Microreview [book]: Be the Serpent, by Seanan McGuire

When Sorrows Come, despite having that particular title, was ultimately a novel of uplifting joy. It was the story of October and Tybalt’s wedding and even though there may have been gallons of blood spilled (as may be expected by this point in the series), it was perfect. That wedding was never going to go off without a hitch, but the wedding happened, they got married, it was absolutely lovely (as was the coda of a follow up novella which covered the reception). It was a gift.

Be the Serpent is not that book and is a novel I’ve both been anxious to get my hands on while also absolutely dreading. This is a novel of betrayal and I’ve known that for months leading into Be the Serpent’s publication. The jacket copy lays it bare “until an old friend and ally turns out to have been an enemy in disguise for this entire time and October’s brief respite turns into a battle for her life, her community, and everything she has ever believed to be true.”

Heavy spoiler warning for the series thus far and rampant speculation leading into the novel. I can’t talk about Be the Serpent without major theory discussion and a significant reveal. This is the sixteenth book in the series and it’s fine if you’re starting here but a lot of things are earned because of what came before. 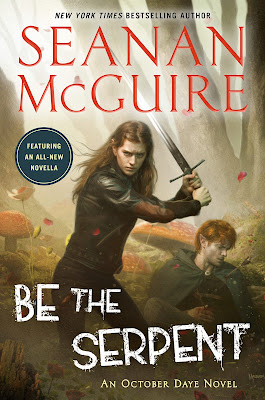 A consequence of Toby finding and returning Oberon to Faerie (despite his flat out refusal to speak) is that readers will start to wonder - if the King of All Faerie can return, what about the Queens? What about Maeve and Titania? Given that Oberon’s most recent incarnation was Officer Thornton, one of theories was that Stacy (Toby’s best friend) might be Maeve or Titania. Another theory is Marcia, the seneschal of Goldengreen (Dean Lorden’s demense). Now, there is no technical reason why the truest lords of faerie should all be hiding around San Francisco - but I’m willing to handwave that away as something that maybe doesn’t matter a ton (it would be somewhat interesting if a major figure of faerie was just chilling out on a mountain in Bhutan but that’s not the story being told here so we’ll work with what we have - though there are plenty of missing Firstborn so who’s to say?)

Spoilers - but Be the Serpent answers one of those questions.

The beginning of Be the Serpent resolves the question of Rayseline and absolutely full credit to Seanan McGuire for redeeming Simon Torquill because she’s about to do the same to Raysel, that broken daughter of Sylvester and Luna. After a bit of a trial and Luna spitting some hate at Toby, Raysel is functionally Toby’s squire for the next year to relearn how to be herself and also discover who she is. Raysel, we should remember, was abducted prior to Toby being turned into a fish and she (Rayseline) was locked away with Luna in darkness for twelve years. Raysel came out damaged (as one could reasonably expect) and had been an active antagonist towards Toby for the entirety of the series so far.

The funny thing is that I’d love to talk about the implications of Rayseline for another handful of paragraphs because I find it fascinating and there are a number of interesting implications moving forward but this isn’t that book. This is just what happened before the story began, as smart and ground laying as the Question of Rayseline happens to be, because the real story is what’s next - which is there is an attack at the house of Toby’s best friend, Stacy.

Toby arrives to find that one of the Stacy’s boys has been attacked, the other son traumatized, and the youngest daughter, Jessica, is dead - and that there is a woman on the loose who is the killer. All that before we find Stacy at the local grocery store magic-stoned out of her gourd and absolutely confused and also that before a magic spell that hasn’t been used in hundreds of years at the minimum is used which caused everyone with Toby (except for Stacy) to not be able to see faerie at all.

Midway through reading Be the Serpent, I started thinking about it as “The Exposition Book With Murder” and sometimes as “The Murder Book, Now with Bonus Exposition” - which sounds like it should be a criticism but it is truly not intended as such because this is the sixteenth October Daye novel and some things are absolutely earned.

There’s a lot of figuring stuff out here and because this *is* the novel where one of the Faerie Queens returns, we might as well start singing “Blame Oberon” to the tune of “Blame Canada” because there’s a lot of blame to go around.

“I interrupted him, causing Tybalt to flinch in anticipation of the response my insolence was likely to inspire. “No, you never did, did you? How many Firstborn, *sire*? How many innocents? How many pieces of Faerie that never got to grow into the pillars they should have been? She destroyed them because you put her in the position to do so. Because you *compelled* her to do so. This is your fault”

Several novels after his return, Oberon speaks! I was starting to wonder if there was some sort of Black Bolt thing where a whisper from Oberon is enough to shatter buildings. So Oberon speaks and is challenged repeatedly by Toby, then a bit by the Luidaeg, and even by Cassandra. It’s delightful.

The bonus exposition I said was earned? I stand by that. There’s a lot of information revealed now that Oberon is talking. As Toby chases down the murderer, there is a sense that this is a Really Big Deal, and when the culprit is revealed it’s an even bigger deal because of the mechanics of how all of this went down and what that has meant for faerie at large. I don’t remember if anyone says “eff Oberon” in this novel but it should absolutely be said.

With all of that said - because I’m only scratching the surface of what I want to talk about when I get to this book in the October Daye Re-Read and can fairly drop every single spoiler into one essay without a hint of shame, I suppose the real question should be about how effective Seanan McGuire is at telling this particular story.

Again, listen, Be The Serpent is the sixteenth novel in the series. As good of a job as Seanan McGuire does in setting up the novel and giving enough of an emotional recap for new readers (and she’s super good at doing that in each novel), I would really, really not recommend starting a series read with Be the Serpent. McGuire is paying off years of work in this novel while telling a brutal story that (also brutally) sets up the next book.

This isn’t going to be a favorite novel because a lot of things go to hell and it’s messy and not at all pretty, but I’m all in on October Daye and Be the Serpent absolutely satisfies and leaves readers with another “holy crap, what?” at the end that is going to make the next year another year of anticipation for book seventeen. What more do you want?
Joe Sherry - Co-editor of Nerds of a Feather, Hugo Award Winner. Minnesotan. He / Him
Posted by Joe at 12:00:00 AM