Ruthanna Emrys’ A Half-Built Garden vividly imagines a late 21st century first contact scenario on an Earth trying to recover from the climate and social ills of our present era. 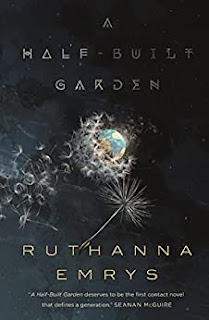 Judy Wallach-Stevens has a problem. Well, as a leading member of the Chesapeake Bay Watershed and tied to many in her communities, she often has a lot of problems, even given her strong and loving and diverse family. The current problem for this late 21st century resident of the Watershed is that the Watershed is the site of first contact. The aliens, however, or more accurately, two symbiotic species from two different worlds, are extremely happy to have discovered another intelligent species. But they bear a message, a warning and a messianic zeal in that message. Intelligent species invariably, in their experience, and in the worlds they have visited, destroy their home planets, and so like leaving the cradle, humanity must leave to live in space. Judy, however, and the rest of the Watershed, have been working hard to try and make the climate changed ravaged Earth better. They aren’t there yet, but at this point, Earth is approaching the status of a half built Garden, one that they are loath to leave.  But other factions and powers may feel very differently, and what will the aliens do in the face of such resistance?

This is the story of the titular A Half -Built Garden, by Ruthanna Emrys

A Half-Built Garden distinguishes itself as a first contact novel unlike any either by virtue of its temporal and political setting. First contact stories that take place in the modern day are a dime a dozen and a cliche even in movies. First contact stories set in the past are a minor note in the genre of SF, but much more common  is future first contact, but with humans as an interplanetary if not an interstellar species.

What Emrys does here is have first contact on Earth, in a late 21st Century Earth that is trying to recover from the mess of earlier decades and find a sustainably way forward. While there is a boomlet of novels that are set in this low-to-medium term future and exploring the many ways our world might go forward, good, bad, mixed, or bad, mixing in a first contact story is adding peanut butter to that chocolate and enhances both.

As far as that medium term future, it carefully balances, between the problems in 21st century Earth, and the potentialities of what we might achieve. This is not starry eyed future, this is an Earth that has been through a lot between 2020 and the 2080s in which the book is set, and Emrys makes it clear there have been high costs to make it this far. While climate change and its effects are the obvious thing for Emrys ro explore, and how humans are learning to deal with those changes (and suffering under them to be clear), there is much more. There has been strong political change, in the role of local (hyperlocal) polities, the watersheds, as well as what has become of national entities, and corporations as well. The tripod is the most unstable of structures, as the 1984 Dune movie tells us, and Earth in the 2080s rests on a tripod of hyperlocal Watershed networks, corporations and national governments. Emrys’ imagination of how these three interact, conflict and work with each other is inventive and vivid. One of the best set pieces in the book is to visit an artificial island of one of one of the corporation, to really get a sense of how “the other third” really lives. In addition to showing what the new life in the watersheds is like, Emrys has a lot of worldbuilding to get across in terms of what corporate life is like, and what governments are like as well. She does a great job in immersing but not drowning the reader.

If I had to pick recent science fiction works that resonate with this future that Emrys posits, ways of getting out of the mess we are in, not unscathed, but building toward better futures, I would recommend a reader look at Karl Schroeder’s Stealing Worlds, L.X. Beckett’s Gamechanger, and Kelly Robson’s Gods, Monsters and the Lucky Peach. The answers and responses to the crises that each of these books are somewhat different from each other and from Emrys, but it is the imagination that it is a holistic change and approach to describing those changes and approaches to society on a broad scale is what is needed to manage the 21st century.  Be it the Dandelion networks of the Watersheds of Emrys own work, the artificial realities and entities of Schroder’s work, or the gamification and response to problems in Beckett’s work, or the aggressive studying of the natural world (to the point of time travel to learn about older systems) of Robson’s work, all of these works, with Emrys as the newest, show that it will take a multimodal, multidisciplinary and broad approach to get through the crises ahead of us. And, that, most importantly, even a half century or more in the future, even if we get our act together, it will be only partially done, a Half Built Garden at best. Not that the aliens who arrive have such faith in planetary systems.

So now let’s discuss the aliens. Aliens, if you have read Emrys’ cosmic horror novels (starting with Winter Tide) you know that she can write aliens quite vividly. Here, her aliens are own creation, a pair of symbiotic and very different species who otherwise harmonize together in interesting ways. The exosociology of the aliens, the Plains Dwellers and the Tree Dwellers make for a fascinating case study of how to build aliens, make them believable, and avoid the rubber forehead approach to alien species. Their viewpoints are alien but ultimately the reader (as well as the characters) need to work through them to make accommodation with them, and respect them, especially when they are at odds.

But what is really important, to the aliens, to Judy and the other humans, and to the novel, in general, is the theme of family. Once again, family, by blood, by relationship, by choice, building networks (one could even say dandelion networks) of families, of people all connected together, sharing values, strengths, weaknesses, triumphs, tragedies, challenges and more all together is a theme that goes all the way back to Winter’s Tide and so is a recurrent theme in Emrys work. It may be spoilery in the traditional sense, but it is such an important theme of her work and this novel, to say that yes, aliens and humans build a found family together. I find this to be an act of hope, a declaration that we are stronger together, and it provides not a hopepunk in the new sense of the word (and it is not Sweetweird either) but an optimism that we can bond together, overcome differences, and try and fix the world that we have done so much to ruin, and to go forward to the stars.

Kim Stanley Robinson and his novel Aurora also come to mind, and in some ways this novel feels like a response to that novel in some ways, showing both sides of the problem. That novel, for those who have not read it, takes the position that we really only have one world, this one, and humanity as a species really can only exist and thrive on this planet, and that efforts to live off planet, be it on an alien planet, or even on a colony ship in space to get there, are doomed to disastrous failure--that such efforts take away from the important work that needs to be done to fix our own world here, a world that is infinitely easier to fix and make more habitable than an alien one in another system or a colony/worldship.  Emrys does not take a definitive position on this question, having her aliens refuting the premise (and in fact, arguing its exact opposite), but her human protagonists definitely show that abandoning “the cradle” as the aliens believe is the fate of all technological species wanting to avoid suicide and extinction is not the answer.  Thus, they are more aligned with Robinson’s point of view but are not completely dogmatic about it either. Some of the best crunchy conversations and discussions in the book are between these two competing theses and outlooks.

In the end, A Half-Built Garden is extremely successful science fiction, starting with Earth and adding in a good helping of space opera (although I lament there could have been done more with the Aliens' homeworld). One final bit of grace note, one sign for me personally that I really engaged with the ideas and setting and concepts of a space opera novel is: would I want the folks at Paradox Interactive to look at some of the ideas explored here and to put them in their grand sprawling space opera game Stellaris? That is a most definitely and definitively a yes. The novel ends with a good and solid conclusion, providing a complete and extremely excellent single volume story. If you as a SF reader have any interest in reading first contact stories, this IS the 2022 novel for you, hands down.

+1 for strong and abiding thematic resonances, from family to climate change.

Penalties: -1 Would have liked to have seen a little more inside of the Aliens’ world.