A playful tone, witty banter and a nautical lesbian murder mystery underscored by a keen awareness of gender in the Edwardian world make this romance almost as delightful as the previous book. 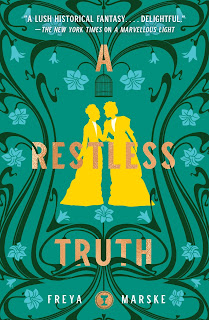 Following on from A Marvellous Light (in which our unmagical Edwardian protagonist discovers the secret magical society of Britain, which in a shocking coincidence needs his help in a matter of the highest stakes) and the discovery that Robert Blyth can see the future, and may need to use this power to help British magic, A Restless Truth picks up with Maud, his younger sister, who has followed his visions and investigations to fetch an elderly woman (another member of the Forsythia Club) from the USA so that they can safeguard her piece of the Last Contract. Of course, this does not quite go to plan, and instead of a leisurely cruise across the Atlantic back to England, Maud finds herself trying to solve a murder and elude thieves, all while trapped in a boat and uncertain whom to trust.

Where its predecessor rushes us throughout magical Britain on a somewhat whistlestop tour of the world Marske has created, A Restless Truth slows things down a little. The scene has been set, the stakes made clear, for what's going on in the overarching plot of the series, so there's time to leave our new protagonist Maud all at sea (wahey), and allow us to get to know her a little better. In fact, as Marske has Maud point out several times, the time spent travelling aboard ship is a liminal one, and the story plot mirrors this large - it embraces wholeheartedly that it's a middle novel in a trilogy, and instead of trying to alleviate the problems that normally brings, instead, it leans in hard.

And, for the most part, this works. It's not a book trying to be a dramatic start or end. Instead, it's a story that's all about how the pieces fit together, how beginnings become ends, discovering and changing. There's still a proper story to it, of course - Maud has her murder to solve - but in terms of where it fits into the metanarrative of a trilogy, Marske has embraced the middleness, the necessity of taking those fledgling ideas of Book 1 and fleshing them out, using them to lay the groundwork for the dramatic ending piece, and made a conceit of it. It is, overwhelmingly, a book about contextualising information we already have, or expanding it, with a murder mystery as a way to hold it all together, but somehow, because we're in on the joke, it doesn't feel all that clunky. And the information is really well integrated into the story as it's told - there are a number of characters who feel the need to tell Maud things about how the world works, but each time it feels very natural, very of the moment and necessary, and so it's easy to let that flood of information pass by unremarked.

Of course, part of the reason it feels so natural and necessary is that Maud is painfully naive. Where Robert as the protagonist of A Marvellous Light is ignorant of magical society, he is at least relatively worldly beyond that sphere - he confidently inhabits the world as he knows it in exactly the way you'd expect someone from the Edwardian nobility to do. Maud, however, is younger, more sheltered, and obviously a lot more female, and so her experiences of the world outside her parents, her brother and her close friends are... limited. Which is great, because it means she needs to be told things about magic, about the society she lives in, that we, as readers need to know. But it's also not great, because it doesn't always make her a fun character to live inside the head of. She has a number of "oh sweetie no" moments throughout the plot, and they're all very realistically done, I can see exactly how things lined up such that we'd be where we were... but that realism made them awkward and uncomfortable to read.

Luckily, Maud is balanced out by our other protagonist. Much like Edwin's magical expertise and introverted personality existed in A Marvellous Light as a pleasant contrast to Robert's labrador-jock energy, so here Maud's naivety wrapped over a core of solid self-belief and determination are counterbalanced by the very worldly, scandalous, but (unsurprisingly) haunted and insecure Violet. Violet has run away to the US in a flurry of gossip and is returning to Britain to claim a fortuitous inheritance. Violet is absolutely determined to be thought of as a strumpet and a scandal, and delights in knowing what's what - magically, societally and indeed, romantically. But this is where some of the awkwardness comes in. While Edwin is a shy love interest, he comes into the story knowing himself, his preferences, his sexuality, and so it's about them both realising there's a mutual interest. In A Restless Truth, we need to watch Maud... discover lesbians are a thing. And how sex works. And how porn is sometimes unrealistic. It's... a lot. Mostly well-managed, and with a surprisingly good use of what felt like period appropriate language to communicate what was being discussed (although, warning for those of a delicate constitution, the c-word gets dropped frequently and with casual abandon). But even the best handled version of the story still has a fairly short amount of time (the boat journey is less than a week) for someone to go from nought to romance. On the whole, I think it's good, and in some ways the ending has a pleasing realism that is often lacking in this kind of story, but it doesn't have quite the impact Marske manages for the romance between Robert and Edwin.

Outside of the dynamic between Maud and Violet, there are some wonderful characters and interactions - the curmudgeonly, dickish Hawthorn from A Marvellous Light makes a return, and even gets a genuine character arc, as well as all the best dialogue lines. There are also several old ladies who do not get relegated to the background, and in fact have interesting and genuine impacts on the plot, in ways that older female characters rarely manage, which was a delight.

We also get one relatively major character who isn't from the British nobility, and while we could have done with more of his dialogue and general story, Marske does use him to undercut some of the upper-class-overwhelm she's created, and remind us all that most of the cast of characters are living lives of extreme privilege. It's not entirely enough, but it is there, and when he does speak, Alan Ross brings something entirely necessary to the page. I'm hoping this is something we see more of in the third book of the trilogy. Alas, the same can't be said of race - one black American character (a singer) is introduced extremely briefly, but her page time is negligible, and the hint that we get when she's introduced that more might be done with her role in the story is quickly abandoned.

What does come through pretty hard, and that was mostly missing from A Marvellous Light, is an awareness of gender and gender roles in Edwardian society. Some of it is the bits you'd expect - Maud is a keen supporter of suffrage and wants to go to university - but some of it is also the flip side, with both Maud and Violet at times weaponising their femininity to get what they want from other people. At one point, Maud does so to one of the people working on the ship, and we see the scene through Violet's eyes, with an appreciation and a disdain for the manipulative nature of it all. Likewise, we get Violet's story of a woman "ruined" by sex and scandal, and going from British high society to being an actress in America, and how that impacts her day to day, how she is seen and how she has to curate her image, and critically, how she is fully aware that her survival in the role of strumpet is only possible because of the fortune she's inherited. None of these are the focus of the story, but they demonstrate Marske's interest in having us really inhabit the protagonists' realities, and they're all details I thoroughly enjoyed.

As well as these themes, the major one that runs through not just Maud's story but Violet's and even Hawthorn's as well, is the idea of how our families make us who we are - whether by example, by force or by leaving us determined to be the opposite of their expectations, and how different people reckon with that as they grow, or how they are unable to do so (because magic can make abstractions entirely real, for exciting heavy-handed metaphors). Within the major plot, there are a lot of threads about legacy, about what we leave behind, and the people it's left to, and about coming back to the things that made you who you are, and maybe realising you missed some truths, or assumed things unfairly as well. What we got in A Restless Truth was really well done on these, but the fullness of it won't be seen until we get the resolutions in the final volume.

On the whole, A Restless Truth is a good sequel to A Marvellous Light - deciding not to do entirely the same thing all over again (which would have been so easy to slip into), but instead embracing the need for a more settled, character and exposition-focussed interlude, before we presumably resume the action in book three. It lacks some of the impact and charm of its predecessor, but still manages enough joy and sparkle to be entirely worth the read, and makes me just as keen as I'd hoped to be to read the final volume of the story.

Bonuses: +1 for old ladies in a story with actual agency and influence on the plot

+1 giving a previously shallow and unlikeable character depth, hints of backstory and some incredible one-liners

Penalties: -1 could have done with expanding some of the points on class into more fully realised plot threads