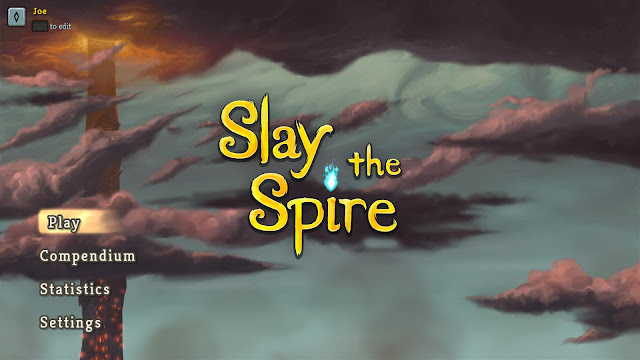 Slay the Spire leaves behind most of the extraneous video game disciplines to focus on what matters most for the genre: gameplay. Does it have an elaborate art style? Nope. Story? Absolutely not. Dazzling special effects? Unnecessary. Gameplay is king here, and in that, Slay the Spire excels. 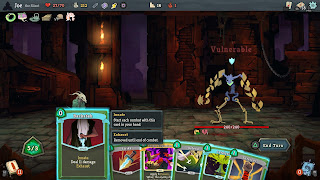 Easy to learn yet challenging to master, Slay the Spire introduces the player to its first character, Ironclad. Ironclad’s deck builds can go several ways, but primarily lean toward a strength build (try to boost your attack strength as high as possible), an exhaust build (use cards for free with the Corruption card and draw/grow your defense with Dark Embrace whenever you use a skill), a barricade build (stack your defense as high as possible, then use a Body Slam Card for offense), or a status deck (combo Fire Breather with Evolve and status creating cards to deal massive damage to all enemies). Initially, none of this matters, but as the game goes on and the challenge is increased, figuring out which deck you want is imperative to surviving a run. 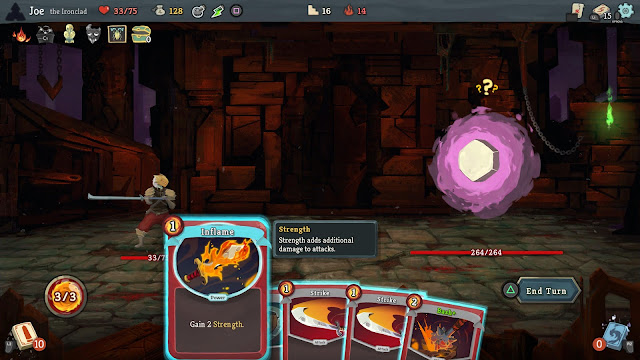 There are five types of cards in Slay the Spire; attacks, skills, power cards, status cards, and curses. And three rarities; common, uncommon, and rare. Attack cards are pretty straightforward, they're the game’s primary way to deal damage to enemies. Skills, the most versatile of the bunch, can do anything from granting the player defense to reducing the enemy’s attack power or even inflicting a status ailment upon them. Power cards also have varying uses. Once they've been played, they’re in play for the remainder of the battle they’re activated in. These cards can do anything from causing damage whenever a status card is drawn to granting the player passive defense every turn. Status cards and Curse cards both bloat the deck, with Curse cards being the more malevolent of the two. Though, if I’m being honest, any wasted card slot can end up killing you (unless you're running a Status deck). 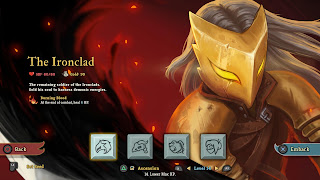 As I discovered synergy between the different card types, I realized the cards I found utterly useless just had a very comfortable home in a different deck type. Once I found that I began experimenting more and more, creating fantastic decks that felt good and engaging to play. A deck at the peak of its synergistic momentum is exciting. As I unlocked cards and watched them trigger the effects of other cards, I formulated the blueprint for decks that would better deal with specific enemies. In combination with relics (passive items that consistently affect your run), a lucky run can make you feel like a strategic mastermind.

Unfortunately, due to the nature of roguelikes, finding synergy doesn't come with every run. Yes, the player can choose from three cards at the end of each combat or sometimes when they enter a “?” room, but as the difficulty of the game increases—specifically when attempting ascension mode—the player’s luck when it comes to choosing cards significantly decreases. I discovered that my favorite type of deck was a status deck with the Ironclad character. It works like this: you get a Fire Breathing power card (deals 6 damage (10 if upgraded) whenever a status or curse card is drawn). Combo that with an Evolve card (When you draw a status card, draw another (draw 2 cards when upgraded). Then you fill the deck with cards that add status cards during combat, pick up the Mark of Pain relic if you run into it (adds two wound status cards into your deck and gives you one extra energy), and you’re set. Every time you draw, your hand fills up and you do massive damage to all enemies. The problem is that when on higher difficulties, the game doesn't always give you cards that work well together. I understand the idea of working with what you’ve got, but you literally can't sometimes, and that isn't fun. I hate feeling like I wasted my time because of something I couldn't control (in a game, of course. But also being stuck in traffic is the worst). Going in with the idea that you want a specific type of deck will end your run, so you have to keep an open mind. That being said, the game should always give you an option to build some kind of cohesive deck instead of wasting your time. I had gone fifteen runs in a row without a solid deck at one point and lost them all. Once the game gave me half-decent choices for two runs in a row, I won back-to-back runs (not without challenge, mind you). 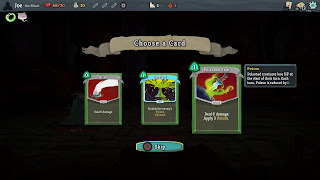 I also found an issue with how bosses can hard counter some characters' deck types to the point of near uselessness. For instance, Silent (the second character you're introduced to), has a shiv deck, which sees the player add a ton of shivs (no energy, low damage cards) to their hand and use them to do massive damage each turn. That said, the player has to use a bunch of shivs to take down a boss. Death by a thousand cuts. One of the end bosses, Time Eater, has an ability that ends your turn after twelve cards have been used, making a deck like this almost impossible to use (unless you get lucky and find an Envenom card that can help). You can't tell which end boss you'll fight until you get to the third stage, and by that time it may be too late to switch up your deck enough to make an impact. 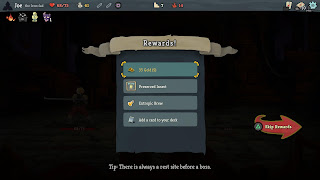 The best part of Slay the Spire’s multiple characters (I tried the four that were available to me) is how different they are. In addition to different cards, each character starts with a specific relic that affects how you approach each play style. This keeps the game fresh and allows the player to switch to a new style whenever they’re bored of the deck types they've been playing with. Each character also receives exclusive relics throughout each run that are tailored for specific decks. Hours and hours of experimentation are on the table before you feel you have a good grasp on each character. Characters you may have thought were boring start to create more options as you unlock new cards for their potential decks, and then the real fun begins. Getting all the cards unlocked and at your disposal (when you're lucky enough to run into said cards) doesn’t take too long, and in the meantime teaches you the basics of each character. The pacing for the unlocks is enjoyable, and regardless of whether you finish a run or not, your character still gets experience towards unlocking new cards. 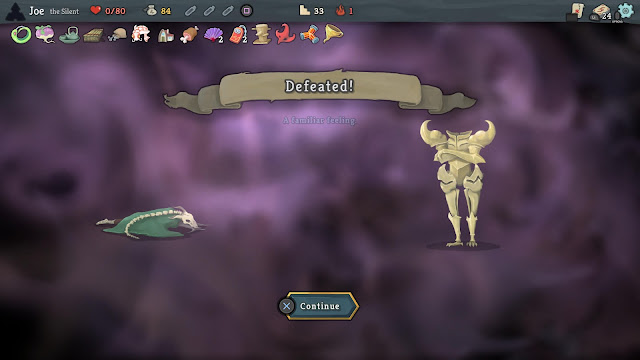 One of the toughest challenges in maintaining a long-term interest in a rogue-lite is creating a luck-to-skill balance that continues to scale accordingly. Unfortunately, the late game's ascension mode doesn't quite get this right as the game relies heavily on luck. Other than end-game content, Slay the Spire is a great game to jump into and learn. The characters are all unique and fun. The deck synergy can be a blast. And the challenge is ever present. Any mistake can end your run, so bring your A-game whenever you make a move. If you like strategy, challenge, and the ever-looming fear of death of a roguelike, Slay the Spire is well worth investing in.
The Math
Objective Assessment: 8/10
Bonus: +1 for excellent card synergy. +1 for distinct character decks.
Penalties: -1 poor end-game balancing. -1 hard counters against specific decks.
Nerd Coefficient: 8/10
Posted by: Joe DelFranco - Fiction writer and lover of most things video games. On most days you can find him writing at his favorite spot in the little state of Rhode Island.
Posted by Joedelfranco at 12:00:00 AM