R. B. Lemberg is a queer, bigender immigrant from Eastern Europe to the U.S. R. B.'s Birdverse novella The Four Profound Weaves (Tachyon, 2020) was a finalist for the Nebula, Ignyte, Locus, and World Fantasy awards and was an Otherwise Award honoree. R. B.'s poetry memoir Everything Thaws was published by Ben Yehuda Press in 2022. Their stories and poems have appeared in Lightspeed Magazine's Queers Destroy Science Fiction!, Beneath Ceaseless Skies, e Are Here: Best Queer Speculative Fiction 2020, Sisters of the Revolution: A Feminist Speculative Fiction Anthology, and many other venues. You can find R. B. on Twitter at @rb_lemberg, on Patreon at http://patreon.com/rblemberg, and at their websites rblemberg.net and birdverse.net. 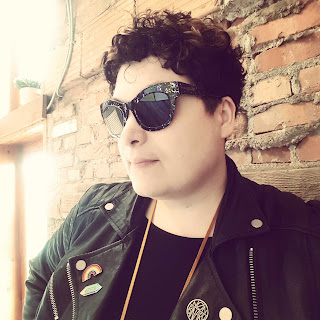 Today, R.B Tells us about their Six Books
1. What book are you currently reading?

At this particular moment I am deeply engrossed in  the work of Julian Talamantez Brolaski, a two-spirit and trans poet whose words I discovered by accident, reading through trans oral histories at the NYC Trans Oral History Project. Brolaski's poetry speaks to me on a very deep level - it is linguistically border-crossing and stunning and painful in all the best ways. I am reading its poetry collection Of Mongrelitude, which is astounding really. You can find its poetry at the Poetry Foundation and elsewhere. https://www. poetryfoundation. org/poets/julian-brolaski
I'm going to take a moment to recommend another poetry book, Words for War: New Poems from Ukraine, edited by Oksana Maksymchuk and Max Rosochinsky (2017). It's a powerful collection of translated Ukrainian poetry, which discusses Russian Federation's violence in Ukraine before the current war began. I can imagine that in a year or two we will have new collections of war poetry focusing on the current conflict, but meanwhile, this valuable and hard-hitting book is here as well.
2. What upcoming book are you really excited about? 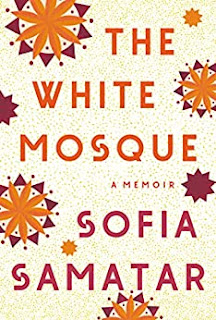 I am beyond excited for two upcoming books by Sofia Samatar: her memoir The White Mosque, coming out in October - I have been waiting years for that; and her newly announced book The Practice, the Horizon, and the Chain, which was just announced from Tor. com. Everything Sofia writes reduces me to ash, from which can only hope to rise again in better plumage; I cannot wait, really.
3. Is there a book you're currently itching to re-read?
I am a rereader, and especially at difficult times. It's been difficult times rather endlessly, lately. My brain has short-circuited and I've been rereading things I have not touched in ages, especially nonfiction and poetry. Right now I am rereading Meletinsky's "Edda and the Early forms of the Epic" (in Russian), which is a book I always wanted to have and which Meletinsky sent to Alan Dundes. When Dundes passed away, I got this book and "The Tale of Kind and Unkind Girls." I have a note inside the Meletinsky book which says in faint pencil, "Rescued for you. Mabel" (Thanks, Mabli). Years keep passing. Now that the Russian Federation is committing acts of unspeakable horror in Ukraine, I am reevaluating everything I ever felt about the Russian academy, but it is a good reminder for me that Meletinsky and Dundes both existed before the world tumbled even deeper into the abyss. This is not very cheerful now, is it? Sorry. I keep thinking about scholarship, and how the work I've done early on in historical linguistics and folklore has shaped me, and how I yearn for a world in which international scholarly camaraderie was not tainted by genocide. Perhaps that world never existed. Anyway, I am rereading the book.
4.  A book that you love and wish that you yourself had written.
I don't want to write anybody else's books, but I admire Eduardo C. Corral's Slow Lightning, Sofia Samatar's collection Tender, Le Guin's The Lathe of Heaven (an imperfect book, but still), but beyond anything else I want to write my own yet unwritten books.
5. What's one book, which you read as a child or a young adult, that has had a lasting influence on your writing? 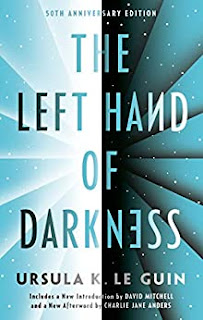 Hm, Le Guin's Left Hand of Darkness, I've discussed this one endlessly I feel; it spoke to me, and more importantly it made space for me - an imperfect and painful space, but space nonetheless, where no space existed before. Aleksandr Grin's novels and novellas (in Russian) set in fantastical Crimea, simply because he dared make his writing so lyrical, so fragile, so wistful and so ornate, despite all the hardships of his life and despite how strange his works were in the context of his time. It was a certain kind of bravery I now associate with queer writers.
6. And speaking of that, what's your latest book, and why is it awesome? 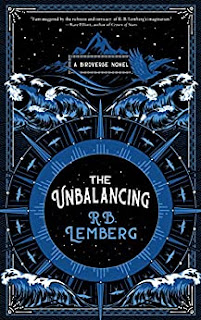 My upcoming Birdverse novel The Unbalancing channels some of Aleksandr Grin's writing about the sea into a story about the price of queer utopia. It's a story of community's faults and triumphs, a story of magic and caring for something imperfectly, a story of monumental failure, and at the same time it is a queer romance with an extra cat. I recommend it to people who want more nonbinary worldbuilding and who do not need everything to have perfect resolutions, because this one doesn't, and life doesn't, but the romance story holds true (and the cat survives).
Thank you, R.B!
POSTED BY: Paul Weimer. Ubiquitous in Shadow, but I’m just this guy, you know? @princejvstin
Posted by Paul Weimer at 12:00:00 PM