Sometimes answers are overrated, and vibes are all you need. That’s definitely true of High Times in the Low Parliament, where a weird setting and eccentric interpersonal drama vastly overshadow the plot – and to great effect. 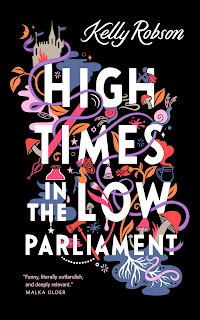 Baseline Assessment: 7/10
Bonuses: +1 impeccable vibes
Penalties: -1 would have been enjoyable to see a little more of the secondary characters
Nerd Coefficient: 7/10
Reference:  Kelly Robson, High Times in the Low Parliament [Tordotcom, 2022]
POSTED BY: Roseanna Pendlebury, the humble servant of a very loud cat. @chloroform_tea
Posted by Roseanna at 12:00:00 AM