Review: The Daughter of Doctor Moreau by Silvia Moreno-Garcia 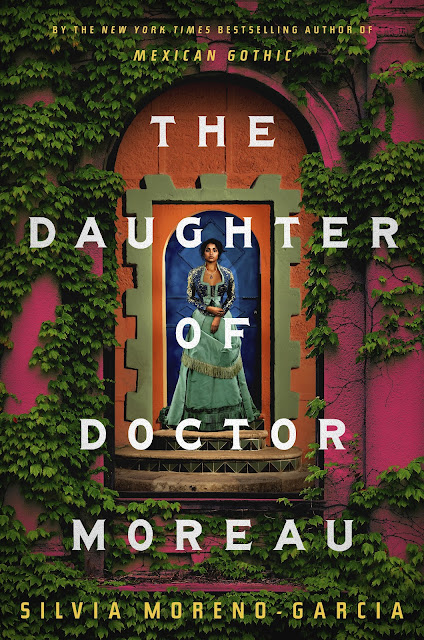 Is this novel a retelling, a remake, a reimagining, a reboot, a requel? I'd call it a reclaiming.

The original book that inspired it, The Island of Doctor Moreau by H. G. Wells, bears several hallmarks typical of Victorian adventure fiction: a properly educated Englishman ventures into the scary jungle and is quickly forced to dodge the infighting of the locals before he makes an eager return to modern civilization. In a new version of the story, The Daughter of Doctor Moreau, author Silvia Moreno-Garcia takes that premise and turns it on its head: no, when the white man sets foot in the tropic, the dangerous thing about that interaction is not the tropic; no, the locals are not aggressive by nature, but they won't take kindly to attempts at enslavement; and no, home sweet home is not only to be found in the drawing rooms of Europe.

The first chapter deliberately declares this shift in the place of enunciation, when one of Moreau's hybrids asks, "what does an Englishman know about managing anything here? There are no jungles in England."

It's now the locals who get to tell the story. Instead of using an outsider perspective that follows the white man as he enters the jungle and then runs for his life, this novel is told from the jungle, without the othering that so often occurs in adventure fiction written from Europe. Contra Wells, nature is not described with the tools of narrative estrangement, as an anomalous place, full of forbidden mysteries; here nature is simply home. The anomalous, menacing thing to fear is not the tropical heat of the wilderness, but the extremes of coldness that the civilized mind is capable of.

This decentering of the white gaze is a sorely needed change to the classic story. The Island of Doctor Moreau is one of the foundational works of science fiction, but it's also appallingly racist. In some passages, The Daughter of Doctor Moreau reads like an effort to correct what was wrong with the original by adding background information that Wells didn't include, but which stands out as essential when one compares both books. Where Island merely portrays the character of Montgomery as a bitter alcoholic, Daughter does the work of exploring why he's a bitter alcoholic and how his life story influences his atttitude and his actions. Where Island presents us a Doctor Moreau comfortably settled in the remote jungle where he has built a fully furnished laboratory by himself, Daughter questions how much he could have achieved without live-in servants and a rich sponsor. Where Island believes that the purpose of creating the animal/human hybrids can be pure scientific advancement, Daughter understands the potential for oppression and explicitly states that the hybrids are intended to serve as cheap subhuman workers. Where Island uses the hybrids as token monsters for the hero to flee from, Daughter demands empathy for the hybrids and makes them the protagonists of a moral tragedy.

Lastly, the most important alteration is the titular daughter. The original book is a boys' club; the only noteworthy female character is a panther hybrid who is only there to be feared and then killed. The film adaptations of the novel have expanded this character into a love interest for the hero. Moreno-Garcia rejects that cliché and populates the novel with women and girls who are central to the plot. The young lady Carlota Moreau is a spectacularly constructed character, pulsating with a fearless love of life and an innate sweetness that accentuates the horror of the events around her. By casting Doctor Moreau as the physician of his own daughter, the author turns him into a representation of male control over female bodies; by including the topic of her upcoming marriageability, the author also brings into the story the convolutedness of 19th-century Latin American classism.

Reclaiming the Western canon by giving it a feminist and/or anticolonial twist has become an established practice for roughly half a century. Christa Wolf and Pat Barker gave a voice to the women of the Iliad, as did Margaret Atwood and Madeline Miller for the Odyssey; Jean Rhys added an entire Caribbean backstory to Jane Eyre; David Henry Hwang brought queer poetic justice to Madame Butterfly; Valerie Martin put Doctor Jekyll under a working-class lens; Bharati Mukherjee made The Scarlet Letter unapologetically her own; Alice Randall cheerfully eviscerated Gone with the Wind; Juan Gabriel Vásquez corrected Nostromo's erasure of Colombia; Kamel Daoud humanized the victim of the remorseless murderer Mersault; and Nancy Springer gave Sherlock Holmes a sister.

Even Doctor Moreau has received this treatment in recent years: both Megan Shepherd and Theodora Goss have written novels that invent a daughter for him.

What Moreno-Garcia contributes to this tradition is the specificities of her Mexican heritage. The timeline she has chosen for her plot coincides with a real historical conflict between native populations and white settlers, a context she helpfully provides in an appendix. By narrating the experiments of Doctor Moreau in parallel with an uprising of indigenous communities against the encroachment perpetrated by Hispanic landowners (a conflict where the English became involved seeking commercial advantage), she places onto the story the weight of the entire historical baggage of the colonial system of racial hierarchy, which assigned legal rights based on ancestry, considered the natives as less than human, and aspired to "improve" indigenous blood by hybridizing it with European blood.

The other identifiable Mexican ingredient in this novel is the romance plot. Yes, this is a story of medical horror and wars of conquest and patriarchal abuse and modern slavery, but it's also a tragic romance story. Carlota falls in love, gets entangled in a love triangle, and suffers inevitable heartbreak with the impetuosity and the fierceness of the best Mexican telenovelas. This is another way Moreno-Garcia has transformed the original story into something wholly new and wholly hers.

The Daughter of Doctor Moreau does more than update a classic. It takes the themes and tropes of canonical English literature, from the period that perfected the novel form, and brings them down to earth in a setting outside the control of English characters and English norms. Instead of the superior attitude of those who proclaimed of anything that didn't fit their categories, "Here be dragons," we jump right into the places where the systems of domination clash against the human spirit. At last, we listen to the dragons.