Currency of War continues the twin stories of a Princess turned Empress, and the love of her life, the brilliant peasant turned Captain of a ship...in Spaaace. 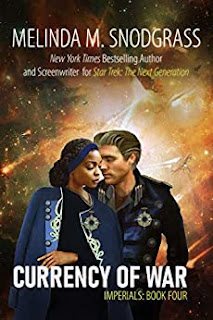 Melinda Snodgrass’ Imperials saga, now in its fourth book, may sound like something out of a fantasy novel if looked at with an unfocused eye. Mercedes, a princess, the heir to a Emperor who has to deal with the fact that in his patriarchal society he only has daughters, sends his daughter to the fleet military academy that all highborn families send a child or two to.  Except, of course, that women, in this patriarchal society of the Emperor and the Five Hundred Families, have never gone to the High Ground before. Meanwhile, take someone from low in the social food chain, as far away from the Imperial family and nobility as you can get, and give him a scholarship to the High Ground based on his diligence and brilliance. Surrounded by the sons of nobles who look down at him as scum, he forges a friendship with the Infanta. More of course would be impossible, given their social situations.

Over the course of the next two books, and decades in time, Tracy and Mercedes meet again and again in various roles, and go through trials and tribulations, Mercedes gains a Prince Consort, but their marriage turns sour. Tracy’s shipboard career is frustrated by those who can’t stand a peasant in their ranks.  Tracy and Mercedes meet again and again, and despite everything, an undeniable love is between them. Usually unspoken, but with enough fire that the two of them, even very distantly apart, and wrapped up with their own problems and issues, remembers and is connected to the other. It’s a SFF romance among the action and adventure that unlike many such in the genre, runs over a lifetime.

However, all this happens not in some fantasy kingdom, but rather in a future space empire, the Solar League, hundreds of years in the future†.  The latest book in this saga, the fourth, is Currency of War.

Currency of War picks up on the heels of The Hidden World, third in the series. The first three novels have had not only time jumps within the narrative itself, but between books in the series. From the end of The High Ground, the first in the series to the beginning of In Evil Times, second in the series, several years have taken place.  From the end of In Evil Times to The Hidden World there is an even bigger gap.  In each of these, Snodgrass does a great job in keeping us up with what our two protagonists have been doing in the intervening years.

Between The Hidden World, though, and this newest book, The Currency of War, there is not much of a gap at all by comparison, only a couple of years. Given that the end of The Hidden World kicked off an interstellar invasion of the Empire, the next novel keeps much of what is happening “on screen” by picking up not too much later.  Tracy is caught up in the whirlwind of being back in the Imperial Service again, and Mercedes not only has to be an Empress in a strongly patriarchal society (and has dealt with one coup attempt already) but be one in wartime.

The story of Currency of War, then is how these three individuals (let’s include Cullen, or “Boho”, the Prince Consort, since he gets a bunch of POV and they do form a triangle) handle the pressures of their positions as the war progresses. If the first book was a coming of age in an Imperial Academy, and the second was Life in the Service, and the third was The Burdens of age and career and unexpected positions, this fourth book is all about War. There are a lot of call backs and thread pulls from the first three novels (and for a bit I wondered if this was a book that was going to end the series--spoiler, it does NOT) to tell the story of an Interstellar War. Mercedes as a Empress and War leader. Boho, trying desperately for relevance and importance.  Tracy, thrust back into the Service again, and finding that some things are different--and many things for a non-noble (intitulado) are very much the same. Some of the tactics, themes and ideas raised in the first three novels come bearing fruit when war threatens the League.

Time, though, as mentioned above, and continuing is a real theme of this series, and I want to discuss it here in detail, because Snodgrass’ use of time in telling her stories, both on the macro level (the story of this Empire), and on the personal level (the stories of Tracy and Mercedes, and the other characters, too, like Cullen the Prince Consort). I mentioned above that the novels time jump within and between books, showing the lifetime, the progression of the characters, and the Solar League itself. The High Ground covers a relatively compact amount of time, their academy days, but as the novels go off to space and career and service, the time jumps between the books and even within the books (especially in The Currency of War) become highly noticeable. This is a saga rather than a snapshot, showing the evolution and development on a grand scale, drilled down to intimate moments. It reminds me of the movie Citizen Kane, where you can have an important key scene take up only a few moments of real time...and then seemingly within a sentence or two, jump ahead ten years.

This novel helps give the novel authenticity in dealing with a space empire and the time it takes for things to happen and for things to be planned and executed. This third novel, which is all about an interstellar war, really brings that home. War plans and strategies, and the production of materiel take effort and especially time, and the novel doesn’t stint on the fact that with the League being rocked by this war, producing new ships and training new crews is not possible at the drop of a hat. We get and see planning for things  months in advance, and are carried along through some of that time period as well, as the Solar League slowly tries to get its act together without being overwhelmed by the enemy. It’s like a game of Stellaris where your main fleet has just been decimated and one of your planets wrecked--you can’t just create new ships out of nothing instantaneously and fix the planet with the click of a mouse.

And yet, while time passes and things progress, the ghosts, haunts, and consequences of decisions and actions of the past come to haunt our three main characters. They are each the sum of the choices they have made throughout their lives and careers, and in wartime, some of those divisions, passions, rivalries, and yes, love, come through and are magnified. Even as being full of infidelity and the rival of our hero Tracy, for example, Boho for example comes across as a very complicated and conflicted character that at turns I wanted to sympathize with, and at other times, wished a bridge would drop on him.  Neither Mercedes nor Tracy either are saints, they are flawed human beings who love each other from afar, and they have made choices and decisions based on it that reverberate and inform the present. Having a saga that spans decades of characters lives, rather than short intense periods, gives Snodgrass a great opportunity to explore all this and she does not miss a beat or trick in doing so.

For all of that, though, the alien threat itself feels a little like a black box, especially as we learn more about them and their threat is faced and countered. I was frankly a little disappointed; a private theory I had running through the book about the aliens and who and what they were did not pan out in the slightest, and in point of fact, the aliens and the threat themselves feels faceless. I think the way Snodgrass has set up these aliens and having them be so mysterious, unprecedented and strange, over the time period of the book, makes them a more abstract threat in the mind of the reader, a general heightening of the tension and a sword of Damocles over everyone, but one that is frustratingly not personalized. For that matter, for all of the excellent action beats we get in them facing the alien foe, it is the beats that are aside from the alien threat that have the juiciest and best material, because we care much more about the stakes and characters when within the culture than dealing with forces without it.

We don’t learn much if anything new about the society of the Solar League, although having alien POVs added to the main three continue the “ground levels aliens” point of view we got starting in the last book.  I do want to point out that the novel continues to show a fascinating potential, if aristocratic and patriarchal future among the stars. It is no coincidence that in this age when women’s autonomy is under threat, a future where women are trying to fight for their personal freedom in a strongly male dominated society feels rather resonant. This is something that the entire series has done from the get-go, and while some things have changed in several decades, in the timeline of the Solar League, it is chipping at a whole asteroid full of privilege.

Although you could theoretically start here in the series, it is a heck of an awkward place to do so, given that it falls so on the heels of the last book and really reading the last book gives insight to a key piece of knowledge that the reader should have, but two of the main characters decidedly do not. And the tension between the reader knowledge and characters knowledge helps really drive and stoke the drama of some key parts of the book. I’d recommend starting with The High Ground, first, but if space academy adventures are not your thing, then In Evil Times works as a better starting point, than here. This novel concludes but doesn’t really come to an end except for a wham moment, leaving, hopefully a book five to pick up the consequences of that moment, and hopefully, the entire series.

Read more about Melinda Snodgrass and her work in this Six Books interview I did with her.

Bonuses: +1 for an excellent use of time and how things progress not with the snap of a button but with sustained effort and expenditure. No easy quick fix solutions

Penalties: -1 For all of the theme of War, the aliens themselves take a back seat in development and interest to the intra Solar League conflicts and personalities.

Reference: Snodgrass, Melinda, Currency of War (The Imperials Book 4) Prince of Cats literary Productions 2021
Posted by Paul Weimer at 12:00:00 AM