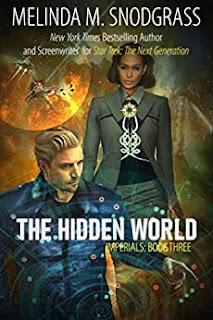 It’s been 14 years since the events of In Evil Times. Tracy Belamor, after falling on his sword to cover up some rather dark things that the Empire has done, now lives a new life under an assumed identity as a spaceship captain. Meantime, Princess Mercedes, The Infanta, still has no children of her own, her husband is unfaithful, and the life that she imagined has not come to any sort of fruition. Cold duty has won out over all other concerns.

Now, In The Hidden World, third in Melinda Snodgrass’  Imperials series, we see how those 14 years have shaped Tracy, and shaped Mercedes, not always for the better, as forces rising against the Empire from without, and within, threaten the existing order, and more importantly, threaten the lives of the characters.

It’s an interesting challenge to write a series with relatively large time jumps, where there are often drastic and irrevocable changes in the characters that have occurred off-screen. It takes a strong hand on character and plotting to handle a series in general, and keep everything on track so that a reader can get into the flow of a story. I have discussed in other reviews the perils, problems, challenges and opportunities of trying to keep readers on track on a series, especially complex ones with many characters, subplots and settings. There are any number of ways of handling this, from prologues and recaps to folding in recollections, memories, and other techniques to invoke events in the previous book or books.

The Imperials series by Melinda Snodgrass has an interesting variation on this problem as there is a five year time jump between the first and second book, and here, an even bigger time jump of 14 years between the second and third books. This helps reinforce and clarify that the Imperials novels are on a wider scale in personal terms than most space opera. Rather than taking place in some months, or a few years, the Imperials series takes place over the effective career lifetimes of its two protagonists, Tracy and Mercedes.

What this means - and I didn’t recognize it in the second book, but now clearly see it in the third - is that the author has chosen to basically restart the series with every iteration, and layer in the backstory of the previous novels as needed. For Tracy this has been the easiest. The first novel, The High Ground, is the story of him at the titular Space Navy academy. In Evil Times, the second novel, sees him as a put upon junior officer in that self-same Space Navy, the events of the first novel informing the narrative, but not necessarily immediately pertinent. This third novel, The Hidden World, has Tracy as a captain of an independent ship, under another name, living a life that at first also seems to not have anything to do with his previous one. Or most definitely not at first (the first chapter doesn’t even identify him as Tracy at all!) . But like the second novel to the first, thematically, plotwise, and otherwise, the resonances in Tracy’s story comes through, even as his situation is “rebooted”

Mercedes has it somewhat tougher as a character because in this strongly patriarchal society, even as the Infanta, the heir to the Empire, she has a very circumscribed and more limited freedom of action and motion than Tracy does--and Tracy has far less money, power and influence. (In many ways, these patriarchal concerns are part of the POINT of the series). In the first novel, Mercedes is a cadet at the academy, just like Tracy. In the second novel, In Evil Times, she is also an officer in the Navy, gets married, and tries to walk a tightrope between being the Heir to the Empire, being a good wife, and being a good officer. The novel masterfully tries to show how someone can have a variety of roles and social and political positions within one person in a way that we generally don’t see much in our 21st century society, aside from, say, members of the British Royal Family on active duty in the army, but even then, their power as members of that Royal Family is about nil, unlike the much more empowered monarchy of the Empire.

In this third novel, Mercedes is no longer in the Navy, and she is running the monarchy in a very real sense for her ailing and declining father, not that anyone really admits or says openly that is what she is doing. Her Naval days are seemingly behind her, her time is in the palace trying to keep the Empire together. Her marriage is a mostly loveless shell, her husband has affair after affair, and despite all of her efforts and hopes, she has not managed what is paramount in the strongly patriarchal society and a royal family to boot--she has not produced an heir.

There is also an interesting flash backward with the title names, too. In Evil Times certainly reflects the events of its novel, but it also points toward the events of the first novel. And this new novel, The Hidden World? Sure, there is a Hidden World in this novel, and an interesting and intriguing mystery about it. However, we saw a Hidden World as a key and crucial bit of In Evil Times, a set piece that revealed a lot about Tracy and Mercedes alike that helped inform them as characters, reunite their individual plots, and helped set up the culminating action of the novel and the two characters divergent opinions and actions concerning.

This sort of overlapping of character beats, motifs, plot elements and strands of worldbuilding, is then, Snodgrass’ answer to the question for this series as to how to keep the reader engaged and knowledgeable about events, reward long readers of the series, and continue the balancing act of series fiction. It’s a testament to the author’s long experience with series and serial fiction formats that she has honed her skills in this regard.

So with all of that discursive discussion of series books out of the way, what do we have here in The Hidden World? For most of the novel, the vast majority of it in fact, we have two completely different narratives here at work. With Tracy running a small trading ship with some very extracurricular activities, his story is a story of found family, a tight group of humans and aliens working together, and a “street level” view of the Empire and how the relatively unempowered have to survive on, almost literally, scraps. It’s a throughline and plotline recognizable in forms such as Firefly, Farscape, and even the more recent Space Sweepers. Despite themselves, though, Tracy and his crew wind up getting caught into and part of larger and more serious events.

And that’s where Mercedes comes in. She is at the very heart and center of power for the Empire, an Empire which is ailing not only because of the health of her father, but because of the withdrawal of the genetically engineering Cara’ot aliens[1] at the end of the second novel, 14 years ago. This withdrawal has shaken humanity, and now there is a perhaps not unjustified fear (although blown out of all proportion) that the aliens are going to come  back with fire and vengeance. The last 14 years have very much a “War on terror” sort of vibe, and here we get a center seat to those decisions. And when a rebel pirate manages to capture Imperial soldiers and ships, Mercedes is faced with some very ugly choices to make. Choices that will, eventually, bring her back into contact with Tracy.

There is a surprisingly strong third point of view of the novel in “Boho”, the consort to the Infanta, Mercedes. He is as much of a prat, if not more, than in the first two novels. He is openly cheating on his wife with any number of women on a regular basis and doesn’t seem to care that he is humiliating her thereby. It’s all about him and proving that he is still a strong man, a man who can father children, and he is all about the toxic patriarchal strands of this entire society wrapped up into a single character. And yet, for all of that, for all of him being who and what he is, and flirting with those who might seek to replace the Infanta (and her father), he does, kicking and screaming, perhaps, the right thing by the end. He shows interesting complexity, even as the novel makes clear that, in the end, he is still such a character to dislike and much more than for being a block for the star crossed Tracy-Mercedes interactions across this and the previous two novels.

For all of the richness of the characters, their internal and external struggles, and interactions, rest assured, this novel is at its heart, space opera and knows when to bring the action beats. Although Tracy is cashiered out of the Orden de la Estrella, he is still at his heart someone trained at the High Ground, and knows when he has to be a big damn hero. Mercedes, too, comes out from behind her desk and has to get herself into the action herself. She might be a Rear Admiral but sometimes even Rear Admirals have to lead, even women in a strongly patriarchal society. Even Boho gets some screen time in this regard when things truly spiral out of control. Curse the author for making me respect and root for him.

Hidden worlds, pirates, political scheming, and more fill the novel.The novel intercuts between the points of view effectively, and sometimes very much on the nose, to cut away from the action of one character or thread at a crucial moment, only to raise stakes and tension in the next point of view, and pass it on down the line. There is room and space for breathing, and surprisingly tender moments, but the ratchet effect most effectively pushes one to add a couple of extra minutes to a work lunch break to keep on reading.

The first novel ended with a graduation, the second novel with the withdrawal of the Cara’ot and the personal disgrace of Tracy. Here, by the end of the third novel, The Hidden World, the stakes and what occurs are even larger and more important to the fabric of the Empire and the individual characters. The author continues to build the story of the Empire through the story of its two main characters--the Infanta to the Empire, and a tailor’s son who has always dreamed of much more than inheriting his father’s shop.

The fourth novel is just out at the time of the writing, Currency of War (and my supposition about titles definitely holds given the events of this novel) and I look forward to reading more in the vein of the stories of Tracy and Mercedes.  And okay, maybe Boho too.

[1] They are supremely interested and talented with genetics and genetic engineering of themselves, and others. Think like the Asari in Mass Effect , but without the sexualization.

Bonuses: +1 for an excellent pair of protagonists with vivid story growth.

Penalties: -1 I am frankly not a fan of the cover art of these reissued novels.

Posted by: Paul Weimer. Ubiquitous in Shadow, but I’m just this guy, you know? @princejvstin.