This is not a book that lends itself well to a quick review: it's got too much going on, and is too accomplished, to really be encapsulated in a few hundred words. Unfortunately, with my review brain struggling to get itself in gear these days, that's all I'm going to be able to give it here, but I recommend that anyone looking for a longer analysis of James' work (and how it fits with the theme of the first book in the trilogy, Black Leopard, Red Wolf) check out these reviews by Gautam Bhatia at Strange Horizons, and Alex Brown at NPR.

In Moon Witch, Spider King, we get the accounts of the Moon Witch Sogolon, who played a mostly antagonistic role in the account of Tracker, narrator of the first book. Sogolon's story partly covers the same events as Tracker's, a literary device I wasn't sure about but which ended up being brilliant: Sogolon's perspective is vastly different, and her own accounts begin hundreds of years earlier, covering her childhood and the period of time she spent in and around the Court of Kongor. There, she came into conflict with the Aesi - a powerful, magic-wielding man who has ingratiated himself as advisor to the King, and is in the process of disrupting the matrilineal line of succession (in which it's the King's nephew by his sister who inherits the throne, rather than his direct progeny) by sidelining Princess Emini, the King's Sister. Sogolon sees these events as a low status maid to the princess, but is caught up in something more when the Aesi realises she is the only person at court whose memory he can't manipulate, and that she alone knows what he has done to get rid of Emini. We barely have time to see the tragic results of the showdown between the two before the narrative catapults us 170 years forward, into the events of Black Leopard, Red Wolf and the hunt for the lost "true" heir of Kongor. Sogolon is able to fill in some gaps from her lost years, which make it clear that for her, this is all still part of the same conflict, one which Tracker and his narrative had little clue about.

Moon Witch, Spider King, like its predecessor, has little interest in giving its readers the satisfaction of a "traditional" fantasy story, even as it borrows much of the same worldbuilding DNA: nevertheless, for anyone who found Tracker particularly grating as a protagonist, Sogolon's story involves a very satisfying takedown of his misogynistic worldview, and I found her a much easier character to root for, even as she has her flaws. For me, there was also something about this book that made it feel more readable than Black Leopard, Red Wolf, although it's written with a consistent dialect voice and requires just as much attention to what's happening on the page, so this may just have been my preference for its narrator coming through. This isn't a trilogy for everyone, but it's a really powerful addition to the fantasy canon and as such, for me it's essential reading - if you can, make the time to check this series out, and look out for volume three at some point in the future. 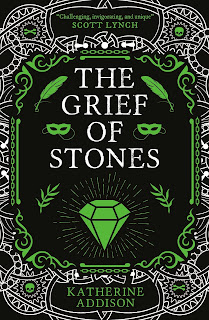 The Grief of Stones by Katherine Addison

I felt somewhat lukewarm on Addison's first story in the Cemeteries of Amalo series, set in the world of The Goblin Emperor - featuring Celehar, a Witness for the Dead who plays a small but important role in the original book - but that didn't stop me from getting excited about the continuation of Celehar's adventures in the provincial city of Amalo. Seeing as my biggest gripe with Witness for the Dead was that it set me up to care about one story, involving an opera murder and a certain handsome singer, only to switch into an episodic structure with a lot less Pel-Thenhior than I had been led to expect. Luckily, Pel-Thenhior is back again in the Grief of Stones, and my expectations about Celehar's very slow acceptance of his feelings (understandable, given the weight of his past trauma and the homophobia of the world he inhabits) were set at just the right level to not get wound up over this again. This is good, because once one's expectations are set, The Grief of Stones becomes a slow but satisfying mystery novel, diving deep into the lives of the people of Amalo and into Celehar's unique position within it.

The central mystery here is around an orphanage for foundling girls, one of whom turns up dead and therefore under Celehar's remit. As Witness, Celehar is able to use magic to speak with the dead and uncover the circumstances of suspicious deaths - or he can be petitioned to settle inheritance disputes, ask after lost objects or crack the secret recipe to a dead relative's delicious scones, if needed. Cases involving the latter, as well as a welcome new character in the widow Tomasarin, who is appointed as Celehar's apprentice somewhat against his will, provide levity that balances against the macabre aspects of his work and Celehar's own tendency towards melancholy. Still, this is a book that spends a lot of time dwelling in sorrow and loss, and, much like Witness for the Dead, it ends with a great deal of unfinished business. I can only hope that the next installment - which may be the last? - brings some much needed peace to Celehar, who deserves a lot more than his world seems willing to give him.