Tara Sim’s City of Dusk starts a series where four young heirs to power both temporal and magical find themselves thrust into opposition with each other as a magical conjunction threatens to upset an already devolving situation. 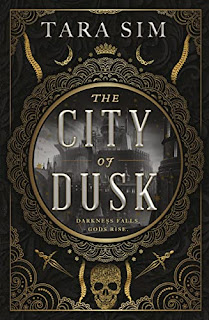 Taesia, Angelica, Nik and Risha all are high in their noble houses, and each commands a different sort of magical power derived from the God their House is aspected to.  Risha is a Necromancer, concerned with Death; Nik’s aspects are literally angelic, complete with wings. Angelica, when she can harness her powers, has elemental abilities quite prodigious; Taesia is a skillful manipulator of shadows.

The realm is in danger, though, with its long needed connections to magical realms (such as the land of the dead) barred and closed for quite some time now. This closure is wearing at the very fabric of society, and magic. There are those summoning demons from the void, Conjurers, and their true purposes are unknown but their destructive practices are clear. The King has no heir, and so one of these four might well be the next monarch. And the four Gods themselves have a plan themselves.

This is the complex story of these four characters, in Tara Sim’s jump up to adult Fantasy, The City of Dusk, first in a series.

The world that Sim creates here is immersive, as are her four main characters. I was thinking recently of inciting incidents in novels (and TTRPGs) and how a novel can use one as the springboard to a plot. Here the four main characters do learn of a forthcoming incident that could upend everything, and we spend the vast majority of the novel in preparation for that event, that conjunction. Sim uses the time and space before that conjunction to develop and reveal her characters, their powers, their weaknesses, their hopes, and to slowly reveal what is “really” going on beneath the surface of a city already under strain and moving toward a big crisis. There are small ones in the meantime that punctuate and deliberate the narrative, but there are long placid stretches where Sim’s focus is on the characters themselves and who they are, what they want to be, and who they think they are. These do not always align, a recipe ripe with drama and character potentials.

There are lots of secrets to uncover and learn in the novel. There is a secret fifth main character who doesn’t quite get the play of the other four, but their revelation and what they are slowly winds into the narrative, and revelations about their role in all of these affairs is important and key. The tapestry that the author weaves here in her worldbuilding and her character development work very well hand in hand in a practiced fashion, drawing the reader along. There is a good set of choices and writing in switching and mixing up points of view.  This works in the  frenetic pacing in the finale, switching between the main characters, especially as the major culminating crisis of the novel hits, but it does mean a slow upramp in the meantime. The novel takes its time in establishing matters with long fuses (too long, I think) before setting things off.  While I was never bored with the characters, when that frenetic pacing in the last chapters hits, it did cause some whiplash. I can see, given the plot and the timing, why that happens as it does but I really think it could have been done in a less jarring fashion.

Although there are four roughly equal protagonists here, to me, the book feels like at its heart it is Taesia’s book. Sure, we get to see a lot from the others perspectives, both external and internal, but since a number of the events in the novel really revolve around House Lastrider, and we see so much into Taesia’s heart, it does feel like this novel is more than a quarter (or twenty percent) of her story by a significant margin. I didn’t mind this, in a cast of characters like this, there is inevitably going to be one that rises above the others, and even if wordcount is identical, in an individual reader (if not the author themselves in their writing), one character is going to stand out a little more. Taesia’s recklessness and fierceness, and being a plot driver really put her head (if not quite head and shoulders) above Angelica, Nik and Risha. And in keeping with the theme of this review, we get her established, and in those frenetic final chapters, Taesia goes through a lot of personal change, quickly. (all the characters do, but in Taesia it  is the most striking and noted).

It should be noted, though that out of the four main characters, I found Taesia’s relationship with her God the least developed for most of the novel. Characters like Nik get themselves on a footing or lack of one right away, but Taesia’s relationship is one that takes time to come to fruition. Like the plotting, though, the last portion of the book tries to have a disproportionate amount in one gigantic gulp, instead, then.

As immersive as the character level world is, and perhaps it is a consequence of choice of point of view, I would like to know more about just why the Gods are doing what they are doing. To say more would be highly spoilery, but even given, so, it is not clear as to the motive. What precipitated their actions as actions? The timing of why the Gods do what they do is clear, based on the conjunction--but their actual reasons for moving the way they do remains frustratingly unclear to the reader as well as the characters. It’s possible that is very deliberate on Sim’s part, that our protagonists being pawns on the Gods’ chessboard and being opaque to their purposes is carefully done on her part. ‘

I want to bring up something here, if you will let me bend your ear for a moment. There is a tendency in genre fiction circles to dismiss all SFF books written by women as YA, even when they are plainly NOT. This is a strategy meant to diminish and dismiss women and their work, and it really is infuriating to see play out time and again. Although the author has written books which are definitely YA, and even given the relative youth of the protagonists, this novel is very firmly adult in tone (and subject matter).

The novel is first of a series, ends with a bang, and leaves the characters in a variety of lurches, meaning that there isn’t any semblance of an offramp here. This is the first of a series. As for me, I hope the second novel does improve its overall flow a bit. Otherwise I think this is a successful change from YA to Adult Fantasy for Sim, and I am curious as to see what will be next.

Bonuses: +1 for a strong set of primary characters, particularly Taesia, all of whom get excellent character development and arcs

+1 for an interesting and diverse world setup.

Penalties: -1 Pacing of the novel, very long build up to the ending, dilutes some of the positives of the novel’s worldbuilding and character development significantly