Microreview [book]: The Ballad of Perilous Graves by Alex Jennings

A magical, musical adventure with a strong dose of chaos 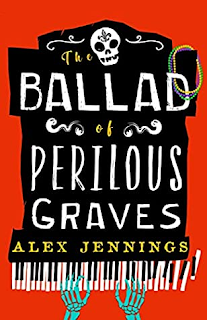 Welcome to New Orleans: well, sort of. The Ballad of Perilous Graves drops us not in the city of our own world, but in Nola, a city full of magic and music (and a lot of musical magic), which at once feels like it must be New Orleans, while also being... something weird and new. This distorted city is home to the titular Perilous Graves - usually referred to as Perry, perhaps because he doesn't seem to quite fit the vibe of a "Perilous" just yet - and his sister Brendy, as well as their friend (and Perry's crush) Peaches and a cast of parental figures, ghosts, musicians, and a combination of the three. But something is going wrong with the rhythm of Nola, something which seems to threaten the city's very existence in ways that don't make sense to our young protagonist. In good old adventure fashion, though, it's up to  Perilous, Brendy, and Peaches to right these mysterious wrongs, bringing back the songs of power which keep the city running. Meanwhile, in a city that really is called New Orleans, a man called Casey returns to his hometown years after leaving (in the wake of Hurricane Katrina) to track down what happened to one of his old friends, and confront the weird, possibly magical, events that led to his departure.

All of this unfolds into a very rich, strange fantasy world, one infused right through with the spirit of New Orleans - which, while not a city I'm familiar with, is one whose reputation and aesthetic is very much recognisable all the way through this book. Nola is also packed full of casual magical elements, most of which exist purely to make the place feel more: trams float in the sky, haints drive taxis, and Peaches, the Graves' best friend, is super strong and lives with a ghost in a strange old house. Jennings doesn't spoonfeed any of this worldbuilding, nor does he concern himself until much later in the narrative with making sense of Perry and Casey's dual cities. Instead, the reader is left to feel out the boundaries of this fantasy and its rules as we go along, in a move that's frequently confusing and demands a lot of attention, but makes for some really magical storytelling as it goes along.

What really makes The Ballad of Perilous Graves different is how that sense of magic shifts and evolves as the book goes on, from something which feels like an adult take on classic kids' adventure fantasy into something more complex and mature, even as it keeps the fun of its early magic in mind. In particular, magic is very linked to the characters who perform it: for example, early on, Peaches tries to explain how to fall without being injured to Perry, by suggesting that he "drop out" of the high fall at the last minute and fall from lower instead. It's a concept that baffles Perry - and which has that delightful "semantically that makes sense but... no" vibe to it that's right at home in children's fantasy (like The Phantom Tollbooth, which gets a couple of shout-outs here) - but it makes sense in Nola because it makes sense for Peaches, this overpowered and undersupervised youth, to be able to do that kind of thing. Similarly, Perry and Brendy both receive personal magical items within the first third of the story, which feels quite early for these types of quests to wrap up, but it means that they have these encounters at a point in the story where their world is just beginning to get more complicated. It's how they use their items in the world they live in, discovering more about that world and their place in it, that becomes the real story here, and it's really interesting how Jennings manages to make that transition from "juvenile" into adult work for his young protagonists.

It helps also that the characters are great fun, and while it's Perry on the front page, his younger sister Brendy gets plenty of time to shine too. Casey's story is intriguingly separate from the other three for most of the book, and is important for the way it grapples with the realities of New Orleans, and particularly the devastation of Hurricane Katrina - Casey is also a trans man, and that affects his past relationships and his decision to leave the city in the way he did as much as the hurricane and his experiences with magic did. I could happily have read more about Casey, and his eventual tie into the main plot wasn't as satisfying as it could have been for me - but he's still a great character and his older, non-magical presence juxtaposes really nicely with the kids particularly in the first part of the book.

Things do begin to make more sense in Nola eventually, though it's not until we spend more time with older characters in the book's second half that we start to understand how this version of the city fits in with Casey's New Orleans. But even then, The Ballad of Perilous Graves keeps things loose and chaotic as it moves towards its big showdown. Some of this chaos is, frankly, hard to follow: I found myself getting confused often, and sometimes that confusion felt like more than standard for "this is a book that's trying to do a lot, is set in a culture that I'm not personally familiar with, and its not spoonfeeding me anything". I struggle to put my finger on what it is about the style or story that causes this - perhaps if I'd read through in a single sitting instead of spreading it out across a week? Whatever it is, it's always frustrating to come out of a book feeling like you didn't get the full experience out of it, and not even understanding why it caused that reaction, and I honestly can't say whether it's my fault or the book's fault - or both? Who knows.

Despite that frustration, though, The Ballad of Perilous Graves is a book well worth reading, and one which I'm glad I persevered with even when it was confusing the heck out of me. I'm really intrigued as to what Alex Jennings does next.