Microreview: This All Come Back Now edited by Mykaela Saunders 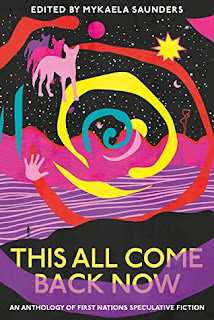 This is a book worth reading simply for the introduction, or the Overture as it is called. Saunders frames the anthology as a mix tape, which I found to be a delightful concept. However, the Overture itself works as a sort of literature review, making it a good place for finding other resources (Australian and otherwise). It perhaps also gestures to the editor's academic background.

Awards, too, have tended to favour non-Indigenous writers of Indigenous stories, though there are signs this is starting to shift in the speculative fiction scene. Since the publication of this anthology, Lisa Fuller won two Aurealis Awards (Australia's premier juried speculative fiction award) for her story "Don't Look!". On the international SFF scene, Darcie Little Badger is also becoming a familiar face on the Hugo shortlists.

And again, while the SFF awards scene has not exactly been welcoming, it's quite a different case with literary awards. The contributors to this anthology are a well-decorated bunch, who seem to have won just about every literary award Australia has and a few more besides. They're also a multi-talented mob, with many being known for other forms of writing or art, such as poetry, journalism, music and visual art. Generally speaking, they are not writers at the beginning of their careers. Rather, This All Come Back Now is an anthology that has been carefully curated to show their best, with most of the stories being reprints.

But show to whom? The Overture states that this is an anthology written by and for First Nations people, and certainly the editor didn't make it easy to access by starting with "Muyum, A Transgression" by poet Evelyn Araluen. The story is a surreal trip through time and space, but beautifully evocative. Although I didn't entirely understand what was going on, I enjoyed it enough that I'll be trying Araluen's recent poetry collection Dropbear, once it makes its way through the long queue at the library.

After this evocative but challenging start, the stories settle into something a bit more accessible for a white (or at least Australian) audience. There's a wide variety of stories on offer.

"Closing Time" by Samuel Wagan Watson is a Covid-era story that examines what this time of isolation means to a character who is already feeling isolated.

The anthology also contains a story by Wagan Watson's father, Sam Watson Snr. The Kadaitcha Sung was the first Aboriginal speculative fiction novel, published in 1990, and the anthology has included an extract of this seminal work.

Kalem Murray and Lisa Fuller write horror stories about teaching the new generation the importance of respecting traditions around how and where to travel; there are some places one should never tread.

Alison Whittaker looks at transhumanism from an Indigenous perspective, particularly how it might be used as another form of colonisation or segregation. This sits interestingly with Protocols of Transference by Kathryn Gledhill-Tucker, which looks at the combination of Indigenous worldview and technology through the protagonist’s relationship with the robot they’re building.

Climate concern shows up in more than a few of the stories, including Muyum, A Transgression; Lake Mindi by Krystal Hurst (whose Big Fire is something any Australian and many Americans will find all too easy to picture); Nimeybirra by Laniyuk (which I loved for the solidarity envisioned with the Maori of Aotearoa); Water by Ellen van Neerven; An Invitation by Timmah Ball.

I particularly enjoyed Snake of Light by Loki Liddle. It was intense and a bit violent (as many vigilante stories are), but the surreal aspects were managed well and there was a queer edge I enjoyed.

The extract from Alexis Wright's The Swan Book showed her superb command of language.

As is usual with anthologies, there were a few stories that didn't really do much for me, but none I actively disliked. It doesn't always make for comfortable reading, but nor should it. Rather, it should be appreciated as a ground-breaking work that has been sadly overdue. May it open the gateway for more.

Bonuses:  +2 for collecting together a representative sample of Indigenous speculative fiction, +1 for an excellent introduction placing the anthology in context.

Penalties: -1 for the challenging start to the collection.

Saunders, Mykaela. This All Come Back Now [University of Queensland Press, 2022]