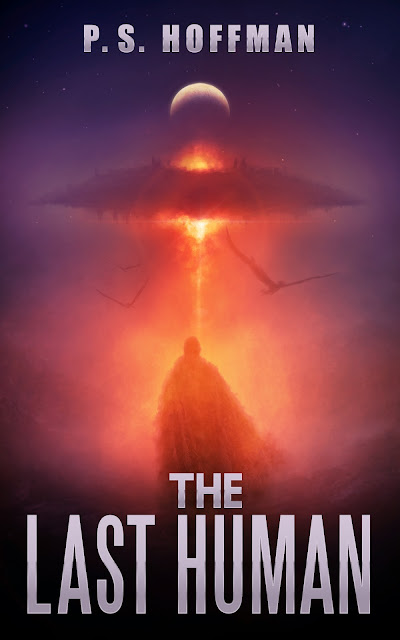 Untold millennia after human extinction, new intelligent species populate the universe. Civilizations have risen and fallen and risen again, and developed their own forms of industry, but the relics of the final stages of human technology are still regarded as the ultimate standard of quality. In most worlds, human artifacts are even preserved with sacred reverence. And although humanity is long gone, the memory of our glorious deeds has persisted and morphed and grown to such legendary heights that we are worshiped as gods.

On the planet Gaiam, the native birdlike population is divided in castes, in the same way their capital city, called the Cauldron because of its concave shape, is segregated in horizontal layers of ascending prestige. The nobility lives in the Highcity, the regular folk have the Midcity, and those who have been abandoned by society do their best to get by in the Lowtown. For nineteen years now, Gaiam has been under the cruel occupation of the Cyran Empire, a civilization of reptilians that have conquered dozens more worlds. A short-lived rebellion ended disastrously, and its survivors have joined the unfortunate inhabitants of the Lowtown.

But one day, corvid-shaped Eolh, a jaded spy-for-hire with no personal attachments and no hopes for the future, stumbles upon the greatest discovery in the universe: a gang boss has gotten his hands on a cryonic tank that contains an actual, intact, living human. And there's no telling what the imperial regime will do to seize possession of him. From that point on, Eolh's life becomes a whirlwind of back alley chases, deadly knife fights, underground tunnel forays, clandestine medicine, and personally difficult choices as he crosses paths with a devout robot who has been patiently working to bring about the return of the gods, an imperial magistrate who will happily burn down the city to advance his career ambitions, and a disgraced queen who willingly surrendered the planet to the invaders.

Each of these characters is a complete story in itself, with generous space dedicated to exploring the web of their desires and their hidden depths, but Poire, the rescued human, is on a whole other level of fascinating: his survivor guilt drives a hard journey towards maturity as he slowly gains the strength to resolve the incongruousness between his rather inconsequential position in the vanished human society and the cosmic-scale role that the new society wants to drop onto his shoulders.

One can perceive a similar tension at the core of Eolh's character: each of his choices is a heart-rending balancing act between his post-traumatic urge for self-preservation and his newfound and not entirely welcome sense of responsibility. This is one of the high achievements of this novel: the level of effort that the author invested in portraying the inner struggle behind choices that the reader might not approve of, but will definitely empathize with. These characters are carefully built of emotions that feel authentic, an artistic feat all the more remarkable by the fact that all but one of them behave by alien rules of psychology that in this kind of story often risk coming off as incomprehensible. Here, the alien traditions and assumptions about proper conduct and social norms are organically integrated into the plot so that they don't fall as an infodump, and the reader can easily follow the reasons why this society works the way it does. Poire the human is utterly lost in this world, but the reader never is.

The world itself, lovingly put together, is worthy of more extensive praise. Although the action is mostly limited to one city, the author has taken obvious delight in the creation of each setting, from the shiny towers of the occupation government to the grimy passages between neglected and barely lit neighborhoods. The quarrel between factions to see who will gain control of the last human takes the reader through all the levels of the Cauldron, giving the author a nice excuse to display a vigorous worldbuilding arsenal. It's hard enough to design an entire collective habitat for a species of flight-capable aliens; it's even harder to refine the precise sense of setting that allows the author to carry the action naturally through the places where it needs to happen while ensuring that the physical components of each space reinforce the mood of each scene. This novel invites the reader to feel the vertigo of polished stone balconies and the dread of foul-smelling sewers and the eeriness of sentient climbing vines and the disorientation of abandoned high-tech ruins. Each space is strange and unexpected, but not simply for the sake of wowing the reader (though it more than does). I'm repeating myself, but it's important to highlight the synergy this novel reaches, by which the space supports the action and the action colors the space.

There are unmistakable parallels between the emergence of a long-awaited god in Cyran-occupied Gaiam and the emergence of Christianity in Roman-occupied Judea, but this novel does something far more interesting than a straight retelling of the Gospels. Poire is well aware that he's no savior, he's no divine superman, and he's the least-equipped hero to face the full might of an empire. But it's intensely satisfying to witness his growth from an unskilled, mediocre youth into a reliable, confident man who may not like the circumstances he's been thrown into, but serenely accepts the duty those circumstances put in his hands.

For a debut novel, and a self-published one at that, The Last Human is a consistent work of writing excellence that deserves a place next to any professionally produced book. You can immediately tell how much fun the author had in coming up with the complexities of these characters and in assembling every weird detail of the difficult world they inhabit. Fortunately, it's only the first entry in a planned series, which means we'll get to savor the mysteries of Gaiam for several years to come.

Bonuses: +2 for the construction of richly detailed spaces throughout the city, +2 for gut-punching feats of psychological depth.

Penalties: −2 for the way the sequel hook makes the ending feel truncated, −2 because the language used to describe the ethnic varieties of avians comes too close to validating monarchism and bioessentialism—there's no justification for saying there's anything inherently "regal" about birds of prey that would make them worthier rulers than crows, for instance.