Ever wanted a Pokémon game to switch it up? Well, here it is! 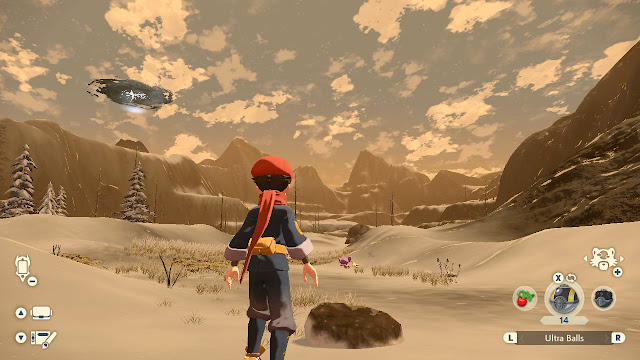 Introduced as a youth to the Pokémon franchise, there used to always be a special feeling when I’d start up a game and hear the cheery, yet empowering soundtrack play. After playing one game, I knew what was in store; choose your starter, fight your rival, go on an adventure, fight Team whatever their name is, and beat the Elite Four. Eventually, this formula became stale, and though Pokémon games sell themselves without the need for change, core players found themselves not completing some of the games. Over time Game Freak and Nintendo tried to switch things up, but nothing ever created a substantial shift, that is, until now (I hope). Pokémon Legends: Arceus injects some brand new mechanics into the franchise. Though it's only a spinoff, I hope that some of these things will be carried over to the mainline entries. 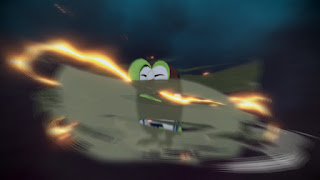 The most exciting addition to Legends has to be the new capture system. Players can now attempt to capture Pokémon without the aid of their fellow ‘mons in battle. Instead, as the player character, you can directly throw a ball at a wild Pokémon for an attempted catch. Three different types of balls have varying effects: standard Poké/great/ultra balls, feather/wing/jet balls (good for catching flying and fast-moving Pokémon), and heavy/leaden/gigaton balls (extremely effective if you hit an unsuspecting Pokémon from behind). This type of capture system removes the tedium of having to weaken Pokémon in battle every single time. Do you hide in the grass and throw a feather ball from far away and watch it fly across the map? Do you get up close and try for a backstab capture with a heavy ball, knowing the Pokémon can turn around at any second? The game emits a satisfying sound whenever you hit a Pokémon from behind. Or you could always do what I did and hit every Bidoof in the face with an ultra ball. Works every time. 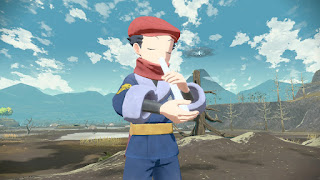 In addition to a revamped capture system, Legends adds a more exciting Pokédex. Considering this game takes place a long time ago, the inhabitants have yet to truly understand Pokémon. Most people are afraid of them (yes, even the lowly Bidoof is feared by all). The game takes place in the Sinnoh region during early settlement, back when it went by the name of Hisui. The diamond and pearl clans are at each other’s throats and Team Galaxy is trying to research Pokémon to ensure that Hisui’s inhabitants have a better understanding of the world around them. Luckily for everyone, the player character drops from a rift in the sky to help out. This is where the new (old?) Pokédex comes in. It’s up to the player to research and help fill out the dex. Every Pokémon requires a different set of tasks to fully research. For instance, some dex objectives will have the player catch a certain amount of a specific Pokémon, some will have them see that ‘mon defeated multiple times, some will want to see them use a certain move, etc. 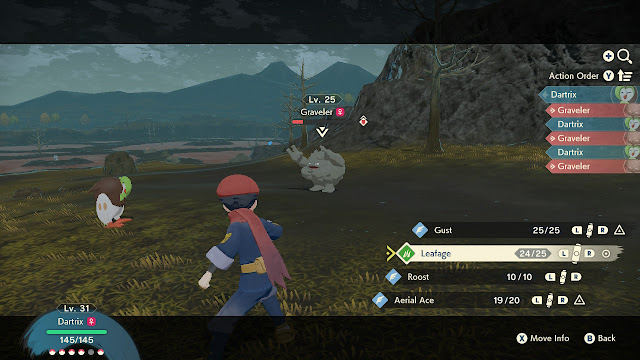 I spent my first few hours in Legends being a good little Pokémon trainer, catching everything I could find, filling out the Pokédex objectives, and exploring everywhere I could. The initial hours of the game are enticing, especially for an old-school fan of the series. Using the player character to navigate Pokémon battles and having to avoid their attacks was a fun new mechanic. I enjoyed feeling like not only were my Pokémon battling, but I was too. And it makes sense. Not all wild monsters are going to ignore you until you throw out another ‘mon, the more aggressive ones would probably attack you too, and the skittish would run away. Due to different Pokémon natures, some will ignore you, some will watch and wait for you to make a move, some will run, and some will attack on sight. For the record, in absolute Bidoof fashion, Bidoof will ignore you, even when you're directly in front of his face. Depending on how many new Pokémon are captured and how many Pokédex objectives have been fulfilled on your return from the field, you receive currency and experience toward your Team Galaxy rank. Your rank within Team Galaxy determines your ability to train Pokémon to a certain level, akin to badges in the traditional games, so it’s a good idea to get to level seven so you can get your ‘mons to level one hundred. That is if you make it that far. 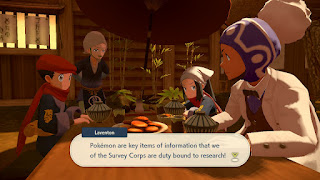 Unfortunately, I found that the luster of the new mechanics began to fade after about fifteen hours (out of twenty-five I put in). The quest design is rather uninspiring, with many side missions being simple fetch quests. The main quest is pretty straightforward but eventually becomes rather silly. The diamond and pearl clans who were once at war now seem more like immature siblings. The writing in Pokémon games can be and has been (looking at you Black and White), better. Unfortunately, this title is one of the weaker entries in that regard.

What’s worse, the reward for maxing out a Pokemon’s research in the Pokédex is… wait for it… nothing! That’s right. Of those objectives I mentioned earlier, you only need to achieve ten points worth of research to consider the ‘dex entry filled. In some cases, Pokémon can have over thirty objective squares to achieve. The more diligent player isn't rewarded for the effort. It’s nice that Game Freak catered to the more casual player, but they left the hardcore players in the dust in the process. The worst offender in Legends is the bland, uninspired world. The game initially felt like such a departure from the standard Pokémon game that I was blinded to how underdeveloped the playable areas were. They hit all the basic biomes with a beach area, grasslands, tundra, a volcano, etc., but it never feels like more than a bland map with variety implemented for the sake of variety. 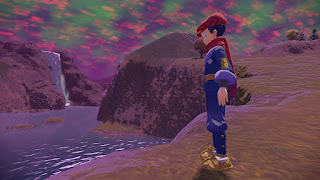 One of the best additions includes alternate versions of some Pokémon and their evolutions. Scyther gets a cool evolution in the form of Kleavor (bug/rock type) while Growlithe and Arcanine take on a different look and become fire/rock types. Instead of offering a new set of three starters, Legends gives the players a choice between Oshawott, Rowlet, and Cyndaquil. Each of these Pokémon are well known, but to spice it up, each one has a new final evolution. Typhlosion becomes Fire/Ghost, Decidueye becomes grass/fighting, and Samurott becomes a water/dark type. These alternate evolution/versions of the Pokémon were a much welcome addition, with some being silly and others quite well designed. 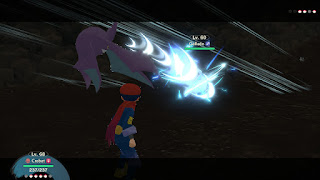 For players looking to add more challenges to the game, Game Freak implemented alpha Pokémon. You can find these ‘mons in the wild and they put up quite a fight. They are much bigger and stronger than the average Pokémon of its species and re-spawn less frequently, so you have to balance your offense and defense when approaching one if you want to catch them. I thought this was a great addition to a not very challenging game. That is unless we’re talking about the final trainer battle in the main story.

The final human trainer boss battle is a doozy. Completely unbalanced with the rest of the game, and to be honest, quite frustrating considering how the game never offers up much of a challenge in the way of trainer v trainer battles. The inclusion of fast and strong moves adds an extra layer to the turn-based combat (with fast moves letting you attack quicker and with less damage, and strong moves doing the opposite), though I never needed to pay much attention to it until the final battle. I wish the mechanic had been necessary throughout the campaign. 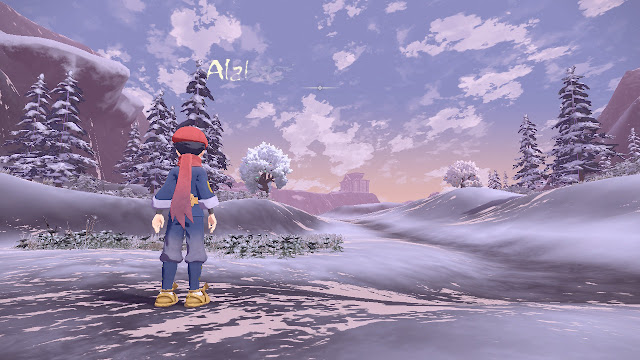 Though Pokémon Legends: Arceus misses the mark on a few important things, it’s never a bad game. It’s an enjoyable experience that becomes a bit easier to put down over time. When I first started the game, I picked it up every night for a few hours. Eventually, I would pick it up every few weeks to make sure I finished it, but once I started playing again, I would appreciate the simple joy of collecting all the little critters around the map. It’s just too bad the innovative ideas aren't supported by the story, characters, and world this entry deserves. That being said, if your favorite aspect of any Pokémon is catching, then this one is absolutely for you. And though there isn’t a huge reward for maxing out your research, there is one for catching them all. The Pokémon god Arceus awaits. Boot up your Switch and start collecting!
The Math
Objective Assessment: 7/10
Bonus: +1 for new and enjoyable capture/battle mechanics. +1 for the addition of alpha Pokémon. +1 for the new alternate Pokémon designs.
Penalties: -1 for poor character/story writing. -1 for a bland and ugly world. -1 lack of satisfying research rewards for more hardcore players.
Nerd Coefficient: 7/10
Posted by: Joe DelFranco - Fiction writer and lover of most things video games. On most days you can find him writing at his favorite spot in the little state of Rhode Island.
Posted by Joedelfranco at 12:00:00 AM