Microreview: Drunk on All Your Strange New Words by Eddie Robson 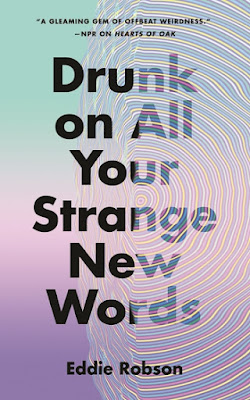 In the near future, Earth has established diplomatic relations with aliens known as Logi, sort-of-but-not-quite humanoids who cannot speak in sound and use telepathy instead. To facilitate the daily business of politics, some humans are trained in specialized schools to understand Logi telepathy and translate into human speech. Each Logi visitor is thus paired with a human interpreter who accompanies them at their official appearances and handles their routine communication with Earth governments.

The catch? The Logi language does funny things to the human brain. After a few minutes of hosting alien thoughts in your head, you start feeling drunk. Too much talking in one day, and you might pass out.

So when our protagonist Lydia, the interpreter assigned to the Logi cultural attaché, wakes up from a massive blackout to find her boss murdered on his sofa, she has to quickly decide whom to trust and whom to suspect, because this is a future where impressions are everything, and the wording of a message can have rippling effects on public opinion.

Lydia's quest to solve the murder of her boss requires her to do her own investigation before the police catches up with her, evade an omnipresent surveillance state, learn to compartmentalize multiple telepathic conversations inside her head, and follow a trail of breadcrumbs made of contradictory versions and manufactured narratives. In the world of interplanetary diplomacy, truth is what you make it sound like. On top of that, add algorithmic "truthiness" rankings and a hypertrophied fake news culture, and what you get is a world of illusions, a society built on stories because people's relationship with reality has become impassably mediated by technological filters.

The permanently logged-in characters of this novel have taken to the casual habit of always double-checking each other's statements with private web searches and face recognition and ID tracing and live recordings and curated newsfeeds. Truth is fluid, and trust is conditional. Lydia understands this better than anyone, given that her job is about transforming the presentation of an idea from one medium to another.

Using a translator as a protagonist provides a brilliant opportunity for the novel to satirize internet culture trends. Conspiracy theorists propagate lies that may or may not be grounded on fact, most notably the suspicion that the Logi are altering the official versions of human cultural productions. A mood of collective uncertainty is giving way to mass paranoia because there is never a definitive picture of events, only hyperbolic and partial accounts that confuse more than they inform, and the only people with direct access to the mind of their interlocutors get literally intoxicated by the contact. For most trained interpreters, the experience is an inevitable downside of the job, and they get used to dealing with it. But for some, the high can be addictive.

Drunk on All Your Strange New Words doesn't have galaxy-threatening stakes. It doesn't need to. It's a sharp dissection of the ways online life builds channels that connect us at the same time that they distance us. It's a clever murder mystery with grim revelations. It's an alien contact story that rejects the fear of the other. And it's the rare adventure thriller set mostly inside the mind. It is a truly intoxicating read that may inspire you to build a closer friendship with your inner monologue. You don't have to believe me. Believe the voice in your head that is reading these words.

Bonuses: +1 for the seamless integration of wearable technology into the characters' daily lives.