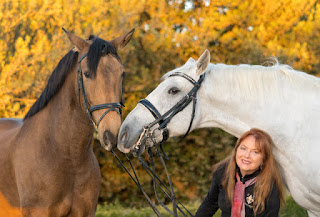 Melinda M. Snodgrass studied opera at the Conservatory of Vienna, graduated from U.N.M. with a degree in history, and went on to Law School. After 3 years as a lawyer she realized she hated lawyers and turned to writing.

In 1988 she accepted a job on Star Trek: The Next Generation and began her Hollywood career where she has worked on staff on numerous shows and has written television pilots and feature films. Most recently working as an executive producer on Wild Cards for Universal Pictures.

In the prose world she writes for and co-edits the shared world anthology series Wild Cards with George R. R. Martin. She has completed the fifth book in her five book Space Opera series Imperials and is working on a fourth novel in the Carolingian series. All of her books are being released on-line and in print-on-demand. Presently available -- This Case is Gonna Kill Me, The High Ground. In Evil Times and The Hidden World.

For fun she rides her dressage horses, plays video games and spends a lot of time in the gym. (Or she did before there was a pandemic).

Today she tells us about her 6 Books:

Unconquerable Sun by Kate Elliott. I love Kate’s books.
2. What upcoming book are you really excited about?

The final volume of the Expanse series from James S.A. Corey, Leviathan Falls.

I think Emma Newman’s wonderful Split Worlds series. And right now in these lonely Covid times I rather want to read some Georgette Heyer. Like Have Spacesuit Will Travel by Heinlein, they are comfort reading for me.

4. How about a book you’ve changed your mind about – either positively or negatively?
That doesn’t happen to often, because if I find a book does not engage me I don’t generally finish reading it.
5. What’s one book, which you read as a child or a young adult, that has had a lasting influence on your writing?

That’s a tricky question. I loved the Lord of the Rings trilogy, but I suck at description, don’t enjoy writing it at all. A Princess of Mars was the first science fiction book I ever read when I was 7, but he wasn’t a great writer. Oddly, I think it was The Wind in the Willows. Particularly the chapter called The Piper at the Gates of Dawn. Every time I read it I get a lump in my throat.

My latest book is probably the upcoming book 4, The Currency of War, in my space opera the Imperials Saga. It will be available in February, and I’m really proud of that book. Actually I’m really proud of the entire series. It’s space opera, but with more focus on issues of politics, economics and second class status than it is about big space battles. There are a few of those, but they are of less interest to me then how societies in crises succeed or fail.
POSTED BY: Paul Weimer. Ubiquitous in Shadow, but I’m just this guy, you know? @princejvstin.
Posted by Paul Weimer at 12:00:00 AM