The voice of Eru Ilúvatar: The Silmarillion in Audio

Given the upcoming Amazon Prime series set in the Second Age of Tolkien’s Legendarium, and new books and works coming out about Tolkien and his work, I decided a revisit of the Silmarillion was in order...but I decided not to re-read it. But to listen to it in audio. 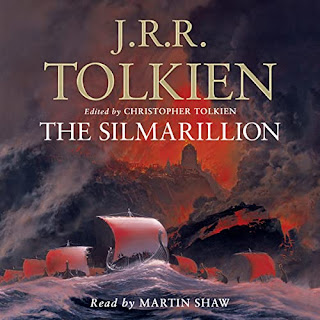 The Silmarillion scant needs an introduction to most readers in terms of a name. The “forerunner”, the “predecessor”, the “antecedent”, the “bible” of The Hobbit and The Lord of the Rings, it is portions of what Christopher Tolkien would compile to become The Silmarillion is what Tolkien first put words to paper in writing about Middle Earth. It also is legendarily intimidating to readers who may have watched the movies, read the Lord of the Rings and the Hobbit, and taken one look at The Silmarillion and went “Oh,boy.”


And to be frank and honest, the book is intimidating as all out, especially for readers whose entire exposure to epic fantasy might just BE the LOTR. I mean, readers who haven’t tried to tackle the absolute unit that are Kate Elliott books, for example, or the expanse of works of Robin Hobb, or Michelle Sagara, or Janny Wurts or the like might look at The Silmarillion and go “bwah?” Heck, those are just big, thick novels. The Silmarillion doesn’t even look or feel or read like a novel anyway.


From the start of the first portion of the book, the Ainulindalë:
There was Eru, the One, who in Arda is called Ilúvatar; and he made first the Ainur, the Holy Ones, that were the offspring of his thought, and they were with him before aught else was made. And he spoke to them, propounding to them themes of music; and they sang before him, and he was glad. But for a long while they sang only each alone, or but few together, while the rest hearkened; for each comprehended only that part of the mind of Ilúvatar from which he came, and in the understanding of their brethren they grew but slowly. Yet ever as they listened they came to deeper understanding, and increased in unison and harmony.

Poetry? Mythology? Deep History? All of the above? We’re not in Kansas anymore. We’re not even in Minas Tirith or the Shire. Lots of people who will re-read the LOTR and the Hobbit, watch the movies every year, stay far far away from this. How many people buy and read poetry, for example, much less speculative fiction poetry?

Back when, after I read The Lord of the Rings and The Hobbit, I tried to read The Silmarillion. I was still in my early teens and frankly, reader, I didn’t know what I was in for, and I bounced off of it and did not try it again for a decade. It took the second effort for me to understand the power and beauty that was to be found within, but even then, it was not the easiest of reads. Portions of it are like the Appendices to the Lord of the Rings, other parts myth and legend, other parts resembling the outline of a tale that could be told in many more pages (and in some cases, subsequently has)


But, friends, I am here to rescue you from those fears and difficulties and to get you into this Silmarillion, today. I am here to provide you a way to experience and absorb the book and get a feel for Tolkien’s earliest parts of his Legendarium, and that would be the audio edition, narrated by Martin Shaw.

While there have been many re-recordings of various other Tolkien works, there is but one version of The Silmarillion in audio, and that is the very proper British enunciation of Tolkien’s work that you will hear. Listen, feel the words of Tolkien in your ears as he brings the various portions of the book known as The Silmarillion to life. You may only vaguely know who Ilúvatar is, know Beren and Luthien only from their mention in the Lord of the Rings, and Gondolin is just a name for the place where Orcrist, Glamdring and Sting were made from The Hobbit, but through the voice of Martin Shaw, you can learn and experience so much more.

It occurs to me that readers of this may not be familiar with what the book actually has to offer.

The book begins with a creation myth, the Music of the Ainur, the Ainulindale. This tells the story of the making of the world of Middle Earth. In the beginning was not, as in the Christian tradition, the Word, but rather the Song. The world is Sung into existence by Eru Ilúvatar and the Ainur whom he created, including, of course, Melkor, later known as Morgoth, who would become the patron and master of Sauron.

Next up is The Valaquenta. This is where having an audiobook is really valuable, as it is a relatively dry list of the Ainur: The Greater Valar (and some of the lesser Maiar), who they are and what they do. It is not scintillating reading straight up for me, but under Shaw’s narration, it sounds much grander and epic. It kind of reminded me this time of the Catalog of Ships from The Iliad, and I suspect that Professor Tolkien used that as a model.

After this, we reach the heart of the book, the so called Quenta Silmarillion. This is the story of the Silmarils, the jewels that hold the light of the two trees of Valinor, and much of the early days of Middle Earth in leading up to their creation, their theft, and the terrible oath sworn by their creator, Feanor, in trying to get them back, and the tragedy of Elves and Men subsequently. This section contains the bulk of the stories of the elder days, ranging from the wars against Morgoth, the story of Beren and Luthien, and the fall of Gondolin. One could call it The Rise and Fall of the Noldor. One can see just how, in the time of the Lord of the Rings, the Elves are a shadow of their former self, even in the centers of their power. One can also see how these stories, here are often just recitations less than really polished full on narratives that we think of. Again, this is more like the recitation of myths and legends more than straight up story. For the most part, though, these myths and legends are of loss, diminishment, and tragedy. There are moments of great beauty, and heroism, and light, but the theme is definitely of how the Elves, rising to greatness, fall. Or how the world that Iluvatar and the Valar sang came to be not what that original glorious song might have presaged.

I had forgotten precisely what the "Dark days" were that get referenced in the Lord of the Rings books, and why Elves and Dwarves get along so very badly. I had that story refreshed here, as well, a story of greed, and tragedy remembered for ages of the world. This makes and enriches the Lord of the Rings and the friendship of Legolas and Gimli all the more remarkable for overcoming such hatred.

The Akallabêth is a much more compact section talking about the Rise and fall of Numenor, the great kingdom of Men on an island west of what we think of Middle-Earth, and how pride and arrogance and weaknesses proved Men’s downfall, when they listened to Sauron, who had come to them in a fair form, and challenged the Valar themselves. It is a distinctly tragic tale, in a book that is full of tragedy as seen above. I noticed this time, in listening to the narration, that Tolkien distinctly and very deliberately invokes world cognate on Avalon (as in the Arthuriana) and Atlantis in describing and naming the Numenorean realm. This keeps with the flirtation that Tolkien has throughout his work of whether the early history and myth of Middle-Earth is, in fact, the early history and myth of our own world. Or is it just a nearby world, in a multiverse sense?¹

Of the Rings of Power and the Third Age, the last section of the book, isn’t quite what it says, since it recapitulates, first, some of the Second Age as described in the previous Akallabêth. Otherwise, it does focus on Sauron’s rise, the Rings of Power and everything that leads up to the Hobbit and the Lord of the Rings. It refreshed some things that got changed in the movie, like for example how Isildur’s failure to destroy the ring after the battle of the Last Alliance (the opening to the Fellowship of the Ring movie) isn’t quite as bad as it was. In the text, Isildur was actually going to Rivendell to try and figure out what to do with the ring.

Back in the day, this was all that was beyond the four books. By the late 80’s and early 90’s the wealth of Tolkien work really started going with The Book of Lost Tales and the rest of The History of Middle-earth, The Atlas of Middle EArth and the flood of Tolkien works, and the limitlessness and diversity of forms and styles of Tolkien work really took off. While some of this has been very much a rabbit hole of arcana, others (such as The Children of Hurin) are more traditional narratives that are far more accessible. Portions of the story outlined above have been published in The Children of Hurin, Beren and Luthien, and more. (To say nothing of the forthcoming Amazon series and other visual works in development if not production)

So with the wealth of material these days, is The Silmarillion worth it? Yes. This is the first fruit of the labor of working through Professor Tolkien’s work, and while it is very much myth and legend, and poetry, and not at all the standard of storytelling you expect out of fantasy fiction, there is an undeniable power to it, especially in vocal form. I found, for myself, the Silmarillion was like a book of poetry, not something to blast through on a long drive, or a couple of days at work, but something to sip, to sup, to hear a portion of the poetry of Tolkien’s foundational stories and myths for Middle Earth, was fantastic for me. I think, in those sups and sips, that someone intimidated by The Silmarillion can let the power of the myths and legends in it come over them, and be immersed in the foundational seas of Middle Earth.

¹ While the multiverse is recently a hot and new idea, this one is not. The old D&D Roleplaying Setting of Harn postulates a family of alternate worlds connected to each other, the titular Harn being in the center of a cluster of such worlds. One of the other worlds is our own, Earth.  Another of the worlds is called Midgaad, and is where the Elves and Dwarves of the Harn setting originally come from. It is speculated in the Harn sourcebooks, in the world of Harn, that Midgaad is in fact, what we know as Middle-Earth, and that Tolkien either visited there himself or talked to someone from there.