Jack Vance’s The Killing Machine is the second in his (audio reissue) of the Demon Princes series. 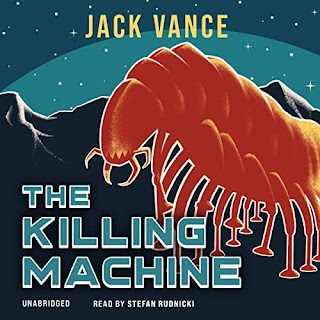 In The Star King we were introduced to interstellar hero Kirth Gersen. Kirth’s path, his mission in life was defined and set by the raid on his home colony settlement of Mt. Pleasant by five master criminals the titular Demon Princes. In The Star King, Kirth dealt with the first of the five that crossed his path, Malagate the Woe.  In this second novel, The Killing Machine, Kirth turns his attentions to the next Demon Prince on his list, Kokor Hekkus

Something I didn’t appreciate when I first read (and re-read) these novels previously but is now clear to me know is the role of serendipitous luck in how these novels kick off. It is luck and chance in both volumes that puts Gersen in the path of this latest foe, quite by chance and accident, and he spends the rest of the novel trying to force a decisive confrontation with the Demon Prince. Also in both novels, there is a sense of “I want you to know it was me”  Olenna Tyrell: sort of feel to Gersen’s revenge. Shooting the Demon Prince out of the sky is not quite satisfactory enough for Gersen  The Prince must face his avenger.

So a lot of the lines of The Star King will feel resonant, and familiar, although Gersen’s ultimate tack and methods turn out to be different.. The Star King is a “Who is Malagate?” sort of story, where Gersen narrows down a list of suspects and runs down a series of deductions to come up with who his target is, and deal with him, Here, in The Killing Machine, the identity of Kokor Hekkus is less obscure, although like The Star King, he works through intermediaries and secondary antagonists.  While in the first novel, Gersen accidentally fell into a piece of information that Malagate desperately wanted, in this novel, Gersen is far more deliberate and proactive, working to take possession of a company that was building a war machine for Hekkus until a falling out caused difficulties, and uses that as the hook to try and get at the Demon Prince.

One last thing I do like to note is that while both Malagate and Hekkus are "Demon Princes", and Gersen does go after them equally, they as antagonists are distinctly different. Both are larger than life, Romantic in the opera sense, melodramatic in the Vancian mode, but they are not cookie cutter clones of each other in the slightest.

And then there is the planet Thamber. While the first novel has the garden planet Teehalt’s World as a hook, this novel has the planet Thamber. Hekkus is all too familiar with Thamber but unlike the first novel, it is inhabited by a demi-medieval sort of feudal society of small warring polities of various kinds. When our hero finally finds the way there (with the help of the Girl of the Week, Iphigenia (and isn’t there a nicely mythic and resonant name?)) he finds himself in the middle of a slew of conflicts and situations that Hokkus is long immersed in. Thamber sort of reminds me of a Leigh Brackettish Mars, or any other science fantasy world where there is technology, but also pre-modern social structures and systems.

Thamber is full of the weird mashup of science fiction and fantasy that Vance likes to use, before and since. Castles and fortified posts, wandering bands, strange creatures and monsters, high technology and low mixed together.  It is clear to me, now, that the Planet of Adventure novels, starting four years after the publication of The Killing Machine, now is a bit of Vance really wanting to mine a planet full of weird polities in a technofeudal and mixture of cultures sort of planet, with the added provisos of aliens. There is a subplot in the Thamber section of the novel where Kirth is separated involuntarily from his ship temporarily. Planet of Adventure takes that as the skeleton of the entire novel, throwing the hero Adam Reith and making it his entire quest to find a way off of a technofeudal planet.

The other innovation to the Oikoumene verse of Vance that we see in this novel, and we touch on this planet in a couple of set pieces is the planet of Interchange. How do bounty hunters, thieves, brigands, kidnappers, slavers and the like plausibly work in this space opera verse? Enter the planet of Interchange, happy to host hostages/kidnap victims who can be redeemed with just a small fee going to Interchange. The victims in the meantime can get a varying level of comforts from the spartan to the luxurious. It makes a rational business out of kidnapping, and, 50 years on after the novel was made, is a bit of a critique at late stage capitalism that Vance probably did not intend explicitly, but it sure reads like one in 2022, especially given Gersen’s very vocal opinions about the practice. Aside from that, its a wonderful and considered piece of storytelling and worldbuilding.

The strengths and weaknesses of the first book, as detailed in the earlier review, apply here. Vance is great at weird societies, but they are all heteronormative. It may not be fair for me to criticize Vance thusly, but LeGuin was already getting published at this point. Iphigenia, as the “Bond Girl” has more agency than Pallas does in the first book, but even with the setup of her agency, in the end she is far too passive for the novel’s own good.  On the other hand, the audio rendition from Stefan Rudnicki is, again, excellent, and a great way to experience Jack Vance’s work. The novel is short, lean and punchy.

The Demon Princes novels are necessarily episodic, and while there are references to Gersen’s struggle against Malagate, and his past history,  they are minimal and this story stands on its own. This was written in an age before series were a thing, and so the interconnective material between the first two novels is minimal at best. You could, if you wanted, pick up the Demon Princes series right here and start with Gersen tackling the gadget obsessed and murderous Kokor Hekkus. If you are less interested in a whodunit and more in a howtogetem, this is the better Demon Princes novel for you.

Penalties: -2 Some of the social aspects of the novel, especially in regards to female and non heteronormative characters, have not aged quite as well.