Jo Graham’s Warlady, second in her Calpurnian Wars series, deftly moves the action to the planet of Morrigan, where politics, intrigue and ancient secrets threaten not only the future of Sandrine, bodyguard to the titular Warlady, but the fate of the entire planet as well. 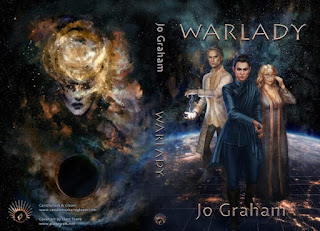 [Jo Graham’s Warlady deftly moves the action in her series to the planet of Morrigan,  where politics, intrigue, the threat of war, and ancient secrets threaten not only the future of Satyrine, bodyguard to the titular Warlady, but the fate of the entire planet as well. Graham expertly weaves the personal with the political, making the fate and stakes of Satyrine’s old relationship with the electromancer Jauffre as important and grounded for the reader as the fate of their entire world.]

The avaricious and expansionist Calpurnians, last seen in Jo Graham’s Sounding Dark, are a looming threat to another of their interstellar neighbors. This time it is the small planet of Morrigan. Like the republic of Eresh, Morrigan has an ace up its sleeve, if it can only turn it to bear--the artificial intelligence based upon,, or perhaps it is the holy spirit of a long ago hero of Morrigan. That entity has guided the war leaders of Morrigan, and such advice would be invaluable for an upcoming conflict.

But when the titular Warlady dies, almost certainly assassinated, the political convulsions and the gap in leadership may yet leave Morrigan dangerously open to the predations of the rapacious Calpurnians. Can Sandrine, bodyguard to the dead Warlady,  help keep her planet free? And what will the costs be? This is the story of Jo Graham’s Warlady, second in her Calpurnian Wars series.

If Sounding Dark, first in the series, relied heavily on Sumerian motifs and legends to weave its story of a mysterious ancient ship as the possible salvation of the planet Eresh, Warlady goes for a different motif entirely. With a planet named Morrigan, and a leader of the people called a Warlord (or in this cycle, a Warlady), I was expecting something more along the lines of Celtic mythology in comparison to the Sumerian. My expectations were not met, as Graham goes in a couple of different directions instead.

First off, let’s talk about the Electromancers and Dreamers, especially since Jauffre, the former lover of Sandrine, is one of the three main characters of the piece and is an Electronmancer. Just as Sounding Dark blended notes of fantasy and myth into the space opera, the Electronmancers and Dreamers add a science fantasy component to the space opera by positing people who have the bloodlines and abilities to manifest electricity, or to walk and manipulate dreams. Morrigan, though, especially distrusts the power of Electronmancers, and what they can do.

In a real sense, seeing the past, present and the potential future of the Electronmancers through Jaffure’s story,  the property that comes to mind is Dragon Age, and in particular the second game in the series, Dragon Age II. In that game, the bounds and strictures on Mages, while we saw it in the first game, really come to a head and to violent revolt. Mages are a dangerous force, unpredictable, controlled for their own good and the good of society, but valuable resources all the same. The Electronmancers in this book fit a very similar niche, and have similar desires for freedom and autonomy.

Graham goes for the personal, though. Rather than having a wide ranging revolt and revolution in the midst of what else is going on, Jauffre’s desires for a better life for those of his blood come through in the former lovers reunited strand of the novel with Sandrine. We get the sense right away that the two have a past, but it takes a bit to tell the entire story of how they originally met and just what that entailed, because it does nicely set up the two working together again when the Calpurnians come knocking.

As far as the Dreamers, the other “magic users”, we get a lot less detail and less development. True, the third of our main characters, Leonie, is one, and is also Hierophant, and a possible successor to the Warlady, but her story, her development and her strand of the story frankly felt a little shallow than the attention that Graham lavishes so luxuriously on Sandrine and Jauffre. It is a pity, because Graham plays with the role of the Hierophant and also the election of the Warlady in terms that reminded me a bit of the College of Cardinals and the election of a Pope. There is a lot of potential here, and we do get to see Leonie try and dance on a knife’s edge as she realizes the implications of who might be elected the next Warlady and what that means, but it does feel a little underdone compared to the mainline of the plot. But Leonie’s dreaming power is definitely less engaged with than the electromancers and I would have liked to have learned more. Too, Leonie’s behind the scenes actions, which don’t quite make the page or get attention as much as Sandrine and Jauffre’s actions, turn out to be crucial to solving the original problem, but it feels more than a bit off camera.

In the end, Leonie is a bit of a third wheel to SAndrine and Jauffre but now let us focus on Sandrine. Given the flashback we get from when she meets Jauffre, Sandrine is an ambitious and determined young woman who grows into the right arm, the aide and bodyguard, to the titular Warlady.  She makes a strong two-handed team with Jauffre both in the past and in the present, and the strength and depth of their former relationship, coming back up again, complete with a deliberate use of tropes, shows how much Graham knows what she is playing with here, and is being deliberately playful in their story.  In the end I found myself reading for their book for their relationship as much as the main plot of who was to be the next Warlady, who assassinated the prior one, and what the perfidious Calpurnians were up to.

Unlike the previous novel and Eresh and its space station, Graham spreads her wings a little bit with Morrigan as a setting. This was previewed in the world guide at the end of Sounding Dark, that Morrigan is a tidally locked planet. The light side is too hot for life, so the terminator line and the dark side are where Morriganians live. I am not sure that planetary geophysics would make the dark side in the end any more viable as a place to live on a tidally locked planet than the light side (see Charlie Jane Anders’ The City in the Middle of the Night for a different treatment of a tidally locked planet). The impression that Graham gives is as the Morrigans as a relatively small colony (especially compared to the vast Calpurnians) using technology as best they can on a marginal world.

This gets to the last bit of the book I want to discuss and that is Khreesos the deified eidolon who might be divine, an AI, a memory of the last leader, or all of the above. He was an early Warlord who helped ensure Morrigan independence against an early Calpurnian attempt at conquest, that much everyone agrees on. But what he is beyond that, what the Presence inside of the ancient machinery the Warlord (or Warlady) connects to, is a matter that is not clear--and the richly different interpretations of who and what he is to the people of Morrigan show a nuanced understanding that a people, a culture, can have very different views on what is ostensibly the same founding myth or belief. Even as the answer to that question matters for the plot, Graham is careful with the revelations to leave room for the numinous, for doubt, for belief.   This is Graham at her best, I think, exploring the numinous, the divine, the metaphysical within a future technological world, and finding room for both there.

Overall, Warlady shows the strengths of the author’s writing, and continues to build and deepen the Calpurnian Wars universe. Graham has a vision for where this is going, as the appendix to this novel is a Morriganian guide to Menaechmi, which is the setting of the projected next book in the series. The culture shifts and differences among the worlds are clear and wide and I look forward to seeing more of Graham’s verse.

Bonuses: +1 for a rich exploration of faith, belief and deep culture in Spaaaace.

Penalties: -1 Other aspects of the plot and character building to the top two seem a little sketched in and not as fully fleshed out.