A cyclical epic about the connections and divisions between us 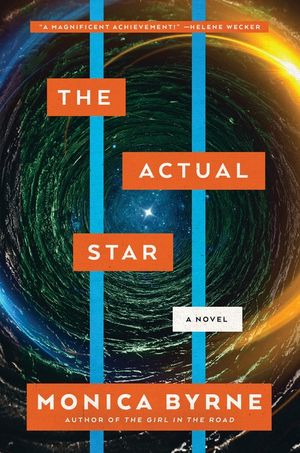 The Actual Star is a demanding book. It tells three interdependent stories, each a novel in its own right, separated by centuries but connected by reincarnation and by the eternal recurrence of myths. It opens with three maps of the same location, each set in a different era, oriented in a different direction, and containing different landmarks that reflect the passage of colonial devastation and sea level rise. It has a massive glossary at the end, which I recommend you read first, because it explains much of the backstory that the text of the novel proper is content to leave implied. It has entire pages of untranslated dialogues in Spanish, futuristic neo-Spanish, and Belizean Kriol. And at every step it asks you to reevaluate your assumptions about how societies work, how cultures survive, and how people seek their own way of transcendence.

In the year 1012, Ixul and Ajul are the twin heirs of the Tzoyna throne in one of the many Mesoamerican kingdoms that comprise what we call the Maya civilization. Their younger sister Ket starts having prophetic visions that they hope will guide their people to renewed prosperity, but their ascent to the throne coincides with a period of climate change that destabilizes the necessary trust between farmers and rulers.

In the year 2012, American teenager Leah Oliveri flies from her boring frozen town in Minnesota to Belize, the home of her biological father, following an irresistible yet indescribable pull toward a deeper meaning. Right at the time the Maya calendar is turning over a leaf, she becomes the lover of two tourist guides and develops a dangerous fascination with a sacred cave which she believes guards the answers she's looking for.

In the year 3012, after modern civilization has collapsed and humanity has narrowly survived extinction, the dominant social structure is the religion of Laviaja (futuristic neo-Spanish for "The Journey"), a syncretic blend of anarcho-nomadism, Maya myth, and radical sex positivity that reveres Leah Oliveri as a saint and her two one-night-stands as her first apostles. This belief system has kept peace on Earth for centuries, but now is at risk of fossilizing into yet another oppressive institution.

These three plots are braided together in a polyphony full of thematic resonance, where events in one time period are mirrored in the next, a character's prayer in the future is fulfilled in the past, and particular sensory experiences reverberate across the eras at key moments of decision. Even quiet, contemplative scenes bear the tension of multiple threads leading to other characters having the same thought, other conversations wrestling with the same question, other versions of humanity dealing with the same basic yearning.

Yearning is a core theme of this novel. The reader is made aware of it since the very first page, where a quote by C.S. Lewis says, "If we find ourselves with a desire that nothing in this world can satisfy, the most probable explanation is that we were made for another world." That is absolutely not how probabilities work, or how explanations work, or how desires work, or how worlds work, but it's the frame of mind from which the whole story is conceived: the ancient doctrine that this material world is made of imperfect reflections of a more "real" world, and that the purpose of life is to heal the divide between us and that other world. The title of the book refers to the difference between seeing a reflection of a star with our flawed human senses and perceiving the real thing via more direct means. Across the novel, this is expressed through the frequent motif of characters pausing to notice Venus in the sky. Every time it is mentioned, Venus is used as a symbol of the things that are desired but appear unreachable.

Much is made of the condition of Venus and Earth as twin planets, because twins are another motif in the book. Twins appear in Maya creation myths as the heroic founders of humanity, and twins reappear in each era of The Actual Star as symbols of the fundamental tragedy of human life: that we are so much like each other, yet are irrevocably unique and separate, that we desire togetherness, but the universe tends toward increasing separation. Every variation of this is explored, from the trope of quarreling twins separated at birth, to the mythic cosmology of a spherical universe cleft in halves, to the enmity directed inward in the act of self-cutting. A cut can be understood as an abyss separating two parts, but also as a passage connecting them. The sacred cave that connects the three narratives is clearly a wound in the earth, a wound turned into its own world. The most dramatic extrapolation of this motif is the notion of afterlife in Laviaja, whose devotees hope to be snatched into the other world through a cut in the fabric of reality.

Now one may wonder why they would want to leave this world, if Laviaja has supposedly turned it into a utopia. But no utopia can satisfy every wish. In the pacifistic anarchy of 3012, nation states no longer exist. In their stead, each individual builds their own identity from three key components, the terms for which are an imagined evolution from real Spanish words. "Genéra" corresponds to gender identity, except that the options available are named after cardinal points. "Manéra" is aesthetic presentation, more or less like the way you can tell apart an emo from a hipster from a furry from a ganguro, but expanded to include every possible aesthetic, even ancient Romans, mermaids, or Swan Lake Odettes. Finally, "preféra" is this world's version of the top/bottom axis, which is a choice open to all because humans in this future are genetically engineered for fully functional hermaphroditism (another instance of the ancestral yearning for the reunion of split halves).

Where it gets dystopic is in the extreme way Laviaja handles social relations. As the book itself declares, "peace needs enforcement," and later, "peace requires sacrifice," which is a nicer way of saying that any sufficiently coordinated anarchy is indistinguishable from a state. I wouldn't want to live under a regime where anyone who sees my face can instantly know every conversation I've ever had and every place I've ever been and exactly what I like to do in bed; where a world-spanning computing network dictates what job I'll do that day and whom I can gift my possessions; where the entire world can cast me out for speaking in favor of lasting human connection. A world where privacy is frowned upon as a form of hoarding, where the justice system is literally panoptic, is not a very desirable world. Laviaja was founded originally as a movement of climate refugees, who became the majority of the human population after unchecked exploitation of resources reached the point of unsustainability. The problem is that emergency measures devised to deal with an extreme situation became codified as the norm of everyday living. That is the conundrum the protagonists face in 3012: must they continue a lifestyle adapted to near-extinction conditions, now that human survival has been ensured? Just because it is the nature of the universe to break apart and break away, must they hold on to nothing?

The sections set in 1012 present a horrifying alternative: instead of escaping this world, you could submit to the captivity in which we are all born. The scenes in the royal palace describe the sacred ball game of the Maya people as a ritualized ratification of the social contract whereby some are always fated to win and some are always fated to be sacrificed.

The sections set in 3012 suggest a different way: we cannot pretend that change won't happen. What we can do is to consciously steer it. Otherwise, we no longer belong to the order of things. We may as well not be in the world.

Rejection of this world by comparison to a perfect afterlife is nothing new. In her recent video interview with John Scalzi, Byrne described the religio-political structure of Laviaja in these terms: "it's as if the entire planet is one nomadic monastery." That choice of wording points to the danger at the core of this system: for all its emphasis on individual freedom, it lends itself too easily to dogmatism. In each era of the story, we see the harmful effect of rigid social rules, which the reader can infer by the degree of access allowed to the sacred cave, a stand-in for access to ultimate fulfillment: in 1012, only the royal family can reach it; in 2012, only those with disposable income and lucky passports can; in 3012, it is supposedly open to everyone, but no one is allowed to stay. Time and again, the yearning for union clashes against the reality of separation, but it is separation which makes desire possible.

As a story about the way all things break apart and break away, it is remarkable that The Actual Star holds together until the end. Byrne displays here an expert mastery of the techniques of the craft, using repeated themes as a vehicle for unique characters to come alive, letting their choices speak the points and counterpoints of a long discussion spanning centuries of history. The plot transmutes the cruelty of empire into the joy of perpetual diaspora, the rudeness of the tourist gaze into a celebration of impermanence, the disjointedness of an incomplete historical record into a tool of narrative creativity. Just like Leah was said to have disappeared in the cave, but actually found transcendence, just like the Maya people are said to have disappeared in history, but actually survive in new ways in the real world, you may feel at times that you lose yourself in this book. What you find at the end of the passage is unique to you. It depends on the god of the place where you are while you experience it.

Bonuses: +2 for the skillful interweaving and rhyming between the three timelines, +2 for numerous poetic descriptions that serve as an effective complement to the narration.

Penalties: −1 because Leah, the central character of the book, the foundation for a major religion of mutual help and acceptance, the pivot around which the entire history of the planet turns, too often comes off as an insufferably fastidious brat, −1 because too many dialogues and choices in the 2012 sections are evidently inserted because the plot demands that they happen, −3 because, for a novel that relies so heavily on Spanish, it commits numerous orthographic and semantic errors in representing the Spanish of the present day. (The ones that are most impactful to the plot are the false friend actual, which means "current" or "up-to-date," not "real;" and the noun jugador, which does derive from the verb jugar, but does not share its dual meaning. Jugador only means "player" of a sport or a game, not "player" of a theatrical role. Less crucially, but more irritatingly, "vámanos" is not even a word that exists in Spanish. The correct spelling is "vámonos.")