A fun thought experiment without a clear aim or meaning 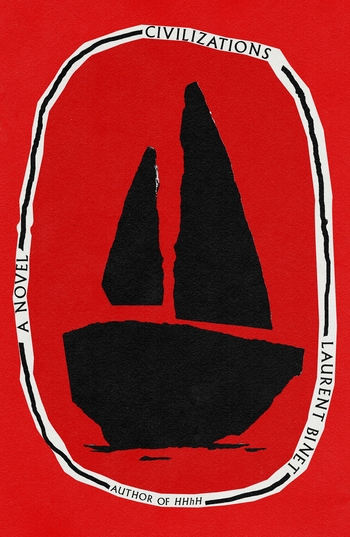 If you move past the thousands of stories where the Nazis win and the thousands more where the Confederacy wins, the third most popular alternate history scenario would probably be reverse imperialism. Novels like Orson Scott Card's Pastwatch, Christopher Evans' Aztec Century and Federico Andahazi's The Conqueror play with the suggestive possibility of Native Americans being equipped to fight off the European invaders and maybe even conquer Europe. Because of the nontrivial technological difference between both continents in the 1500s, plotting a believable Montezuma's Revenge requires either inserting an earlier event that delays the development of European warfare and/or boosts Native military capabilities. Unfortunately, this also requires the attribution of European colonial practices to Native populations, which ends up revealing more about Europe's unconfessed anxieties than about real-world justice.

Laurent Binet's alternate history novel Civilizations was originally published in French in 2019 and since then has been translated into a number of languages, with the English version by Sam Taylor just out this year. It describes an Inca invasion of Western Europe, starting with the aftermath of the Lisbon earthquake of 1531. Just as the weakened Portuguese are starting to recover, Inca leader Atahualpa marches on and accumulates victory after victory until he becomes a force capable of challenging the Holy Roman Emperor and the Ottoman Sultan.

The book is written in a breakneck pace that does no service to its massive scope. Instead of reading literature (in the artistic sense of the word), it feels like reading a history book. This kills any chance for enjoyment. Civilizations covers centuries' worth of plot across dozens of countries, but it's written in an over-summarized style that is set at too much distance from the events. The reader would like to witness the diplomatic meetings and the battle planning sessions and the oceanic trips, but what the book delivers is the CliffsNotes version of itself. Conversations that should be captivating and impactful are instead reported second-hand, as if by a journalist held to a word count limit. Huge military campaigns breeze by without taking the time to leave an effect on the reader. World-changing decisions are remarked upon with no weight; romantic liaisons and political betrayals proceed matter-of-factly. The plot just occurs by a methodical procession of steps. No event is allowed to breathe.

The substance of the novel is the third section, where Atahualpa marches over Europe. The first two exist only to provide the bare minimum of justification for why Atahualpa is able to do this. They tell how Native Americans learned ironsmithing (from stranded Vikings) and shipbuilding (from a doomed Christopher Columbus), but they hurry past the reader's eyes so soon that their characters don't feel like full people but like ingredients in a recipe, as if the author was irritated with the need to explain the story and couldn't wait to be done with this part. It doesn't fulfill any deeper purpose to have Vikings reach precolonial Cuba and Peru: they're just there under a painfully shoehorned excuse with the sole purpose of delivering horses and antibodies before promptly exiting the stage. Likewise with Columbus, who only seems to be in this novel to leave his ships in Cuba and die.

This use of people as pawns is consistent with the novel's stated position on history as a process that does not follow the direction of human choices but merely unfolds from impersonal forces that take no account of our wants. At one point the narrator says, "if we are honest enough to recognize the truth, rather than imagining that we are masters of our own destiny, circumstances made the decision," and later it refers to "fatal destiny, which directs, arranges and settles everything in its own way." If a destiny beyond the grasp of human comprehension is already a suspect notion in historiography, it's fatal in fiction. Binet does not treat his characters as autonomous moral agents but as pebbles dragged by the river of history.

If the beginning of the novel is about putting the pieces in place, the main, third section tells an even more improbable journey by Atahualpa, the last heir to the Inca throne, all the way from the Peruvian mountains to the Caribbean islands. He has no logical reason to go there, but the plot needs him to stumble upon the ships left by Columbus and refurbish them for a trip to the unknown lands of Europe, which for some reason he finds preferable to the more urgent matter of resolving the civil war in his own kingdom. Binet can't seem to decide whether Atahualpa is a shrewd tactician or a political amateur; the way he somehow never loses a battle yet fails to understand the larger context of European royal rivalries has a just-so quality that makes the whole affair harder to swallow.

Civilizations is a good example of why you need sensitivity readers when writing about oppressed peoples. The first two sections, where Europeans make contact with Native Americans, abound in otherizing clichés like "We are at the mercy of Skrælings more ferocious than trolls" and "It was obvious to me that these were people lacking in everything." Even later, when telling events from Atahualpa's perspective, the text still refers to him as a being possessed of an "animalistic survival instinct," and the Nahua tribes are described as "a fierce, bloodthirsty people." And for a French writer to treat the conquest of Algiers as a historical necessity leaves a lingering bad taste.

Although this was probably not a good story idea for a white writer to undertake, it's curiously fitting that a French writer expends so many lines in singing the praises of Cuban vegetation as a place of mysterious wonders, given that it was precisely Cuban writers steeped in French literature (Lezama, Sarduy, Carpentier) who first spread the tropes of magical realism that so often have reduced the Americas to an exotic stereotype. Unsurprisingly, Binet treats this stereotype as unquestioned fact when he writes about the "dazzling torrent of colors" that assaults Europeans when they land on Cuba.

The alternate world of Civilizations is an experiment that doesn't bother to reach conclusions. Completely ignoring the fact that the Inca Empire was in every way an empire, Binet imagines a utopia of agrarian reform and religious equality that has too much of guilty wish fulfillment. If in the real world the French imposed an emperor on Mexico, in this fictional timeline the Mexicans impose an emperor on France. What does this say? What truth about humanity are we meant to infer? Binet does not seem interested in those questions. The novel comes off as a "Heh, take that" and nothing more.

Bonuses: +1 for the fictional letters between historical figures, the only sections where events appeared to be of serious consequence.

Penalties: −1 for being the millionth novel to perpetuate the myth that Medieval Europeans thought the world was flat.