Microreview: When the Goddess Wakes by Howard Andrew Jones

When the Goddess Wakes solidly ends Howard Andrew Jones’ Ring-Sworn Trilogy, as the titular threat, building since the beginning of the series, brings danger, adventure, and notes of heroic sacrifice. 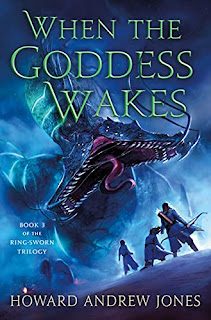 Howard Andrew Jones Ring-Sworn Trilogy has been a recent highlight and hallmark of positivist heroic epic fantasy. In strong contrast to grimdark, morally grey epic fantasy that has long been a dominant note, the Ring-Sworn Trilogy has opted for the path of less ambiguous protagonists and antagonists, and highlighting and emphasizing the importance, and effectiveness of positive action and standing up for one’s beliefs, family, and country.  All of this takes place in a richly created multiverse.

So what about this last volume,  When the Goddess Wakes, about in particular?

This book follows quickly on the heels of the second novel, Upon the Flight of the Queen. The Dendrassi war with the multiverse spanning invasion of the Naor has ended in peace and a tentative alliance against the greater threat of the aforementioned Queen. Alantris is a wreck, Elenai is being hailed as a Queen, much to her chagrin, but the threat and stakes have been raised, as the Goddess that the Queen wants to raise would and could have the power to unmake the entire multiverse, and has the desire to do so.

The challenge in this final volume is to face off against the Queen, and her Goddess. It is a quest that takes the characters across the realms in a desperate search for the tools to do so. Meantime, of course, their enemies are not idle, and there are those who would take advantage of this conflict for their own ends. And plenty of surprises and revelations about various characters and even the nature of the multiverse.

Our points of view remain the same from the first (and second) novel, keeping the deep focus on our heroes: Elenai, the young Altererai Corps member whose discovery of a false sword hanging in place of a real one sparked the events of the entire series, is uneasy with people acclaiming her as a Queen. And yet it is her that the Naor (especially in the personage of their leader, Vannek) respect and it is her that is the glue for that alliance and for what of the decimated forces remain to face this last and most greatest threat. When the Goddess Wakes tests Elenai to the greatest extent yet, making her live up to her heroic epithet of Oddsbreaker.

Rylin (Rylin of the Thousand), in the meantime, has had it rough in extricating himself from his infiltration of the enemy councils to manage uneasy relationships with allies of dubious provenance in order to find a way to counter the threat of the Queen and the Goddess she is raising. His is also a slightly lovelorn story, as his attraction to Varama, leader of the resistance against the Naor in the second volume, is obvious, and not reciprocated (Varama, frankly, has Other Things to Do). Readers going back to the first volume and following his story can find some irony in this turn of events for him.

And then there is Vannek. Vannek is the leader of the remnant of the Naor horde which was the big threat in the second book. Now an uneasy ally with their former enemy, Vannek must navigate holding his forces together and facing an even greater threat, and be true to themselves as well. Vannek provides an outsider perspective to the world of the Altererai, Darassus and Alantris in general. One thing that Jones touches on, for readers who might have forgotten, is the filip and twist that the Naor are, in a real sense, the “humans” and the Darassians are, in effect, to the Naor, Elves of Faerie. The Naor “horde” is really humans trying to invade Fairyland.  It makes sense- despite the blood magic of the Naor, and their dragons, they don’t have the magical abilities Elenai, Rylin and company share. They live, relative to the Naor, in the midst of changing, and shifting realms of reality, the shards. Some of them even might be gods from a certain point of view, or to their own mind. This makes me think of Steve Brust’s Dragaera, which is of course a Faerieland to the few humans (like Vlad) who just happen to be living there amongst the native population.

But what this novel has over Amber, and yes, Dragaera is its commitment in word and deed, to inclusivity. This novel, especially of the three novels, makes it clear how welcoming a fantasy this is for all readers of any stripe. The aforementioned Vannek, although the term isn’t used in the series itself, is transgender and Vannek’s struggle with finding themselves is a theme that was touched in the second volume but gets more play here with Vannek’s further importance to the leadership of the remaining Naor horde. Other characters are depicted as gay, bisexual, and polyamorous and while having a character call this all out in dialogue may seem like “virtue signaling” to a certain mindset, it does help hammer home Jones’ point that heroes come in all stripes and types. You, too, can earn a heroic epithet, if

As in the previous novels, there is a real “second generation of Amberites” feel to Rylin, Elenai, Vannek and their peers. The big wheels of the previous generation are here, sometimes in unusual or not quite hale and complete manners--Kyrkenall and N’alhr in particular, make room for the new generation to step up and take charge. The older generation, in power and influence are important, crucial, even, but in the end this is the story of the new generation rising up and facing challenges and overcoming them, not taking an assistant role to their mentors and higher ups. Throughout the series, Jones has done a great job with this from the beginning, and it is here in the final volume that the “second generation” really steps up. This sort of handoff is a tricky thing to do in any fantasy but it is part of the fabric and the point of Jones’ world.

While the second novel was somewhat darker that the first in terms of plot and events, this third novel, while remaining true to its roots, definitely leans into the third book of the trilogy where the hard choices have to be made, the most noble of stands, and yes the heroic sacrifices. Characters that go back to the beginning of this series are tested, and do die bravely against terrible enemies.

The characters live up to the Oath of the Altenerai:

"When comes my numbered day, I will meet it smiling. For I will have kept this oath.

I shall use my arms to shield the weak.

I shall use my lips to speak the truth, and my eyes to seek it.

I shall use my hand to mete justice to high and to low, and I will weight all things with heart and mind.

Where I walk the laws will follow, for I am the sword of my people and the shepherd of their lands.

When I fall, I will rise through my brothers and sisters, for I am eternal."

Or, from our own world,  to quote Horatius:

Then out spake brave Horatius,

The Captain of the Gate:

"To every man upon this earth

And how can man die better

For the ashes of his fathers,

And the temples of his Gods."

I can hope that this series will make more readers, and publishers take notice of Jones’ talents in specific and in general the value, importance, and joy in positivist, heroic, optimistic fantasy, even as terrible things happen and noble heroic sacrifices occur.  There will always be a place for morally grey protagonists, hard and dark situations and themes, and “evils which exist to oppose other evils”. I wouldn’t want grimdark and dark fantasy to ever go away. The Ring-Sworn Trilogy, ending here with When the Goddess Wakes, however, shows that for me, oftentimes, I would like scoop sof the complex and bright Madagascaran Vanilla ice cream of Heroic epic fantasy in my reading diet  to go with the dark chocolate ice cream of Grim and dark epic fantasy in it.

As always you won't want to start here. Go start with For The Killing of Kings and plunge into this world, characters and ethos of entertaining heroic fantasy.

Bonuses: +1 for excellent action beats and spirit of adventure that keeps the pages turning.

+1 for a strong, diverse and interesting cast of characters.

Penalties: -1 A couple of the bits of plotting felt a little jangled and rushed