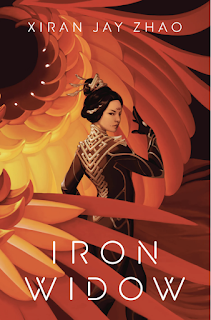 Wu Zetian is a woman on a mission. In a Chinese inspired world where humans are at war with the alien Hundun, giant beasts which regularly cross Huaxia's border wall and unleash devastation on the provinces beyond, humanity's only hope lies in the Chrysalises, giant robot fighters with two pilots, one male, one female, who can transform and unleash elemental attacks to keep the invaders at bay. Zetian dreams of becoming a concubine pilot, following in her older sister's path, but not for the reason one might imagine: while it's considered acceptable and normal for women to die while piloting the Chrysalises, as part of the mental strain of the process, Zetian's sister was killed out of battle by a pilot's misogynist violence. This has deprived her family of the payout they would normally receive for her sacrifice in a chrysalis, and also massively pissed Zetian off. In a move that has nothing to do with the finances of a family that doesn't want her anyway, she changes her own life course, and leaves behind Yizhi, a local rich kid who has taken a shine to her but isn't likely to offer her any real security, and signs herself up as a concubine to the same pilot, hoping to murder him before he gets the chance to kill any more women.

The bad news is that this plan doesn't work, and Zetian gets crammed into a Chrysalis cockpit after all. And yet, when the battle is over, it's the male pilot who has died of mental stress, and Zetian gets a brief moment of radiant feral awesomeness before she's thrown into even deeper water, pushed into the heart of the system of Chrysalis pilots and the people who control them. Zetian finds she has allies - importantly they are two hot boys, more about them later - but that being powerful and irrepressible is a tough role when the entire system is set up to control and/or kill you. Zetian also learns that piloting giant robots in battle against supermassive aliens while psychically linked to damaged boys is hard work, no matter how cool it looks to the reader. And hey, it sure does look pretty cool. They even transform and light up! I can only assume the line of action figures is on its way.

At its foundation, Iron Widow is an exploration of an exploitative, restricting misogynist system, one which takes a lot of its methods of control from Chinese history. For example, Zetian has bound feet and is often frustrated by the way they restrict her mobility, even as she gets more resources and options to deal with it. It's considered acceptable for women to die while piloting Chrysalises because they simply don't have the right levels of spirit energy, and families like Zetian's are perfectly happy to throw their love and expectations at male relatives, thinking of daughters only as a possible source of financial gain. There are a few rare female Chrysalis pilots who have formed "perfect matches" with their male counterparts, and these are held up as aspirational for the rest of the girls: sign up to a system that will probably kill you, because it might not! For the first third of the book, the level of restriction and violation and sheer unpleasantness thrown at Zetian made me feel physically ill. That it's a depiction rooted in historical fact - Zetian herself is a manifestation of a real Tang Dynasty empress, and many of her fellow characters are based on real historical figures too - makes that depiction all the more powerful and hard to stomach. It's a rough ride, but it's one that makes the connections Zetian goes on to make all the more powerful.

At the risk of a very obvious spoiler (yes, the YA protagonist survives to end of her own book!), Zetian's turning point is with her second pilot, the notorious convicted criminal Li Shimin. Li only remains alive because he's capable of piloting the Vermillion Bird, an extremely powerful Chrysalis, and the cost of his deployment is that, until Zetian, every girl who has been paired with him has died. Unlike many of his fellow pilots, Shimin is deeply traumatised at being part of this system, and Zetian's ability to match his power and forge a mental bond while they pilot together means the two of them get very close, very quickly. In any other book, the reappearance of Zetian's old flame Yizhi would set up some dramatic love triangle shenanigans, but instead Yizhi becomes another part of their pilot bond and the romance turns polyamorous. This is set up and executed in a way where I couldn't imagine it playing out differently: both are incredibly important to Zetian, who also has far more important things to do than agonise over which boy to pick, and both Shimin and Yizhi thrive on the connections with her and with each other as well. Their relationship provides a tiny anchor of hope and stability, giving Zetian - who started off the book ready to throw her life away on a small revenge quest - something to fight for as she unravels and challenges the assumptions behind the chrysalis system. Importantly, this involves a massive challenge to the gender essentialist aspects of that system, making this that rare book that confronts "gender based magic" as being just as much a social construct as gender itself.

This all makes Iron Widow sound like quite a heavy book, and in many ways it is, but its also about giant robots battling giant aliens and for that to work, there has to be some fun to go along with the desperation. Iron Widow delivers on that too: I'm not a regular consumer of kaiju and mecha content so perhaps I am getting excited about something basic here, but I enjoyed the descriptions and the physicality of the fights, as well as the explanations of the elemental magic system and how it affected the Chrysalises strengths and powers (also, did I mention that they transform and light up?). Beyond the Chrysalis - Hundun conflict, some of Iron Widow's worldbuilding gets a bit sketchier, and there's some big escalations and introductions towards the end of the book which come in very quick succession and could have benefited from having more space to develop. On the whole, though, this is a really entertaining package, one which delivers on some satisfying YA tropes while pushing others in different directions. I'll be awaiting the sequel with excitement!