A surprisingly and ultimately happy novel, which is not necessarily the norm for for Seanan McGuire and October Daye. 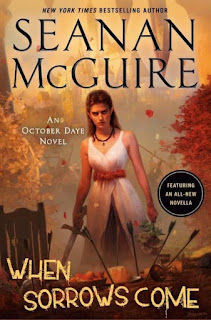 I remember reading Katherine Kurtz’s novel King Kelson’s Bride when I was younger (but not quite as young as I thought I was since the novel was published in 2000) and being disappointed that it was a novel about a wedding. It was, potentially and partly, *gasp* a romance. Other things happened in that novel, but the main thing is the wedding. It was King Kelson’s “Bride” after all. I was younger then.

When Sorrows Come is the fifteenth October Daye novel and this is the wedding novel, the one where Toby and Tybalt get married. Seanan McGuire is really good at exposition and recapping, because you could *almost* jump into When Sorrows Come without having read the preceding 14 novels, and you probably can, but the problem with that (and it is not a problem) is that When Sorrows Come is earned by everything that came before it. Readers care because they’ve been on the journey with Toby from the start - from being turned into a fish and trying to have as little to do with faerie as possible to reclaiming her position as Sylvester’s Knight to becoming a Hero of the realm, from an initial distaste regarding Tybalt to a casual alliance and almost friendship to straight up courtship and romance. The other character arcs are just as notable and it matters that you’ve been on this journey because When Sorrows Come pays off so much.

The wedding party makes their way to the High King’s Court in Toronto, moving the action away from San Francisco and into the family home of Quentin’s parents (the High King and Queen, naturally) and it’s pretty quickly evident that something is wrong because of course something is wrong and as such, things go wrong pretty quickly and there are dead bodies and Toby is leading the investigation on why there is treason and dead bodies and all the while inching ever closer to her wedding (for which is only a day or so away) and with fears from Tybalt that this is all just a way for Toby to get out of marrying him, thought not going so far as to suggest that this is her fault but more that she always jumps in with everything she has and is.

There’s a larger plot against the High King’s throne and several swords of Damocles hanging over Toby - there’s no way we’re done with Amandine and at some point Oberon has to officially decide he wants to announce himself and return and that’ll change everything - but despite all of the blood and death and not knowing, When Sorrows Come is ultimately a celebration.

It is perhaps a funny thing to say after talking about all the blood and plots and dead bodies, but When Sorrows Come is ultimately a positive novel. On one hand there is a lot packed into a few tight chapters, on the other hand it feels spread out and diffuse as we gradually work our way to the actual wedding ceremony. It would have been such a cop out to delay Toby and Tybalt’s wedding any further and McGuire doesn’t. Spoilers, I suppose, but this is the wedding novel and we do get to that happy event. There is a brief sense of a farce (in the category of a comedic sub genre) when we finally get to the ceremony and oh, it’s one more thing! But we get there and there are some very nice and deeply satisfying moments. There are moments to breathe and there is, ultimately, a happy ending for Toby. This isn’t the final novel in the series, but maybe this is the book we need in the middle of a pandemic that just won’t end.

Bonuses: + 1 the included bonus novella "And With Reveling" is a really nice postscript that is functionally just the wedding party and all of the formal blessings Toby and Tybalt receive. There are some nice moments and it serves as an epilogue more than a bonus novella.

Penalties: - 1 Some readers will be disappointed by the relatively smaller narrative and (thus far) lack of follow through on the major event from the previous novel.

Joe Sherry - Co-editor of Nerds of a Feather, 5x Hugo Award Finalist for Best Fanzine. Minnesotan. He / Him
Posted by Joe at 12:00:00 AM