Microreview [book]: In the Deep by Kelly Jennings

Conflict, intrigue and intergalactic politics embroil the crew of the Susan Calvin in revolution and a possible outright war. 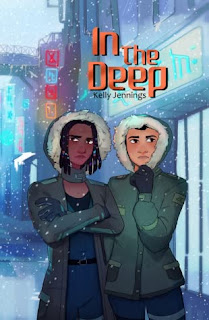 Velocity Wrachant is doing all right working for the Pirians, having come a long way from the near hand to mouth existence seen in at the beginning of the previous novel, Fault Lines. She still has a measure of independence, at least outwardly, something important for someone who ran away from the bounds and strictures of House life, but she does still have responsibilities and duties. Like, for example, visiting the planet Durbin and making contact with a group of workers seeking to overthrow their tyrannical overlords all the while with the true cover of trying to make trade deals. But not is all that it seems.

In the meantime, Bronte, her charge picked up during the events of the prior novel, is now on a Pirian ship, the Sungai as a general cadet. While she did not test well to be placed in a ranked position on the Pirian ship, being a cadet will give her a chance at a variety of roles and duties. But when the Sungai calls on a mining station that might have some of the cohort of genetically engineered Calypsos, once again, Bronte is in a situation that is definitely not everything that it seems, and definitely not to her advantage.

These are the stories of Kelly Jennings' In the Deep.

One thing I did appreciate right from the get go is the synopsis of the previous book, Fault Lines. While I personally had read the book not long before picking up this second volume, it was good to have this here for those readers who want to start with this novel to start here. For readers who have read Fault lines, the key takeaway is that this tells the reader right off that this new novel is set three years later. The glossary at the beginning of the book also helps the reader get grounded in what is definitely a complex and complicated space opera universe.

That complex and complicated space opera universe seen here, with the aid of the Glossary, does not prevent new readers to Jennings' verse from picking it up, because we are in a new and different area than the previous novel. The ground rules are different, both the planet Durbin as well as the Pirian ship Sungai. The novel immerses us quickly into these two worlds. In the case of Velocity, who is definitely not a planet kind of person, it is through fresh eyes and unfamiliarity with an environment she is not used to.  On the other hand, when we start Bronte's story, she has been on the Pirian vessel for quite some time, and this second narrative (which waits a few chapters to get going and then the narratives start trading off) is a little more "Deep end" in its approach with a protagonist clearly at home in her new environment.

But in both, the deep and immersive worldbuilding building into and through the characters, as seen in Fault Lines is in full effect here. Jennings world once again is a diverse one on all axes, and the tactile and sensory details really bring the experience of living on a spaceship, or visiting an alien planet, home for the reader. This is a space opera universe that really comes alive for the reader, but it is a space opera universe that the characters channel rather than a more impersonal approach. How Bronte feels about various stations as she travels the ship, how Velocity is uncomfortable being on a planet.

Meld that aforementioned worldbuilding with a web of plotting and intrigue, and you have a slowly and steadily building set of narratives that lead to the climactic confrontation as the threats and problems that both Velocity and Bronte face come head to head.  The secret sauce of course is the characterization of course. This is a universe where those plot threads, those moving currents that Velocity and Bronte must face, come from human concerns, human problems and human ambitions. While there are organizations and large entities (like the Combines), in the end it's people making those decisions, wielding that power, and ultimately threatening our protagonists and their goals.

While this all makes it sound like a continuation and an extension of the previous novel (no bad thing, mind you), with In the Deep, theme takes a front row seat for a change in the novel. The hardscrabble life Velocity led in the prior novel and the "take anything to survive" gets inverted and highlighted here in full as both Velocity and Bronte come face to face with the politics, sociology and the human costs of labor and the exploitation of labor by others. The novel explores what those seeking profit or advantage will do to those under them to maintain those profits and advantage, up to the use of force. This is all the richer given both Velocity and Bronte's origins with wealth and privilege in the Combines, and that conflict and dichtomy absolutely does get addressed and called out here. In a time and age as I am writing this with the Pandemic, and workers seeking better ways of working and better compensation for same, the message of In the Deep is especially powerful, and relevant.

In sum, Jennings brings all of the talents seen in her previous novel and stories to fruitful flowering:. Intrigue, adventure,  worldbuilding, strong character focus and development, all within a diverse and rich space opera universe. In the Deep as a novel evoked for me notes of space opera doing space opera at its best: C.J. Cherryh, Lois M Bujold, Arkady Martine, and Frank Herbert's Dune.  Jennings offers character development and worldbuilding in spades to make a fractally complicated and lived-in universe that feels real and lived in.

Bonuses: +1 for a continued committment to a diverse and rich set of characters and universe

+1 for excellent use of theme in this novel, a levelling up of the writer's talents and skill

Penalties: -1 Some switching of point of views could have been handled a bit better

Reference: Jennings, Kelly. In the Deep (Candlemark and Gleam, 2021)