Microreview: The Land Across by Gene Wolfe

The Land Across is a late Gene Wolfe novel about a travel writer’s adventures in a small and very weird Balkan country. 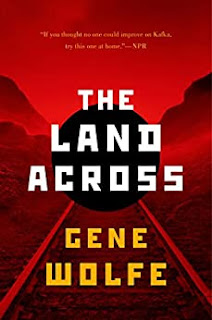 Grafton has a problem. He is a travel writer in the mold of Rick Steves, writing about his adventures, taking photographs, having adventures. He is trying hard to get to the small and isolated country (never named) that is somewhere between Greece and Romania on the Orient Express route. Getting into the country, notoriously difficult is just the beginning, as he winds up in a first Kafkaesque situation, and then a more supernatural one, as he struggles to make sense of the world of Gene Wolfe’s  The Land Across.

Gene Wolfe novels, especially his late novels, have some things in common, elements you expect, tropes and motifs you are hoping for. Unreliable narrator. Check. Mis-identification or confusing identification of characters in various guises. Check. Land with customs that are strange to a stranger in a strange land. Check. A book that you probably have to re-read to really understand what is happening. Check.

There is much here for the reader, as usual. This is Wolfe’s first and only dive into Kafkaesque fiction, and there is a delight in seeing Wolfe try a new subgenre for the first time. He’s done his research, has done the reading, and Grafton’s situation at first does feel like something out of Kafka. Once he actually gets to the borders of the country, he is arrested, his passport taken away. But instead of going to jail, he goes to a weird house arrest setup with a local man named Kleon and his wife Martya. As he strives to extricate himself from a situation where he can’t prove his innocence, Grafton gets himself in ever deeper, including winding up working for the JAKA, the Secret Police (who insist they are not Secret because people know who they are...) As a traveller who has been to a number of countries, I found Grafton’s efforts to understand the country he is in rather resonant. Although to be fair some of this does fall away as the novel progresses and there is a dangling bit that I may have missed or may require a re-read (again, a feature of Wolfe).

The back half of the novel changes things up entirely and in two directions. First, in an East Germany sort of mode, Grafton himself finds himself recruited into the JAKA himself as an operative. That is odd enough that he embraces this role, but the supernatural elements of the book, which were pretty understated and backgrounded in the first part of the book (there is a “haunted house”) come really strongly into the second half of the novel. While I was expecting vampires, the supernatural threats that Grafton faces are definitely different. There are no vampires in this book. I think, anyway. Remember, this IS a Gene Wolfe novel. So, overall, the second half of the novel feels like it is a very different book. As soon as events take Grafton out of the small town he starts in, the novel’s pacing and feel are very different indeed. I wouldn’t quite say they are two different novels, but the novel’s hinge is clear (and you will know it when it comes) and then it switches gears.

There are things, though, that are somewhat lacking in this novel. The prose is all right, but it just does not *sing* in the same way as it does in a lot of his other work. Grafton as a travel writer should have a better command of prose than he actually does, and it hurts to read/listen to that in a Gene Wolfe novel that the language fails to sing as well as it should. There is also that lack of deep vocabulary and wordplay that I highlight in a Gene Wolfe novel, although I do note that the word across in latin is “Trans”, and Land of forests is Sylvania, so The Land Across *could* be translated as Transylvania. So there is word play right there in the title.

But Grafton as a character frustrated me in the second half of the novel, to be honest. I think this may be a case of not understanding him completely (first read, remember). He starts off rather understandable as a travel writer thrown into a really Kafkaesque situation. When the gears shift and he becomes part of the JAKA and immersed in the supernatural elements, it feels in some ways like this is not the character we have met before. It doesn’t feel like a revelation or a uncovering, it feels like it comes out of left field.  He's *eager* in his role in the JAKA that didn't seem supported by the earlier portions of the book. Again, this may be me only reading this for the first time, unreliable narrator, and the usual tricks that you find in a Wolfe novel. A good rule of thumb is: If you think you understand a Gene Wolfe book completely on your first read, you probably are deluding yourself.

However, while it is difficult to completely understand a Gene Wolfe novel in its first go, and it takes a second or further read to really understand and get what he is after, this is not a novel that I am entirely excited to revisit. Book of the New Sun? The Wizard Knight? The Soldier novels? I still want to dive back into those again and maybe yet again, to dig for meaning and the richness of the narrative. While I have questions about the beginning, in light of what happens in the denouement, there isn’t enough here in this Wolfe novel to make me want to re-read it and figure it out, and that in the end, is a shame for a Gene Wolfe novel.

Mind you, an average Gene Wolfe novel is better than many other authors good novels, but in the end, this is only an average Gene Wolfe novel, and if I am going to damn it even further, it is a Gene Wolfe novel that you really won’t be rewarded reading unless you are like me and want to read all of his work. Readers who want to try his work for the first time should probably go with The Fifth Head of Cerberus, Readers who want to go with his later work probably are better served with The Wizard Knight or The Sorcerer’s House. (The Borrowed Man is still unread by me, I am curious and hopeful this works better for me than The Land Across does).

Bonuses : +1 For an unusual subgenre for Wolfe to put his oar in that he does fairly well, especially in the first half of the book.

Penalties: -1 The two halves of the book really don’t harmonize on a first read

Nerd Coefficient: 7/10 for previous readers of Wolfe, 6/10 for readers new to his work.