Three valiant bookworms connected by pain, fear and fervent hope, in a breathtaking journey across time 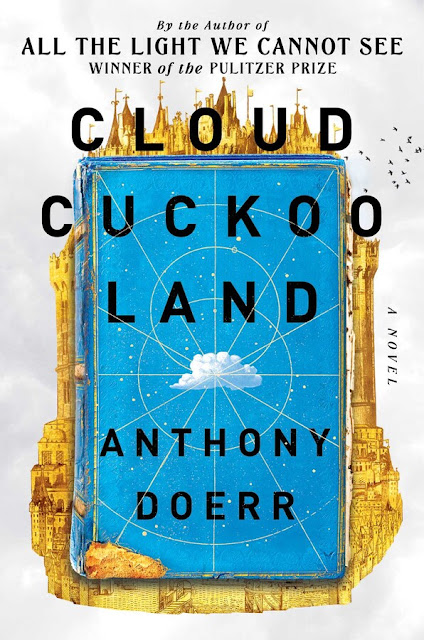 Imagine a novel that does all that.

This novel is fearless and boundless in its ambition. It's like Homer meets Borges aboard Noah's Ark. It's like The Name of the Rose meets The Neverending Story at the Foundation's Edge. It's like The Golden Ass meets The Oracle of Stamboul in the Cemetery of Forgotten Books. It's like The Book Thief meets The Charioteer in the Cloud Atlas.

Cloud Cuckoo Land is aware of the sky-high goals it's set for itself: a key chapter toward the end is titled "The Super Magical Extra Powerful Book of Everything," and it refers to a supposed location in the middle of the cloud city where the visitor can see the whole world at once. The way the text describes this literal bird's eye view of all the beauty and all the horror of the world goes, "On one side is dancing, and the other is death." This becomes a motif across the time periods of the novel. The inhabitants of Constantinople try, until the horrid end, to cling to their normal lives while the enemy shoots cannon balls at the city gates. Centuries later, in the public library, the classicist tries his best to keep a group of children occupied in a theater play while a would-be murderer lurks next door. But in the attacker's eyes, he's the one trying to keep the world safe from the encroaching depredations of humanity. And yet more centuries later, a girl is hidden in a sentient archive with digital files of all human knowledge while an unknown plague spreads outside. In each case, under the gnomic gaze of birds able to peer into the past and future, the liferaft of choice, the only solid refuge in a world that whirls into chaos, is stories. The recitation of the same ancient book serves not only as a distraction from the danger, but as a ritual meant to ward it off, to keep the noise from crushing you, to force death to wait. As long as you keep reading, the world will not end.

However, such a refuge can easily become a tomb. The novel warns repeatedly of the deceptive safety of seclusion. At one point, a character describes himself as "a fish inside a sea inside a bigger fish inside a bigger sea," then another one recalls a legend about a book "locked inside a golden box, which was in turn locked inside a bronze box, then inside an iron box, inside a wooden chest," and later, another one discovers she's trapped "in a circular room at the center of a circular white structure on a mostly circular island." Just like this book contains stories that contain stories, its characters inhabit multilayered structures that somehow maintain both vertical progression and horizontal simultaneity. The plot follows three time periods in parallel, but its characters all read the same book at the same pace (as do we when reading this novel). As the text itself declares, "time folds over itself" and mythic allusions become real locations: a Greek legend about the frozen rim of the world leads to the revelation that an entire section of the book actually took place there; the dream of a city of peace and riches resonates in the brutal conquest of the most magnificent city of Antiquity, and in a personal mission to gain entrance into a secret camp of ecowarriors, and in the eerie quietness of an aseptic self-contained city in the future. And each time, the perennial story can only survive if you leave that city of wonders, because "what really matters [...] is that the story gets passed on."

So pass it on.

Read Cloud Cuckoo Land and read it to each other and invite your audience to read it into the future.

Stranger, whoever you are, open this to find what will amaze you.