A genre-bending debut about finding safety, connection and space to create in the most challenging circumstances 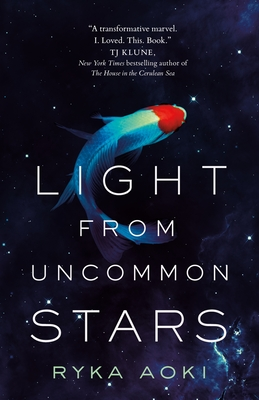 What does a book about a trans teen runaway trying to find safety in a world hostile to her existence, a book about a music virtuoso who sold their soul to the devil and is about to come to the end of their pact, and a book about alien refugees hiding among us as donut shop employees all have in common? Well, sometimes they have everything in common, because sometimes they are the same book, and on that note, let me introduce you to Ryka Aoki's Light From Uncommon Stars.

That trans teen runaway is Katrina Nguyen, who has left her abusive home and parents with nothing but the beloved violin that she can barely play. Katrina takes up an older queer friend's offer of a sofa to sleep on, only to find that said friend and his housemates are also abusive in a different way. Desperate and without anywhere else to go, Katrina finally gets a break when her violin practice (in a local part) comes to the attention of Shizuka Satomi, a notoriously selective violin teacher who only takes the best, though her pupils seem to both rise and fall with meteoric speed. Shizuka has just rejected the prodigy who everyone expected to become her seventh - and, to her, final - student. But something about Katrina - who is only doing basic exercises - captivates her, and she ends up offering Katrina both a place to stay and a formal violin teacher.

Unfortunately, as you might have gathered, Shizuka has a second agenda: after selling her own soul for talent and fame, she has renegotiated her debt from one soul to seven, and now she needs to find seven students who will make the same bargain as she did and are willing to accept the consequences. So far, she's justified luring six children into demonic pacts because they receive the benefits of fame and glory that they desperately want. But, from the outset, her relationship with Katrina seems to be on a different footing: here is a student who hasn't had any of the chances that her violinist peers take for granted, with the potential to outshine them all. What Shizuka offers, first and foremost, is safety. She doesn't understand Katrina's challenges or traumas, and she frequently fucks up when she makes assumptions about how the outside world will treat a non-passing trans teen girl, but she perseveres and spends a lot of time making Katrina feel comfortable and seen in a way that goes beyond bringing out her artistic talent. Shizuka's past is immensely problematic, and her conflicted intentions with Katrina equally so, but somehow through sheer force of characterisation, what could have been a predatory relationship becomes something much warmer, with far more room for mutual growth.

Rounding out the trio of protagonists is Shizuka's other chance encounter: this one with Lan Tran, donut shop owner and refugee starship captain (also, the ship is now the donut shop). Lan and her family are biding their time, using the onboard replicator to create donuts from the shop's original owners and trying to blend in to Californian life. Shizuka and Lan have an extremely adorable meet-cute over the need for a bathroom, and this quickly evolves into romantic feelings which are explored further over the course of the novel, through the many twists and turns of their lives. While Lan's story feels more peripheral to Katrina and Shizuka's dilemma, Aoki somehow weaves her intergalactic perspective, and the personalities and challenges of her children, into the fabric of the story in a way which just makes the whole blend work. (It also provides all the pieces for an excellent climax and a nice ending befitting the overall tone of the novel).

Now, I don't want to be out here still trying to make "hopepunk" happen when I think the genre community has decided it's not going to happen, but Light From Uncommon Stars seems to really fit what that genre tag is aiming for. It's a story where things are often bleak, and traumatic things happen (there is on-page rape,  multiple forms of abuse and transphobia, and a really unpleasant murder-disappearance involving some side characters) but the core relationships are about kindness and basic human (or alien) decency, and how people can try to uphold those values and carve out space for themselves to be. And that's a state that everyone deserves, whether you're an abuse survivor trying to catch a break or a parent worried about the decisions of your kids or even, maybe, someone who has got themselves into a sticky situation through past mistakes. Where Katrina and Lan and Shizuka - and many of the supporting characters - intersect is in learning how to move past survival and towards being able to create and share and be successful. It's a concept encapsulated in the descriptions of the Endplague, the catastrophic galactic event Lan and her family have run from, which is not a physical malady but something far more existential.

A little note on writing style. Aoki's style breaks scenes up into vignettes, putting in section breaks even when a scene carries on immediately afterwards with the same character, enforcing its emotional pauses and beats. It takes a bit of getting used to but it really underlines when something in a scene has changed the context or the world for the character experiencing it, forcing the audience pause with them as their reality adjusts itself and then pick back up where we left off. In other circumstances I could see myself finding this style difficult to get on with, but here it really, really works. I don't know why, but it's quirky and delightful without being intrusive, and something about it fits the style of Light From Uncommon Stars very well.

In short, this is a wonderfully quirky ensemble piece, with a character at its heart who deserves everything and is ultimately given... well, enough. Read it.

Penalties: - 1 Maybe a little bit too normalising of the woman who sold six children's souls to the devil