Microreview [Book]: Under the Whispering Door by T.J. Klune

Fans of The House in the Cerulean Sea are in for a treat that's both somewhat familiar in tone to what came before, but with more than enough deviations to feel fresh. 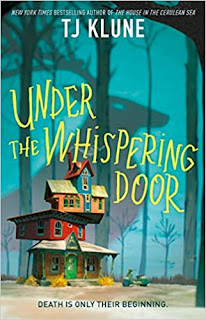 In Under the Whispering Door, the protagonist is dead almost from the novel's start. His body is buried, unable to scramble out of the ground. His life was not a life well lived. It was one of bitterness and heartless misdeeds. And now death has robbed his body of any opportunity for redemption. It's an image of hopelessness, of being tamped down by earthly forces out of your control without any recourse of getting out. But while his living body's journey is complete, he has a new one in ghostly form. That ghost, as it leaves his body, is a form of a second chance. Just because his life was a lost cause doesn't mean his death has to be, too.

Following Wallace's death, he is situated in a place where people with fantastical gifts, including Mei, a reaper, and Hugo, a ferryman, work to acclimate Wallace to his death with eventual plans of him transitioning to what lies beyond. His rehabilitation and preparation is done at a tea shop owned by Hugo. Warring with Wallace's protestations are feelings of affection beginning to form for those in the tea shop. Feelings that he never felt before, even when he was alive.

While the premise doesn't exactly break new ground in fantasy, the character interactions are where the novel is at its best. Whether its friendship between the protagonist and other the other ghosts he meets,  budding, believable romance that had its hooks in me until I was tensed and engaged, along with heartbreak and grief that is native to deathly situations--everything is handled with sincerity and emotional intelligence. The bits of wisdom might be parceled with a couple anodyne platitudes, but that adds to the cozy feeling that covers Under the Whispering Door like a warm blanket.

Don't go into the novel expecting rollicking, action-packed chapters. The roiling is more within the characters than pyrotechnic spectacles. The settings aren't varied, with most of the interactions confined to the tea shop--which sometimes have conversations extended to superfluity. But often it feels like a crucible for character growth with all the epiphanies, realizations, and disillusionments that comes with it. Just because the setting is relatively static doesn't mean that characters are taking steps of their own, even if they're metaphorical rather than literal.

Wallace might have been stuck in a rut in life, but in death the novel showcases him finding a pathway of ascending. In the year I'm writing this (2021), in which I am confined, often static, and sometimes pathless, Under the Whispering Door has come at a perfect time to offer a roadmap forward in literary form. Its pages might not be literal steps, but as the characters evolve internally, the novel's words made my heart warm and molded it into something sweeter, something that I think is more capable of approaching the world's clinical processes and rampant rage with more grace.

Bonuses: + 1 For having so much heart that even the grinchiest people will be moved. +1 For expertly vibrant banter.

Penalties: - 1 For a middle-third that is a little too slow and long.