'Dune: Part One' is pure visual perfection, but it doesn't stand on its own 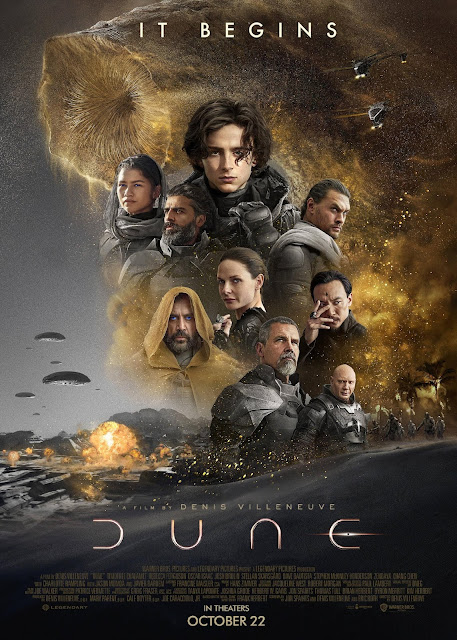 Dune: Part One is a work of beauty. Stunning, captivating, jaw-dropping beauty. You could turn the volume all the way down and just gape for the whole two-and-a-half hours at the impeccable use of lighting and contrast, the narrative meaning added by the camera angles, the precise geometric elegance of every single shot. This film is sure to snatch next year's technical awards. But that's the extent of its achievements. Dune: Part One is a glorious feast for the eyes, and for the eyes only. Storywise, it has several issues, and they stem from the choice to split the novel in two.

The beginning proceeds like your classic political drama: in a far future, in which humankind has apparently learned nothing from history and returned to feudal monarchy, the Emperor grows suspicious of an ascending noble house and schemes to destroy it. He decrees that the Atreides shall take over production of the universe's most expensive substance, which is not only as a metaphor for the role of oil in modern geopolitics, but also brings to mind the literal spice trade, which used to motivate greed and betrayal at a similar scale in older times. This move by the Emperor reeks of obvious duplicity, but the Atreides can't just refuse it without exposing the true positions of the game. So Duke Leto Atreides obeys and moves his household to the hostile planet Arrakis, where he knows for a fact that he'll be targeted, so he sets about making alliances with the local population.

Dune: Part One takes the story up to the usual point where a Greek tragedy would end: the Atreides are betrayed, their patriarch is captured, and his relatives are sent to deadly exile. But that's the point where the weird stuff blows up and Dune reveals the universe-spanning repercussions of its events.

Part Two has just been officially announced, which is welcome but not expected news. The deal between director Dennis Villeneuve and Warner Brothers stipulated that he would only get to make the sequel if the first movie did well enough. So the project was overshadowed with uncertainty from the start. It was not a fatal risk; if you're eager to know how Dune ends, you can always buy the book. However, at the time of release, Part One did not have a solid assurance of continuation. Instead of telling a reasonably complete story, Villeneuve preferred to tempt fate and make a majestic spectacle, rich in cinematic artistry, but made primarily of setup. From conception, Part One wasn't meant to be watched alone.

A movie adapted from a book series full of repeated warnings about the dangers of seeing into the future shouldn't have been so overtly plotted and structured on the assumption that a sequel would happen. Part One shows narrative choices that seem intended to help the story maintain better cohesion, but which clash against the hard fact that Part One is telling an incomplete story. Many of the trailer's suggestive shots of Paul Muad'Dib living and fighting next to the Fremen turn out to be flashforwards, prophetic hints of events that don't happen in this installment. There are so many of these tantalizing visions that at times it feels like we're watching a two-and-a-half-hour trailer for the actual plot of Dune.

By the moment reached at the end of this movie, readers of Dune have already been introduced to the Emperor, and to his scholar-minded daughter Irulan, and to Baron Harkonnen's other nephew Feyd, and to the powerful Spacer Guild. However, since their respective arcs don't go anywhere until the end of the book, they're completely absent from this adaptation. On one hand, removing them frees Part One to focus more on the protagonists it needs us to still remember and root for in Part Two. On the other hand, this silence on events beyond the House of Atreides makes the plot feel dangerously smaller than it actually is. Dune is not supposed to be mainly the story of Paul's family tragedy. It's supposed to be an epic of cosmic proportions. Multiple powerful factions have competing hidden agendas that are only now converging, which means that the story suffers by planting itself on one world and staying stuck there.

Both previous adaptations of Dune began with voiceover narration by the imperial princess and scholar Irulan. Because Villeneuve's version omits all scenes at the imperial court, there is no Irulan in this movie, which leads to a more interesting choice: voiceover narration by the Fremen warrior Chani, accompanied by a montage of Fremen guerrilla attacks on Harkonnen infrastructure. To place these images at the start of the story does much to counter the accusations of white saviorism often thrown at Dune: these Fremen were not sitting on their hands, waiting for Paul to come and save them. They were busy fighting for their own liberation.

This discussion is central to Dune fandom. A story as complex and as loaded with real-world symbolism as Dune is too easy to misread. The classic complaint is that it celebrates hero worship, which is easy to disprove by reading on. To put it bluntly, Paul becomes a murderous monster, and the sequel novels reinforce the original's message that nothing is more dangerous than a hero. What David Lynch failed to understand, and through him, audiences failed to see, is that Paul's arc in Dune is not a canonical hero's journey. If anything, it's a supervillain origin story. Paul is scared now, but in time, he will buy eagerly into his own legend, which will ultimately burn the universe. Even as early as Part One, the recurring visual reminders of his bullfighting grandfather cement the unspoken warning that a trait of the Atreides family is the tendency to court danger.

By focusing on Paul's misadventures in Arrakis, Part One skips most of the novel's philosophical and anthropological themes. That choice needs a serious course correction in the sequel. Dune is not Game of Thrones in space, nor should it ever try to be. One of the tasks that Part Two must fulfill is to present, in their full complexity, the heavy discussions on fate, ego, evangelization, exploitation, environmentalism, fanaticism and generational responsibility that made the original Dune the most acclaimed novel in the entire history of science fiction.

Fans need not worry that a more ponderous and cerebral Part Two will turn people off. Part One works well enough as an explosive adventure, but the whole reason why Dune is so respected and beloved is precisely because it is ponderous and cerebral. A less thrilling, more meditative sequel would do more justice to what makes Dune special. That sounds contrary to the direction Hollywood prefers to go these days, but now that we know for sure that Part Two is coming, Villeneuve can afford to jump deep into the thematic substance that sustains the story.

It sounds risky, but fans should not fear. Remember: fear is the mind-killer.

Penalties: −1 for overcorrecting the earlier Dune versions by giving too little exposition, −2 because the choice to not include the Emperor in this half of the story severely diminishes its sense of scope and makes the Arrakeen invasion feel like a rushed detour in pace, −3 for erasing the Middle Eastern influence on the source material.