The Expanse asks: Who is the future for? 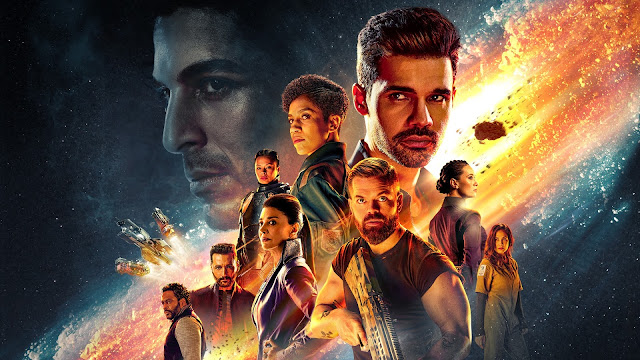 It reveals so much about the scope and ambition of The Expanse that the most bone-chilling line in this season isn't even "Having a front-row seat to the almost destruction of the universe tends to change you."

The Expanse is the delightful kind of science fiction that deals in ideas but never loses sight of how those ideas affect human lives. Since its first season, it's been telling the struggle of ordinary people to have a place in the universe while faceless institutions and organizations demand that they surrender their blood and sweat. In this imagined future, armies and companies still obsess over their power games with no care for individual casualties, and it's only when an extrasolar enemy is discovered that humans start to realize we're all equals before the cosmos.

This time, we're confronted with the terrorist mastermind Marco Inaros, self-proclaimed liberator of the asteroid belt and aspiring leader of the human journey to the stars. As we hear his grandiose speeches, where he proudly takes credit for throwing civilization-ending asteroids at Earth and blowing up the government of Mars, we're unnerved by the sinister mix of truth and delusion in what he says. It's undeniable that the inner worlds have exploited the Belters for decades, and that peaceful resolution has failed many times; it's only the path of devastation left by Inaros that prevents us from buying into his vision. There's a reason why the most bone-chilling line in this season isn't "Inner attention is measured by Belter corpses."

We're definitely going to need the spacefaring expertise and even the biological adaptations of the Belters if we want to become an interstellar civilization, but must we accept Inaros as the face of humanity that will represent us?

We better hope he's not. Inaros can't be the distillation of what it means to survive as a human in this universe. We need to be better than the roadmap he offers, because the most bone-chilling line in this season isn't even "I know he wouldn’t die for you, but he would let you die for him."

The Belters' grievances are justified. But what Inaros is doing is soulless revenge. That difference has got to mean something, and The Expanse has been carefully developing this theme for a long time. Back in season 3, the mysterious alien "protomolecule" opened the way to an extradimensional hub with gates to thousands of exoplanets, exposing the strategic balance of our solar system as the children's playground it was. Two seasons later, we're about to take the next giant leap for humankind. Are we mature enough to earn our place?

To tackle that question, season 5 takes its time to dwell on the nature of human relationships and the way extreme circumstances force us into less than ideal choices. And still, in spite of how heart-rending are the thorns of betrayal and disillusionment it's willing to explore, in spite of how deep it's willing to look into the abyss of human despair, the most bone-chilling line in this season isn't "The thing about civilization is it keeps you civil. Get rid of one, you can’t count on the other."

Indeed, nothing less than the character of our civilization is at stake. The discovery of exoplanets has caused massive emigration from the inner worlds. The great project to terraform Mars is now a question mark, and the asteroid belt is being outcompeted for mining jobs. No one knows who will win the deep space gold rush, but everyone wants in, and the pressure to claim a spot makes humanity retread its list of historical mistakes. Instead of cooperation, there's a free-for-all. Instead of unity, there's fanatic nationalism. Instead of understanding, there's mistrust. Instead of approaching the universe with humility and wonder, humanity is possessed by the same old tooth-and-claw ambition.

And still, the most bone-chilling line in this season isn't "You respect my claim, or you die and become a story I tell the next captain."

The reason I'm putting so many quotes here is that the quality of writing in The Expanse has jumped considerably, up from a past record that was already high. Characters' lines are economical and to the point, yet loaded with emotional meaning that only grows deeper once the viewer completes the season and has the full picture. There are skillful moments of foreshadowing, both verbal and visual, and not one establishing shot is wasted. Even if it didn't have the political maneuvers and the spaceship fights and the family drama and the questions over the future of our species, The Expanse would still be, on the sole merits of its technical production, a master class in effective storytelling. The whole spectrum of intrigue, suspense, romance, action, terror, drama and introspection is handled with breathtaking versatility.

So, a Belter, a Martian and an Earther walk into a bar.

No, that's no good. Let me try to better summarize the season.

A Belter, a Martian and an Earther walk into a trap.

Naomi, the Belter, purchases a spaceship that she hopes to gift to her estranged son to help him escape the manhunt that Earth is going to declare on Marco Inaros. Instead, she's forced to relive the pain of her broken family, and when her new family is threatened, she has to draw on every bit of her space smarts to prevent her ship from being used as a weapon.

The most bone-chilling line in this season isn't even "Walking away is the only choice anyone ever has."

Alex, the Martian, returns to his birth planet wishing to reconnect with a wife and son he hasn't seen in years, but what he finds is a home that doesn't need him, a military hierarchy that brands him as a stranger, and a world that is letting go of its dreams.

The most bone-chilling line in this season isn't even "You’re not a part of our lives anymore. We don’t owe you any closure."

Amos, the Earther, risks upsetting old acquaintances he isn't supposed to, because the recent death of the surrogate mother who lifted him from a life of senseless violence has moved him to pay forward the favor to a fellow lost soul. In the process, he realizes the fragility of his own conscience and his need for a human anchor.

The most bone-chilling line in this season isn't even "No one starts over, because no one really leaves anything behind."

These separate subplots merge into a race for survival and later into a vindication of the human spirit in direct defiance of the season's big villain. What Inaros represents, both in the fictional setting of the show and in the larger cultural conversation, is a version of guerrilla warfare that is deceptively appealing because it comes from legitimate pain, and the problem with pain is that over time it distorts one's perspective. I don't think I need to recount the ways real life has showed us the dangers of militant factionalism, but this season of The Expanse isn't afraid to cast an unblinking look straight into the absurdity of such a mindset. It's the kind of mirror into our dark impulses that we need from time to time in order to stay alert, to recognize the siren call of self-righteous brutality before it takes hold of us.

Marco Inaros is everything humanity needs to avoid becoming. And it's hard to express how much evil that is without asking you to just watch the entire show (which you should).

The most bone-chilling line in this season isn't "You must always have a knife in the darkness."

It isn't "We were already at war. You just couldn’t see it because they were killing us slow."

Not even "When someone is coming to kill me, the biggest mass murderer in history watching my back sounds pretty good."

The characters who say these lines sincerely mean them, but they don't quite convey the magnitude of the threat that Inaros represents. They don't cover how much harm he can do to the future.

Because the most bone-chilling line in season 5 of The Expanse is "Earth is the only source for live soil and complex biologicals."

Consider the ramifications of that little fact. Belter efforts to kickstart their own agriculture are still premature, yet Inaros is willing to keep throwing asteroids at Earth until its biosphere is rendered uninhabitable. He's not only a terrorist killer; he jeopardizes the food security of every human being if it will help him etch his name in posterity. That's the true extent of his evil.

It's to the show's credit that these stakes aren't stated explicitly. The screenwriters are content to let the horror dawn on us.

The Expanse knows it's a smart show, but it also trusts its audience to catch up. Its rigorous application of physics and its raw honesty in dealing with human psychology are honed in this season to a degree that feels impossible to match. Science fiction written for television has never been this excellent.

Baseline Assessment: 10/10. Mind-blowing. Life-changing. I could count bonuses for deep human drama and the most amazing visual effects achievable on a television budget, but they're not add-ons; they're part of the package. The bar for the genre has been raised far into space.