What Went Wrong With Wonder Woman 1984? 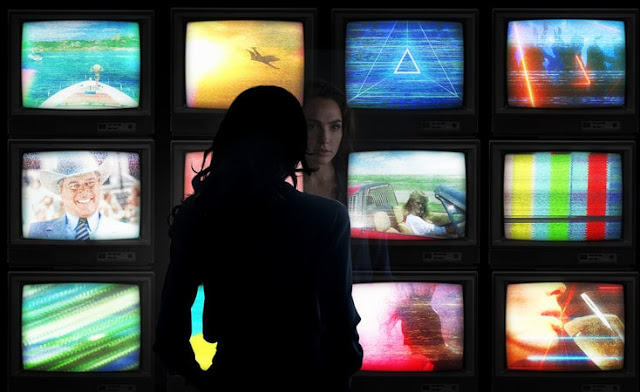 When we last saw Wonder Woman, in her first solo film, she was a caring protector of the desperate, on a mission to eradicate violence from the world. She learned that her classical standards of morality got more complex when applied to imperfect people in a modern setting, but it was from her contact with those people that she learned the true meaning of heroism.

In her sequel film, playing now on a laptop near you, she gleefully commits sexual abuse on a stranger without a second thought.

Fans are disappointed, to put it mildly. We wished for more Wonder Woman, and look what it cost us.

The choice to tell Wonder Woman’s story as a series of prequels runs into a storytelling roadblock. From the beginning, these films were burdened with the need to accommodate for Diana's turn into the loner we saw in 2016’s Batman v. Superman. This means that, no matter how much joy and light she brings into the world in her own films, she’ll always be fated to the depressing ending Zack Snyder set for her. We can hope for her next film to happen after Justice League, when she’s found a new reason for living, but for now, she’s caught in a trap made of bad plotting.

Warner Brothers has had serious difficulty figuring out how to use its iconic characters not named Batman. To illustrate this problem, there’s a scene near the end of BvS that I keep thinking back to. It’s a small moment, but it clarifies much of what feels so wrong yet so hard to articulate about the DCEU. It comes after the monster Doomsday is unleashed. When the news feed is interrupted, leaving the fate of Metropolis uncertain, Diana Prince resolves it’s time to end her isolation and join the fight. So she takes her luggage and exits the airplane she’s just boarded. A flight attendant notices her as she walks out and goes after her, obviously disconcerted by her behavior.

And here comes the moment, the crucial reveal of character. We get that this is a super-emergency and she’s in a hurry, but if this were the Lynda Carter incarnation of Wonder Woman, she’d show some empathy for the flight attendant whose job she’s disrupting and invent some silly excuse for her urgency to leave. This version, instead, simply keeps on her way. She doesn’t apologize for ignoring airline safety procedure, or spare a thought for the other passengers whose schedule she’s decided to inconvenience, or even acknowledge the existence of the concerned lady still calling out for her. This is a Zack Snyder protagonist, which means an Ayn Rand caricature of independence, and therefore the protests of puny mortals (let alone employees of the service industry) are beneath her notice. Perhaps the movie wants us to think she’s being cool or focused, but in this scene she’s just being needlessly rude.

Snyder’s detached and selfish portrayal of the superhuman has cast a long shadow over Patty Jenkins’ efforts to do justice to Wonder Woman, a heroine Snyder showed no hint of knowing was created to embody the female-coded virtues of compassion and openness. A single line of dialog during Clark Kent’s funeral ended up serving as a hobble around the development of the character who is supposed to be the heart of the Justice League.

So, after BvS, there was an expectation hanging in the air: 2017’s Wonder Woman was supposed to explain what horrible experience could have moved Diana to walk away from mankind. The answer turned out to be a mix of existential despair (humans didn’t abandon their violent tendencies even after she slayed the literal God of War) and heartache (Steve Trevor’s sacrifice).

And here we have another key moment, another reveal of character. Famously, Bruce Wayne’s reaction to personal tragedy was to protect the helpless so no one else would have to know the same pain. In the DCEU, Diana’s reaction to personal tragedy is to hide from other people and spend an entire century refusing to move on from a guy she knew for all of one week. So, kudos to the DCEU, I guess, for achieving the improbable feat of making Wonder Woman look more emotionally stunted than freaking Batman. Even now that we’ve collectively agreed to forget BvS, the bad choices Snyder made in that story (and, more generally, Warner Brothers’ bad choice of putting an Ayn Rand fan at the helm of a superhero franchise) continue to haunt Wonder Woman’s characterization.

That’s how we come to 2020’s Wonder Woman 1984. This sequel had a great opportunity on its hands: to undo the curse of grittiness that, through that one line of dialogue, had forced the inclusion of a defining calamity in Diana’s otherwise shining backstory. The excesses of the 1980s could have provided the perfect push for this withdrawn goddess to start enjoying the comforts of mundane life. Alas, to maintain continuity with the aloof Diana we saw by Clark’s grave, WW84 makes it very, very clear that she’s still very, very sad.

Even worse, the long jump from Steve’s death to his return necessitates that Diana stays emotionally stuck for all the intervening years. This doesn’t present our heroine in a good light, and it could have been easily avoided. In an alternate studio choice, the same plot of WW84 could have happened right after the first film, during the Roaring Twenties, and its parodic exploration of consumerism wouldn’t have lost any of its bite. As a bonus, we would’ve been spared the disturbing implication that Diana, an immortal goddess learned in classical wisdom, has been incapable of personal growth for decades.

In WW84, said growth comes with bitter tears, when she accepts (as must all adults unless they’re immortal gods or yuppies) that her wants are not paramount, that the cosmic forces of destiny don’t owe her a happy ending. This theme of exchanges and deserts is a recurring one, not only in this film (which keeps it true to its period setting), but across the DCEU. Martha Kent’s horrific line to Superman, “You don’t owe this world a thing” (the worst teaching you could impart on an aspiring hero, and especially false when applied to an alien refugee raised by human foster parents), finds an equally sinister echo in Queen Hippolyta’s warning to Diana, “They do not deserve you.”

Those statements are not metaphors. They deliberately use the language of bookkeeping, of literal debts and earnings. Both convey the same core idea, one firmly rooted in the greedy tradition of Ayn Rand: we have to earn the help we receive, and the mere experience of suffering doesn’t give us a right to be saved; if anything, we should kiss the feet of the supermen who deign to help us. In the Snyderverse, heroism is never a duty or a responsibility; victims have no inherent claim to the hero’s goodness. 2017’s Wonder Woman found the way out of this ethical dead end: heroism is an act of love, and love is not transactional.

In an attempt to further correct Snyder’s Rand-inspired error, WW84 has Steve explicitly assure Diana that the world does deserve her, but this revelation comes too late. Everything in the world of WW84 is transactional, especially love. Everything comes at a price. Donald Trump’s Maxwell Lord’s final redemption, in the form of a child’s love, comes after he’s already been defeated, after there are no longer any stakes to care about. It’s not this child’s love that saves the world, but a calculation of costs that convinces Maxwell to opt out of his devil’s bargain.

The value of unconditional love in a world of runaway greed is just one in the parade of fascinating ideas left regrettably underutilized in this film. Maxwell’s son wishes for him to be great, but Maxwell’s trajectory does not become noticeably different from that point on, so what changed? Barbara wishes to be like Diana, but since she doesn’t acquire her kindness or her morals, what does that say about Diana’s nature? If giving people what they want (for a price) is the basis of capitalism, what meaning should we read in Maxwell’s tactic of unsubtly suggesting to people what he wants them to want?

WW84 suggests these topics without devoting any time to give them their due consideration. However, one point that does get attention is Barbara’s rhetorical question during the midpoint infodump: “What’s more precious than what you wish for?” This is exactly the right question to pick as the key topic of the film. To this we get a clear answer: the thing that is more precious is what you already have and might lose. It’s right that this theme is handled as the central one, but then we get a whole speech about it, with a teary Diana preaching at the camera for three full minutes in case it’s not clear, because this time around we’re not punching our problems, dammit. There’s a creepy CEO to save.

What ultimately feels so strange about WW84 is that it tries to juggle too many balls. It’s a Cold War nuclear dystopia built atop a corporate corruption thriller built atop a fairy tale about wishes built atop a rags-to-riches morality play, and those types of stories operate by different rules. Where do they coincide?

In their 1972 book Anti-Oedipus, philosophers Gilles Deleuze and Félix Guattari propose the concept of a desiring machine to describe how contemporary society twists the process of desire until subjects are locked into systems that produce their own oppression. They claim, “no desiring machine can be built without demolishing entire social sectors.” When Maxwell seizes the Dreamstone and tells it, “I wish to transform this film’s subtext into text,” he becomes the literal desiring machine, the living incarnation of everything that can go wrong with capitalism, a remarkable development in a cinematic universe once ruled by Zack Snyder.

But the intended message gets lost under a sudden world war threat and a pointless detour to Egypt and Barbara’s quoting of Taxi Driver and an unexplored subplot about business’s unholy marriage with televangelism and Steve’s Quantum Leaping onto a poor stranger who’ll never suspect what was done with his body. Like little Diana in the opening scene, this story wants to cut short to its destination without actually going all the way. And like little Diana, it’s its own cheating that prevents it from scoring.

Baseline Assessment: 6/10 still enjoyable, but the flaws are hard to ignore.

Bonuses: +1 for Gal Gadot's wardrobe, a delightful nod to Lynda Carter's similarly stylish tenure. +1 for the pitch-perfect silliness of societal chaos, reminiscent of the Donner era of Superman. +1 for a smart questioning of the hidden costs of unbridled consumerism. +10 for that wonderful cameo.

Penalties: −1 for having Cheetah retread the exact same plot as Michelle Pfeiffer's Catwoman. −2 for leaving the main villain unpunished, actually rewarding him in the end, and shoehorning a backstory that makes him be the one in need of saving. −1 for insisting on the bizarre theme of "Diana gets strong when she loses Steve." −1 for having too much fun with the word "lame," which may have been common in the 1980s, but is recognized as definitely ableist in our era. −10 for turning a beloved feminist icon into a rapist.