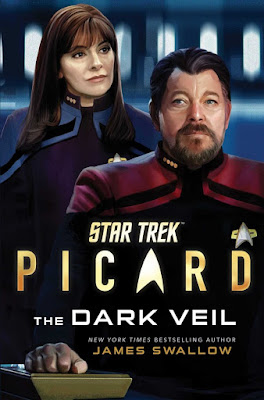 In a conventional story, the device called dramatic irony relies on the audience’s awareness of events that have occurred without the characters’ knowledge, but that they could learn about at any time. Prequels are different. They function under their own, unique type of dramatic irony: here the significance of the story is tinted by the audience’s awareness of events that haven’t yet occurred, and that the characters have no way of taking into account. The Star Trek: Picard tie-in novel The Dark Veil, by franchise veteran James Swallow, is set shortly before the explosion of the Romulan sun in the 2009 reboot film, so its plot is already overshadowed by what we know has to happen: the fall of the Romulan Empire, Spock’s disappearance into the past, the Federation's retreat into isolationism, and Thaddeus Troi-Riker’s death from a treatable disease. On its own, this novel is a thrilling spacefaring adventure, but when placed next to the 2009 film and the Picard series, it becomes tragedy.

The Dark Veil applies the same structure to itself: the first chapter is a cold open with Will Riker already awaiting trial in a Romulan cell, and the rest of the book is a prequel to that, narrating the six preceding days. On TV, Star Trek employed this technique countless times; on the page, it acquires a peculiar feel. The plot is weighed with the foreboding that, no matter how gloriously Riker saves the day, at some point things are going to turn really bad for him and he's going to end in Romulan hands.

On a larger scale, the franchise has fallen under a similar shadow: nothing that happens in the upcoming Strange New Worlds or Prodigy or season 2 of Picard or Lower Decks will prevent the Federation's catastrophic dismemberment established in season 3 of Discovery. From now on, every victory that our heroes earn in the 24th century is going to appear small and futile when considered from the future vantage point of the Burn. So, in view of the double dose of failure awaiting this timeline, it's a feat of talented writing that Swallow succeeds in making us care for a handful of Federation and Romulan characters trapped together in a small corner of the Neutral Zone over the span of a week.

The setup works like your standard Star Trek episode: members of an alien species, the Jazari, have asked the Starfleet spaceship Titan, commanded by Riker, to escort them on a trip back to their homeworld. The route takes them through the Neutral Zone, which attracts the attention of a Romulan warbird searching for candidate worlds to relocate their population before their sun explodes. When the Jazari ship malfunctions and a weird space phenomenon threatens to scorch everything within a radius of millions of kilometers, the Starfleet and Romulan ships are forced to cooperate.

Fortunately, a cosmic disaster is averted, and that's where your standard Star Trek episode would end. But then the Romulans become hostile toward the Jazari, and a deep exploration of the themes of trust and honesty and loyalty and truthfulness unfolds. I'm not going to spoil why the Romulans act in this way, but since we learn fairly soon that their spaceship has been infiltrated by a Zhat Vash agent, the reader can easily guess what's going on. This is more than an anomaly-of-the-week episode; this is a thought-provoking showcase of the questions that will be at stake during the timeline of Picard: the responsibility to give assistance to a former rival, the proper limits of the thirst for knowledge, the dangers of taking the self-preservation instinct to its extreme, and the unfairness of judging an entire civilization for the choices of its government.

A note at the start of the book informs us that this story occurs seven years after the Nemesis film and one year after the robot attack on Mars. In the reader's mind, this choice of temporal setting has the effect of summoning two ghosts who will haunt the plot from start to end. One is Data, who sacrificed himself in Nemesis and is still dearly remembered by his Enterprise crewmates. The other is Thaddeus, who is very much alive in this book, but whose future is known to the reader. These two deaths bookend The Dark Veil, forming between them a tight thread of what-ifs, of could-haves, of if-onlys. We are made to mourn in advance that the galaxy will never know Thaddeus's project of a universal language that would solve all misunderstandings, and we are made to regret that, if Data's goodness had been better known to the Federation authorities, maybe robot research wouldn't have been outlawed, and by implication, Thaddeus could have lived. One of the biggest storytelling merits of The Dark Veil is that it creates so much meaning outside of its textual content.

Within these signposts, the core conflict of the novel is the one that erupts between the Federation's ingrained urge to learn and the Romulans' ingrained urge to hide. Throughout the story, Starfleet characters complain that Romulans are so hard to decipher, so indirect in their meaning, so enigmatic, so elusive. In the first chapter, Riker's judge has difficulty even pronouncing the Federation's word for openness. At the same time, Romulan characters denounce the Federation for intruding, for kicking down the door where it's not wanted, for openly planning to spread its values to cultures that may have other priorities. Try as they may, these two factions just can't see each other. The title The Dark Veil alludes to this perspectival mismatch, this barrier of mutual incomprehension. For example, Riker views his involvement in the events of Nemesis as a heroic risk, necessary to safeguard peace in the galaxy, but the Romulans interpret the same actions as yet another opportunistic intervention.

The introduction of the Jazari provides a clever new angle to this standstill. Like Starfleet, they're on a mission of observation, but like the Romulans, they keep secrets of their own. Our Starfleet heroes sound less justified in their professed principles when they resent the Jazari both for covertly studying the Federation and for not letting themselves be studied. Little Thaddeus is upset that he can't write a school report on them, while a member of the notoriousy sociable El-Aurian species finds it shocking that she can't get them to make small talk. When a group of Jazari diplomats leave Riker's ship, he regrets not having learned more about them. The underlying sentiment is that the type of relationship the Federation prefers to have with other cultures is to know them, and problems only arise when they refuse to be knowable.

If you describe this situation to your anthropologist friends, they’ll instantly catch what the problem is with the Federation’s attitude. Sometimes a culture chooses to protect certain practices and beliefs, and in the real world, problems arise when the dominant culture assumes it’s entitled to know. As it turns out, the Jazari have a perfectly valid reason to not disclose certain facts about their species.

Compare this with how the Federation deals with Romulans. During a patrol of the Neutral Zone, Riker discusses a warbird that neglected to cloak for a moment, which he finds a suspicious break from character. It’s not like the Romulans to show themselves; when they do, they’re planning something. Riker describes both parties’ presence in the Neutral Zone as a “watching us, watching them, watching us” situation. If mystery is the weapon of choice among Romulans, knowledge is the Federation’s.

Swallow plays with this anxiety by making the Jazari carefully preempt such conflict. One character's conclusion about them is, "They're distant, but they're just so pleasant about it." Unlike so many other Star Trek aliens of the week, the Jazari get to keep their peculiar ways by taking away the excuse for conflict.

To put it in less abstract terms, let me quote motivational speaker Wayne Dyer, who defined anger as the inner monologue, “If only you were more like me.” That little sentence sums up the Federation’s foreign policy through the entire run of the franchise. A straight line runs from “If only you were more like me” to “How can they live like that?,” an overused sentence with an ugly colonialist baggage that Riker actually utters in this novel. It’s a judgmental, invasive approach that the Romulans take offense to and the Jazari politely disregard. Both drive Riker mad with frustration, and give the faction he represents a worthy foil to be challenged by.

This could almost not have been a Picard tie-in. For one thing, there's very little of the man Picard in it. It could easily have been marketed as a sequel to Nemesis. But in its questioning of the Federation's newfound defensiveness, in recognizing the ways it has failed to earn its neighbors' goodwill, the book is a perfect fit with the themes of the Picard series.

The Dark Veil interweaves personal fates with interstellar politics in the Star Trek manner we know and love. It has a gradual buildup that rewards the reader with acute debates and character moments that feel on point. As a companion to the show, it's the rare ride where the bumps are the best part.

Baseline Assessment: 7/10 an enjoyable experience, but not without its flaws.

Bonuses: +1 for an honest portrayal of the difficulties of establishing peaceful relations even between willing parties, +1 for the skill with which it made me fear for Thaddeus, even when I already knew from Picard that this is not the point in time when he dies, +1 for a final battle that brings original excitement to the franchise's half-century-old formula of throwing spaceships at each other.

Penalties: −1 for piling up a surprising amount of racial essentialism about Romulans within the first scene of the book, −1 because the secret of the Jazari was obvious way before the big reveal.

Nerd Coefficient: 8/10 well worth your time and attention.