A relatively light and fun multiversal adventure featuring a protagonist who switches worlds every time he closes his eyes. 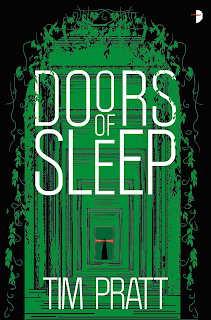 If you followed me for a while and followed my journey as a reader, and read these reviews here and elsewhere, you probably know that multiverse stories are the first and more power chord in my love of science fiction. Way back in the day, the Chronicles of Amber by Roger Zelazny forever imprinted on me a love and an enthusiasm for multiple world stories, where one might walk into another world. Like Portal fantasies, though, they fell out of fashion for a good long time, but have slowly started coming back. Not all such books have worked for me (see my review of the late Mike Resnick’s two Dreamscape novels here at NOAF  but it is something I am always going to be interested in and going to peak my interest.

Enter Tim Pratt’s Doors of Sleep. Zaxony Delatree has a problem, a rather big problem. Every time he falls asleep, every single time, he wakes up in a new and different world. This leads to a continued set of opportunities and challenges, since he can’t stay in a place very long, even with drugs and the like, and of course he has absolutely no control over what the next world is going to have, for good or ill. Unlike Amber or the Dreamscape novels, and like Doctor Who, this book is definitely science fiction, not fantasy and has a science fiction viewpoint, as Zax interrogates the nature of his affliction and its potential origins, throughout the book.

Fortunately, for the book and for Zax, he does not have to travel alone. It emerges that having someone in his embrace, Zax has been able to bring other people along with him on his journeys. This has not gone well in the past. The love of his life went mad when he attempted this while she was awake, the cosmic horror of the translation between worlds broke her mind. Another long time Companion (and I use that word in the Doctor Who sense of the world, since Doctor Who, as you will see is a useful touchstone) decided that he wanted to vivisect Zax to learn more about his ability..  While Zax is a diplomat and peacemaker, allowing his erstwhile companion Lector to do this to him is a bit much and he abandoned Lector, expecting to never see him again.

Now, worlds later, Zax makes a new friend, a biologist with an uncanny ability to use her own body as a laboratory, but Lector has indeed found a way to travel worlds. He wants Zax, of course, but he wants more. He has an even greater plan, one only Zax and his friends could possibly stop. This is the matter of Doors of Sleep: A light world hopping chase as Zax tries to keep ahead of Lector, both in terms of world, and to oppose his ultimate plans.

Although the text does speculate on why Zax doesn’t wind up in worlds that will immediately kill him, there is a bit of handwavium lightness about the entire proceeding in how Zax travels from world to world. It may indeed be something as unrevealed about the nature of his travel, but if he travels while he is sleeping, statistically, after a thousand worlds, one might think that a deadly accident would have befallen him before he ever woke up on some world. But this is not that kind of novel, even if there is a Master-level villain running around with grandiose plans, the stakes and tone DO feel more like Doctor Who than a gritty Moorcockian fate oif the multiverse, and by a long way. And that is good, a relatively light and fresh take on the subgenre, is, sometimes, very frankly welcome.

Zax himself as a character is a relatively placid, straightforward diplomat of a character, who uses his skills at diplomacy, negotiation and social graces to make his way across the worlds. Some of the aforementioned lightness is addressed--why Zax can communicate with the people of various worlds is chalked up to a gift from Lector, prior to their falling out. It’s about as well described as the translation circuits of a Tardis and it really just is there for consistency’s sake. Zax himself has the experience of dealing with a lot of worlds, but unlike the Doctor, he is not hypercompetent. His companions, however, (and counting Lector as a former companion) outshine him, I think, in personality as well as skills and abilities. Minna, whom he meets early in the novel, has inventive skills with her biology that prove useful time and again throughout the novel, and predictably, once Lector finds out about her, she becomes a target for him as well. Vickie is a non-human companion, and with her intelligence and ability at analysis, proves crucial in aiding Zax as well.

But Lector is the real star of the book in many ways. Yes, the book is in a mostly tight third person viewpoint from Zax, detailing his adventures in a journal. This gets broken in a couple of cases, when a clever bit gives us some crucial information from Minna’s point of view. But it is Lector who leaps off of the page, like any good villain. He starts off distantly as a threat that Zax survived and as far as he knew, dealt with (and Zax, diplomat he was, feels bad that he dealt with Lector so harshly). But as he becomes the dominant threat of the novel, the demon, as it were, always five steps behind Zax, he really takes on a life of his own. His ambitions and desires are twisted, psychotic, a complete reversal of what Zax stands for, but they make sense, and he is a delight for the reader to encounter. It’s a real Master- Doctor energy that comes off of the page between Lecto and Zax. His ultimate plot, too, is about on the level of feasibility as the the schemes of the Master, too. I kept wanting to hear Lector’s voice as Anthony Ainsley’s. (I suspect an audio version of this book would not work entirely well for me on a re-read).

Being a story about jumping multiverses and worlds, the various universes, or at least the small bits we see of each one, come alive in the descriptions and sensory detail. Pratt has a skilled way with description and evocation of the various places they stop, be it for a couple of days, or it just flashing by as Zax and company leap from world to world, trying to deal with the imminent threat of Lector. Pratt’s words pack enough punch that every world, even the ones they quickly leave because they are not conducive to their quest, implies a whole universe that we can never get to. The mechanism of Zax world shifting with every sleep means that any time in a particular world is going to be necessarily limited. The worlds most tied to the plot and characters--Minna’s world, Zax’s home world (described, not seen, as the novel starts, he has been traveling for quite a while), and again, in flashback, Lector’s world, all get the most play.

In the end, I enjoyed the novel, although it sorely needed an off ramp. Instead the novel ends with a WHAM moment, a cliffhanger if you will. It does reframe and make one reconsider a number of past events in the novel, as well as the worldbuilding and superstructure of the universe (something, as mentioned above, debated throughout the book). I am on board for more adventures of Zax, but want to make clear that readers who just want one book and no more are going to be frustrated by the ending

Bonuses : +1 for excellent multiversal shenangians;+1 for a relatively light and entertainingly fresh and gentle take on the subgenre

Penalties: -1 The lack of an offramp at the end of the book will frustrate readers wanting to one and done.