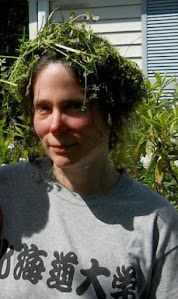 I was first introduced to Francesca Forrest's work back in 2014 when I read her novel Pen Pal.  The imagery in the novel, and the fragile safety the characters experienced, it stuck with me.  When Forrest's novella The Inconvenient God came out in 2018, I gobbled it up. You can only imagine my joy when I learned last year, that she was publishing a new short novel, Lagoonfire. For months, I had to try to figure out "what in heck is lagoonfire, and what could it possibly have to do with The Inconvenient God??". Lagoonfire comes out on March 3 from Annorlunda Books, and trust me, it's all connected!
Lagoonfire tells the story of dying gods, rewritten histories, a government official who prefers to stay nameless, and the childhood she wishes she could forget.  Forrest presents an epic story that is concisely told through kindness and compassion as the characters walk through a world that insists on crushing their history.  Nearly everyone in this book is so kind and helpful, it's easy to forget that it's a story about forced assimilation and the destruction of cultures.  If you're interested in how a story becomes a legend becomes mythology becomes a paragraph in a children's history book becomes forgotten, Forrest's Polity stories are for you.
Beyond her novels and novellas, Forrest's short fiction has appeared in Fireside Fiction, Strange Horizons, Not One of Us, and various print and online anthologies.  You can learn more about her work by following her on twitter at @morinotsuma or reading her blog, asakiyume.dreamwidth.org.   She was kind enough to put up with my fan-girling and answer my endless questions about Lagoonfire.
Let's get to the interview!
NOAF: Lagoonfire is the sequel to your 2018 novella The Inconvenient God. When did you decide that The Inconvenient God needed a sequel, and do you have more plans to write in this world?
Francesca Forrest: I always knew there was more I wanted to share—in fact, when I wrote The Inconvenient God, I had to force myself to focus on the one story at hand because my mind kept on jumping to all the other things that were popping into my head about the Polity, the Ministry of Divinities, the gods themselves, and Sweeting and her story. And yes, I do intend to write more! I’m working on something now that—if I can keep all the balls in the air—continues with a lot of the threads brought up in Lagoonfire. And then I have some ideas even for a story beyond that, but I don’t want to get too ahead of myself.
NOAF: What were some of your inspirations for Lagoonfire? What were you thinking about while you were writing it?
FF: In The Inconvenient God, Sweeting makes a remark to the god she’s trying to decommission about how many gods enjoy their retirement as mortals, and that got me thinking that I wanted to see some of those gods in retirement—so that was the first inspiration. And also in The Inconvenient God, I’d set up that Sweeting grew up in the Sweet Harbor district of the capital, and I felt like I wanted to explore that. But in addition, I’d been reading a lot for my day job about how the Chinese government exerts control over local officials—and I was working with Chinese academics in Hong Kong—so issues of control and repression were on my mind. And not just overseas: I was thinking about those things here, too. Also I had a six-month job teaching in a jail that gave me really visceral personal experience of being in a jail, so that played into it too. 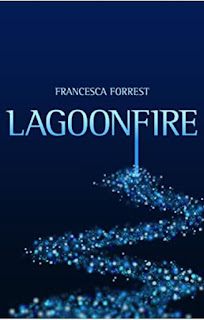 NOAF: An overarching concept in this world is that the governing body, The Polity, has given specific agents the power to decommission deities – to un-deify them and make them mortal. These humans have more power than the gods they are sent to decommission. The more I think about this, the larger and heavier and scarier this idea becomes, that humans have the power to stop a god from being a god. Where did you come up with this idea?
FF: That’s a big question! The most basic answer is that it comes down to power—the power behind the decommissioning force has to be greater than the power behind the deity. The Ministry of Divinities can vest a decommissioner with the power of the whole Polity—though there’s only so much power a single individual can channel, which is why some jobs take more than one decommissioner. The Ministry doesn’t have the power to brute-force decommission a god that has a healthy worship base (though it could, for instance, brute-force decommission a god with only a tiny following). When it’s working as it should, the Ministry only decommissions gods and goddesses who have already fallen out of human favor and who aren’t very active. But what bureaucracies operate only as they should? Establishing Abstractions has all sorts of troubling implications, though it has benefits for some. That’s something that I’m going to get into in the next story.
All of this is to say that the deities of the Polity are small-g gods and goddesses (and nonbinary divinities), with an interdependent relationship with human beings. They get their spark of divinity from human beings. Obviously this isn’t the only way to conceive of gods, and even in faith systems where gods operate like this, larger (divine) forces that aren’t subject human control are also often posited. That’s something I haven’t touched on yet, but it’s something in my mind. The Polity is only one state in this world. There are other states and cultures, some of which have very different conceptions of divinity, and those may feature in future stories.
NOAF: And what do the people who live in this world think of this? That one day, their local god who their family has prayed to for centuries. . . might not be a god anymore?
FF: Exactly as we would! Depending on our place in society, we’re more or less likely to feel like we’ll be screwed by our government, and that’s how they feel too. People who feel well supported by the state trust it to do the right thing and don’t fear that it would get rid of their beloved deities. Those in more marginal positions have more doubts. 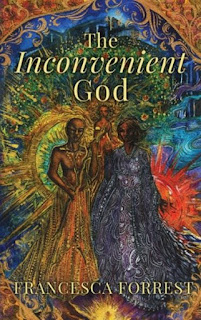 NOAF: I don't want you to give any spoilers about Decommissioner Thirty-Seven's childhood, or who her family is, but can you tell us about your writing process, for how you came up with her character and her background?
I knew from the last book that she had been brought up by her grandparents, but I didn’t know why. I also knew she was super buttoned down and into self-control. Why? Why were her parents out of the picture? Why is she so dedicated to her work and so withdrawn from ordinary life? The answer came to me pretty quickly, but what was wild was how it ended up weaving into the story of the retired gods—I hadn’t planned that, but as I was writing I suddenly saw it.
NOAF: What is your writing process like? You cram so much story into so few pages, how do you do it? How do you choose what world-building paragraphs and exposition stays, and what gets edited out?
FF: My writing process is so, so slow. I spend an awful lot of time daydreaming, playing with details, chasing up research questions, wool gathering. And even when I actually have fingers on the keyboard, I hesitate endlessly over word choices, etc. Some people are able to write vigorously, fast—and then (I presume) they go back and edit and tidy it all up. I’m editing word by word, it feels like … I don’t think it’s a great system, but it’s the one I’m stuck with, apparently. As for what stays and what goes, I try to keep the focus on the main story but provide enough sense of place and context that the world feels deep and wide and like you know there are a thousand other interesting stories in there that could be told. (… Like our real world.)
NOAF: Who are some of your favorite writers? How has their work inspired you, if at all?
FF: My childhood faves were some of the usual suspects—C.S. Lewis, Lloyd Alexander, Tolkien, Madeleine L’Engle. Zilpha Keatley Snyder was also big for me. Present-day writers, wow, there are just so many. Like most of the SFF world, I’ve been enjoying Martha Wells’s Murderbot books. I adored Claire Cooney’s The Twice-Drowned Saint. That story has a truly wonderful portrayal of a god coming into being. I really liked Ann Leckie’s conception of gods in The Raven Tower, too. Moving from gods to ancestors, I really loved how ancestors were present for the protagonist in the novelette The Epic of Sakina, by Shari Paul (it ran in FIYAH magazine). That story had amazing worldbuilding, too.
For character development and also for meaty discussions—and for humor—I enjoy Aster Glenn Gray’s books—Briarley and Honeytrap are her best known. Sherwood Smith is another writer whose character development I admire to pieces.
These writers and others inspire me by showing me what’s possible. I’m inspired when I see a writer or a work that take risks—with language, with structure, with ideas. Like what Amal El-Mohtar and Max Gladstone did with This Is How You Lose The Time War did. Everything ventured, everything gained!
NOAF: Thank you so much!  I can't wait for the world to get to read Lagoonfire!
POSTED BY: Andrea Johnson lives in Michigan with her husband and too many books. She can be found on twitter, @redhead5318 , where she posts about books, food, and assorted nerdery.
Posted by Andrea Johnson at 12:00:00 AM