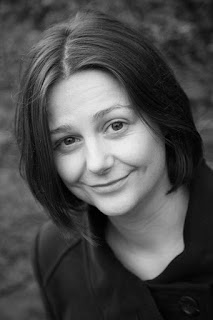 Aliya Whiteley writes across many different genres and lengths. Her first published full-length novels, Three Things About Me and Light Reading, were comic crime adventures. Her 2014 SF-horror novella The Beauty was shortlisted for the James Tiptree and Shirley Jackson awards. The following historical-SF novella, The Arrival of Missives, was a finalist for the Campbell Memorial Award, and her noir novel The Loosening Skin was shortlisted for the Arthur C Clarke Award.

She has written over one hundred published short stories that have appeared in Interzone, Beneath Ceaseless Skies, Black Static, Strange Horizons, The Dark, McSweeney’s Internet Tendency and The Guardian, as well as in anthologies such as Unsung Stories’ 2084 and Lonely Planet’s Better than Fiction.

She also writes a regular non-fiction column for Interzone.

Today she tells us about her Six Books!

I’m nearing the end of Emmanuel Carrère’s biography of Philip K. Dick. It’s called I Am Alive and You Are Dead, and at times it’s really playful with style, throwing in questions and puzzles, breaking up sections at odd points to ruminate on inspiration and religion. The author often sinks himself into what he imagines Dick would have felt as he wrote his novels, which makes me feel both intrigued and uncomfortable. How could you possibly have come up with that? I find myself asking of both the biographer and the subject – and: Who’s in control here? Both of which strike me as very pertinent questions to be asking when it comes to the life of Philip K. Dick.
2. What upcoming book you are really excited about?

I’m keen to read Kylie Whitehead’s Absorbed. It will be published in May by the imprint New Ruins, which is a collaboration between Dead Ink and Influx Press exploring the places where genre and literary fiction meet. Absorbed is described as a ‘darkly comic story of female insecurity, body horror and modern relationships.’ Sounds exactly like my kind of thing.
3. Is there a book you're currently itching to re-read?

I have a very vague order to my bookshelf, and that includes a few shelves set aside for my absolute favourites. Some strange books sit next to each other there, and I always enjoy that jumble of genres: the real-life crime next to the fantasy epic, the SF graphic novel next to the travelogue. What I’ll do to answer this question is run upstairs, take a look at those shelves, and come back and report on which book is calling to me right now. Here goes –
Right, I’m back.
The winner was Rebecca West’s The Return of the Soldier. Here’s what I remember about it: I first read it as part of a book club, and a lot of the members were lukewarm about it, or didn’t finish it. I know I really loved it. From what I recall, it has a darkness to it, and an honesty. It’s about a shell-shocked Captain returning from the trenches of World War I to be nursed back to health by his female relatives. And that’s pretty much all I remember, along with the fact that parts of it were an influence on my own post WWI novella (The Arrival of Missives), so now I need to give it a re-read and remind myself of why it gets a place on those shelves.
4. How about a book you've changed your mind about over time--either positively or negatively?

Your question has made me realise that it’s really rare for me to change my opinion on a book! I tend to stick to my first impression. Or maybe it’s more accurate to say that I can’t overcome that impression, no matter how unfair it might be. Some part of the initial emotion always sticks with me. But I have learned to appreciate some books, even though I really didn’t enjoy them on first reading, usually for a reason that’s entirely my own fault. For instance, I was given the complete works of Jane Austen when I was far too young to be interested in it (a pre-teenager, maybe?) and I tried reading Emma and hated it. Hated the language, hated the heroine. I didn’t approach Austen again for decades. Then I watched a film adaptation and it came to me – this is so much more than I found in it. So I re-read the novel, and I re-evaluated it and now I know why so many people love Emma, but I still see the shadow of pre-teen me on the page. I can’t get over my initial response, which is a shame.
5. What's one book, which you read as a child or young adult, that has had a lasting influence on your writing?

I think a lot about Ursula K. Le Guin’s The Tombs of Atuan, and the feelings of it – of being trapped, of being freed, of searching for truth and reality – are things that come up a lot for me when I write. It’s one of the few books that I finished on first reading, turned from the last page to the first, and started again.
6. And speaking of that, what's *your* latest book, and why is it awesome?

It’s The Loosening Skin, which is getting published in the US at the end of February 2021. It’s been available in the UK for a few years now, but the US version has some bonus material and a very cool cover, thanks to Titan Books. It’s set in a version of our world in which human beings have always moulted. They lose their skins every seven years, and with that they lose the deepest emotions, such as love, so no relationship ever lasts. Nothing is forever, and that’s accepted.
The book starts at the shedding of the skin of a bodyguard called Rose Allington. With that painful loss comes the end of her relationship with her client and lover. And the first half of the book deals with how she moves on from that only to get dragged back into his orbit when a horrible crime is committed. The second half of the book goes off in a different direction entirely, because, hey, in this world nothing lasts forever. Not even a crime/SF crossover plot.
It’s awesome because I got to explore some huge ideas, and to tie the shape of the book into those ideas too. That’s something I’m really interested in. I hope it finds some new readers, and thanks for giving me an opportunity to mention it today.
Thanks Aliya!
---
POSTED BY: Paul Weimer. Ubiquitous in Shadow, but I’m just this guy, you know? @princejvstin.
Posted by Paul Weimer at 12:00:00 AM