Microreview [book]: The Gilded Ones by Namina Forna

Full of fun, YA tropes, The Gilded Ones explores a violent world where friendship is a matter of survival. 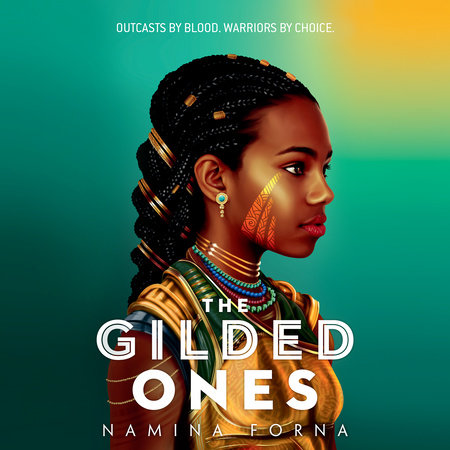 One aspect of what makes The Gilded Ones a fun read is Namina Forna's control YA tropes. The novel opens with a common beginning: the protagonist Deka must go through a ceremony to find her place in the town. Of course, Deka isn't normal, and Forna drags the reader into the horrors of what happens when a young woman's body is not considered her own. While I would hesitate to call this book grimdark, it's definitely not shying away from the realities of a violent, patriarchal system.

Because Deka does not bleed red, but rather gold, she is outcast from her town and collected to be part of the king's army to fight deathshrieks--large, hulking monsters that can kill with the sound of their screams. Girls who bleed gold have heightened senses, strength, and are very hard to kill, which was why until recently, the king had ordered them put to death rather than utilized in his army. Now, they train with young men their age, jatu, in order to campaign against a massive deathshriek army gathering at the edge of the emperor's land.

Enter Keita, a young lord turned jatu warrior who is partnered with Deka. While the other girls are friendly with their jatu partners, Keita and Deka connect more deeply over their shared horrors: Deka, being tortured by her family and elders for bleeding gold, and Keita for the massacre of his family by deathshrieks. Once again, Forna demonstrates her control of the warrior-lover trope that so often appears in YA, but I appreciated that Keita was not just shown to be a great warrior--since all the characters are--but rather it's his ability to empathize with Deka and the other girls that forms their bond. Of course, there is more to Deka and the deathshrieks than we are first led to believe...

Much of the emotional heart of this book is Deka and her friends coming into their strength as women warriors. As Deka says: "Our whole lives, we've been taught to make ourselves smaller, weaker than men. That's what the Infinite Wisdoms teach--that being a girl means perpetual submission (149). Ultimately, this is a feminist novel. It takes particular issue with faith-based patriarchies.

Even though Deka can save lives with her powers, she's considered a demon and learns to take pride in that. "Are we girls, or are we demons?" (150). As a rallying cry, I related to this a lot, even as reader beyond the age group. I know I would have loved this novel as a sixteen-year-old trying to escape a misogynistic religious community. That said, the imagery of golden blood and bleeding together enforces the gender binary present throughout the book (other than one brief mention of a lesbian character). While it's obvious that the US (and other countries) has yet to escape a patriarchal and misogynistic past, I'm not sure that creating a world that is so binary is entirely useful, either. That being said, this is a series, and I have a feeling that since so much of this book was about shaking off male oppression that the binary might be broken in book two.

Ultimately, this book takes some favorite YA tropes and turns smashing the patriarchy into a rich, fantasy adventure. Even though this book is fun, there's a lot of pain and the realities of what it means when a young girl has no choice over her body. This violence is made clear on the page. While being reminded of the current horrors of patriarchy that many of us still experience isn't for every reader, I do think Forna's realism demonstrates the difficulty and necessity of smashing the patriarchy.

Penalties: -1 a little too limited in terms of worldbuilding

POSTED BY: Phoebe Wagner is a PhD candidate at University of Nevada, Reno. When not writing or reading, she can be found kayaking at the nearest lake. Follow her at phoebe-wagner.com or on Twitter @pheebs_w.