Today we welcome our second new contributor of 2021, Elisabeth R. Moore! Elisabeth is a short fiction writer. She and her wife live in the Ruhrgebiet in Germany, where Moore is in grad school for English and German literature, with a focus on climate fiction. Her writing deals with the natural world in all its glory, the ghosts we hide from and queer women. She loves to listen to audiobooks while crocheting, wandering the local forests with her dog, and experimenting with sourdough baking. She tweets at @willowcabins and can be found at spacelesbian.zone 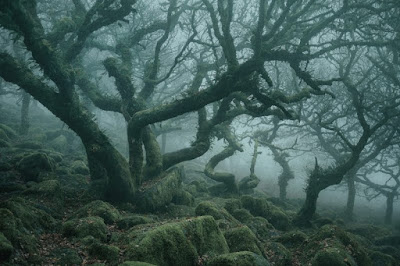 NAME: Elisabeth R MooreSECRET UNDISCLOSED LOCATION: I live in Essen, Germany. If you've ever been to Germany and thought to yourself "wow, what a beautiful country," then you've definitely never been in the Ruhrpott. It's the ex-industrial heartland of Germany, so we have mines, rivers, and urban sprawl.  As a result, I like to think my secret undisclosed location is deep within the flooded mines under my city, hanging out with the mermaids, discussing our plans for unionization.NERD SPECIALIZATION(S): I'm an English Literature grad student, so I'm embarrassed to say my speciality is "thinking about books That Way." Also fiction staring, involving, or even hinting at queer women. MY PET PEEVES IN NERD-DOM ARE: Hierarchies! No one is inherently better than anyone else for liking or disliking a piece of media, and yes, I'm including the Star Wars prequels in that statement. Also, the idea that analysis is somehow "ruining" a piece of media. Sorry, it's not!VAMPIRES, WEREWOLVES, ZOMBIES, ALIENS OR ROBOTS: Wow what breadth! But I think for me the answer is always going to be robots. I'd rather be a cyborg than a goddess!RIGHT NOW I'M READING: I just finished reading the gothic novel The Animals at Lockwood Manor by Jane Healey. It's spooky, atmospheric, and gay, so I had a great time....AND A COUPLE BOOKS I RECENTLY FINISHED ARE: A Children's Bible by Lydia Millet (excellent near future climate change novel) and The Southern Book Club's Guide to Slaying Vampires by Grady Hendrix (amazing amazing horror).
NEXT TWO ON QUEUE ARE: Vesper Flights by Helen Macdonald (I love birds!!! so much!!!) and The Queen of Attolia by Megan Whalen Turner (I started this series in January and was like ?!?!?!?! how have I been missing this amazing art work so now I'm furiously catching up).
WHEN THE WEATHER SUCKS OUTSIDE I'M MOST LIKELY TO BE... curled up on the sofa with a good audiobook, crocheting. Though as a German, I strongly subscribe to the rule "there is no such thing as bad weather, only bad clothing," so bad weather rarely disrupts my plans.
MY FAVORITE SUPERHERO AND SUPER-VILLAIN ARE: Hero? Huntress. Villain? Poison Ivy.
IF I WERE A SUPERHERO/VILLAIN, MY POWER WOULD BE: Silencing people. So making their voices disappear? THE BEST COMIC FILM OF THE PAST 5 YEARS IS: Sorry to give the Gay Answer(TM) but Thor: Ragnarok. THE WORST COMIC FILM OF THE PAST 5 YEARS IS: Wonder Woman 1984.I JUST WATCHED Orphan Black AND IT WAS AWESOME:
I JUST WATCHED Wonder Woman 1984 AND IT WAS TERRIBLE. (Look I paid 23 dollars for the HBOMax streaming service only to watch this movie on Christmas Day so SORRY IT'S GETTING DRAGGED TWICE HERE BUT IT DESERVES IT).
EVERYONE SHOULD SEE Warehouse 13 BEFORE IT'S TOO LATE,
BEST SCIENCE/SPECULATIVE FICTION SHOW OF THE PAST 10 YEARS: Person of Interest, no competition.
NAME A BOOK  YOU *NEED* A MOVIE OF (OR VICE VERSA): Empress of Forever by Max Gladstone. It's the dramatique space opera of my dreams!!!
Posted by Adri Joy at 12:00:00 AM