Space Sweepers looks gorgeous... and that's about it 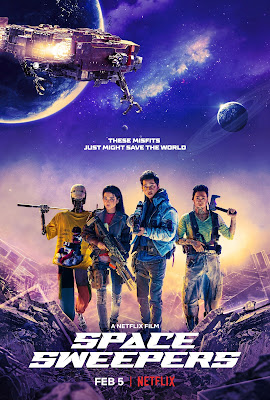 This movie lost me before I was five minutes in. Our protagonist, Kim Tae-ho, has boarded the space elevator to his job as an orbital debris retriever, and when the trip takes him out of Earth's atmosphere, we see a floating pen. It's just... there, for no reason.

"Did you see that? Get it? GET IT?" the movie seems to scream in your face. Yes, we saw 2001. Yes, we recognize the cultural significance of the floating pen. But in 2001, the floating pen was used to illustrate a key theme of the story. In Space Sweepers, it's a gesture devoid of context, a cheap tug at the strings of nostalgia. And it's a physical impossibility in a vehicle undergoing acceleration. There is zero reason for that scene to contain a floating pen other than to wink at the audience, and that little instant breaks any trust we could have in the movie's sincerity.

And that's before it starts throwing Wall-E, Firefly, Elysium, Cowboy Bebop and Gattaca into a blender.

The plot takes a while to start, but eventually we follow Tae-ho in his quest to hide a thermonuclear bomb, which he and his crewmates found by chance, until they can sell it to a terrorist group because they wouldn't make any money by giving it to the authorities. His money problems are made very clear to the audience, multiple times, to the point of melodrama, and we know he can't just report the bomb because this government's untrustworthiness is on the comical side of Kafka.

Also, the bomb is a sentient robot in the shape of an adorable little girl that his crewmates are growing fond of.

With these elements, a movie could very well work. But we have to wait until almost the end of the first hour before we get any idea of who these characters are, and then it's given to us in a heavy montage of exposition. Suddenly, we're in a different movie. From a breakneck comedy of errors we're yanked into an intimate drama that wants to be social commentary. It turns out that Tae-ho had an adopted daughter, and he feels guilty for her death, and of course the robot girl reminds him of her, and just in case we've forgotten, the government is evil. But the emotional beats are too calculated, the manipulation of the audience too obvious. Once the sad flashback has done its job, we immediately return to the slapstick, and it's impossible to take this movie seriously anymore.

On the antagonist's side, the sloppy writing is even more painful. James Sullivan ("doctor, physicist, aerospace engineer, historian," "wealthiest man in the world" and, seriously, "savior of humanity") is a walking pile of evil CEO clichés taken to the cartoonish extreme. His scenes are bloated with exposition that alludes to more interesting events in the background than the ones we're watching, and the only enjoyable part about them is the actor's sincere effort to sell the nonsense he's saying (in mandatory evil British accent). In one scene, he monologues about how people's DNA reveals their moral character (which, for the record, is completely false), and he manages to deliver the whole of it with a straight face. That's being a professional.

For a movie that tries so hard to look realistic, this sort of bad science is everywhere. At the end of that early scene with the floating pen, the space elevator turns on its "artificial gravity," which, OK, we might pretend is a thing that exists in the future, except that the vehicle was already accelerating and thus should have its own gravity. Later, a search expedition for a victim in an orbiting debris zone, which normally takes days to prepare, is shortened to a five-minute launch when a larger payment is made, which is simply not how scarcity works, or logistics, or bureaucracy, or anything. But the worst instance of the movie failing to understand basic facts is the following line:

"Krypton waves have the ability to defuse nanobots..."

No point trying to decipher what this character is saying.

"... and are only emitted during the detonation of a hydrogen bomb."

"All of that is irrelevant to our presentation."

But it needed to be said anyway, because it will matter later, so to make sure we'll remember it, the movie puts it at the most incongruous moment.

A more meticulous direction could have repaired some of the missteps in the script. What we got instead is a beautiful-looking tonal mess where the wrong choice of execution was made every time. When the movie aims for serious, it's corny; when it aims for funny, it's ridiculous; when it aims for relevant, it's insufferably preachy.

But let's be charitable. Is there a meaning to this story? It seems like it's attempting to make a metaphor about how inequality forces people to treat each other as fungible assets, how desperation can twist human beings into accepting a price for the parts of life that should be invaluable. The robot girl is, after all, an intelligent lifeform, yet our protagonists have no problem with the plan to sell her, because they're so desperately broke that she's their only chance to make ends meet. But the circumstances that push them into such a choice are transparently contrived. Despite the fully integrated character of this pluriethnic society, there's a legal structure with separate civil rights for citizens versus non-citizens that is left unexplained. We're told the villain wants to enforce genetic segregation, but he does it by looking at moral choices, which he, as a doctor, should know are not genetic, and which he forces on his victims anyway. As a piece of criticism of technocracy, this doesn't work. Viewers hungry for a nuanced working-class perspective on near-space garbage retrieval are advised to watch the infinitely better Planetes.

Even without searching for a theme, it's hard to find any element in this movie's plot that makes sense. The action in the first half is driven by a sequence of misunderstandings and near-misses that is only possible because the heroes and the nameless minions alternate randomly between omnicompetent and hopelessly incapable. And there's a supposedly surprising revelation about the robot girl that should be obvious to anyone who saw her sneeze in the trailer. It's soon followed by still another revelation about her, but it's made of more bad science.

From that point on, the plot turns into a standard movie pursuit: good guys run, bad guy wants something good guys have. Then comes the reversal: bad guy seems to win, good guys fight to recover what's theirs from bad guy. As third-act movie chases go, this one is well done, filled with excitement, if sometimes over the top (the ending has the most shameless copy of the Death Star I've seen since Austin Powers), but its causal logic is tied to a secret evil plan so absurdly out of proportion with the antagonist's motivation (and so unnecessary given his resources) that the viewer has no option but to stop thinking and, I don't know, gape at how pretty space looks.

That's where Space Sweepers excels: in the art department. The shots that show us the nearly uninhabitable Earth are a gut punch, while every scene with the robot Bubs is a delight to watch. The rich bad guy's office has an appropriately menacing design, and the areas where the common people work and live feel genuinely crowded, chaotic, alive. Outer space is vast without being confusing, and spaceships wear all their scratches. The final battle is visually flawless. This oppresive version of the future appears believable on the screen, right until the moment someone speaks a line.

This movie is a world-class spectacle, impressive on a technical level, but it lacks something to say. It just looks cool for the sake of looking cool. There's certainly an audience for that content, but even some of them may get bored. We know South Korean science fiction has good writers; match them with a production budget of this size, and the results will be fantastic. Space Sweepers doesn't rise above OK.

Baseline Assessment: 6/10 still enjoyable, but the flaws are hard to ignore.

Bonuses: +2 for the quality of visual effects, +1 for building a seamlessly multilingual future, +1 for a touching portrayal of the experience of gender transition.

Penalties: −2 because the lines in Spanish are so badly mispronounced that they ruin the world's believability, −1 because the technobabble doesn't even pretend to make sense, −1 for an utterly laughable villain, speaking of whom, −2 for the harmful trope of Evil Disfigurement.