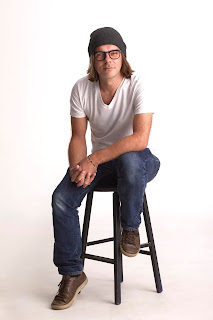 Sylvain Neuvel is the author of The Themis Files trilogy, the novella The Test (now becoming a feature film starring John Boyega and directed by Gavin Hood), and the forthcoming Take Them to the Stars trilogy, which begins with A History of What Comes Next. He has taught linguistics in India, and worked as a software engineer in Montreal. He is also a certified translator, though he wishes he were an astronaut. His girlfriend would have him believe that he has too many toys, so he writes about aliens and giant robots as a blatant excuse to build action figures (for his son, of course). Visit him online at http://neuvel.net/ or follow him on Twitter @neuvel.

Today, Sylvain tells us about his Six Books!

I just bought Remote Control by Nnedi Okorafor. I’m very excited to read it. I also finished The Oppenheimer Alternative by Robert J. Sawyer. The world’s best scientists team up to save the world. Every character in the book is a real-life person. It’s quite fascinating.

So many! The Future is Yours by Dan Frey comes out shortly after mine. It’s epistolary sci-fi, something I know a bit about. No Gods, No Monsters, by Cadwell Turnbull comes out in September. The Lesson was my favorite book the year it came out and I’m really excited for this one. Face, by Joma West doesn’t come out for a while but I was lucky enough to read it and it’s one of the most amazing things I’ve read in a long time.

There are so many I’d like to go back to but I’ve kind of given up on it. I don’t read that much when I’m writing and, right now, I’m always writing. I keep what little reading time I have for new things. Plus, I tend to like small books these days and some of my old favorites are big bricks that scare the hell out of me.

I wouldn’t say I changed my mind about it but last year I picked up The Unbearable Lightness of Being again. It used to be one of my favorites when I was younger but I couldn’t get past the first few pages. It’s not that it was bad, just very much not what I was in the mood for. I think it’s fascinating how our mindset influences how we experience a book. There are probably many books I disliked when I read them but would have loved at another time in another place.

I’ve said this so many times but the first book I read that completely knocked my socks off was Les Liaisons Dangereuses by Choderlos de Laclos. It showed me so many things: mostly that you don’t have to put everything in the book. The characters in this one all lie to each other, they exaggerate. The truth is often nowhere to be found on the page, but I loved that the author trusted me enough to figure things out on my own. Also, very bad people, the whole epistolary thing. It was probably the first time I got fascinated by the mechanics of a book.

It’s called A History of What Comes Next, and it’s about kickass, genetically identical women who’ve been messing with history for three thousand years to steer us towards the stars before we all die. The book follows Sarah and Mia, the ninety-ninth generation of these women as they push us forward during the early days of the space race while being hunted by a ruthless enemy. I really geeked out on this one. It has historical figures like Wernher von Braun or Lavrentiy Beria, Stalin’s right-hand man. It’s got plenty of science, murder, mayhem, and, of course, rockets. So if your definition of awesome includes badass warrior-scientists, rockets, murder and mayhem, this should be right up your alley.