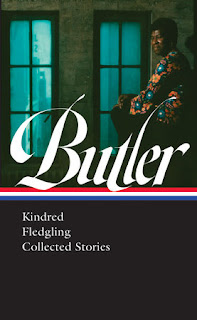 One of my reading goals for 2021 is to read the remainder of Octavia E. Butler's work, as well as revisiting some of the classics that have already earned a place on my favourites shelf. And what better way to stick to a reading goal than to tell you lovely readers about it? With Lilith's Brood, Kindred and the Parable books all read in previous years, I decided my first read would be the initial volume of the Library of America's collection of her works, containing Kindred, Fledgling and Collected Stories. I didn't reread Kindred this time - though I consider it to be as close to essential reading as any single book can be (content warnings for its depictions of chattel slavery in the US South), but I devoured the other two thirds of this bind-up, with excellent results. 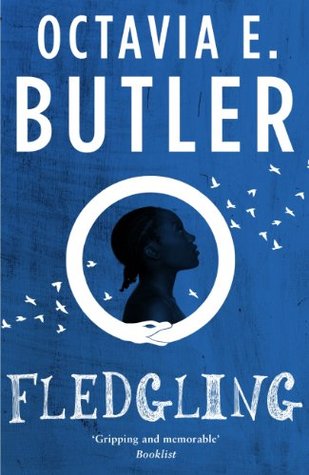 Fledgling is Butler's last completed novel, a story which stands well alone but in another world could have been the start of something much longer. It reimagines the vampire myth in a way that plays upon the psychological appeal vampires can exert on their prey, creating the Ina, a symbiont species which gathers a group of humans and forms a mutual bond with them, feeding on them in exchange for increased longevity and healing and a whole lot of mutual pleasure. The protagonist of Fledgling is Shori, a juvenile (though still super old in human terms) Ina who is the result of genetic experimentation by her mothers: unlike the rest of her species, Shori is able to control her sleep cycle and move around relatively freely during the day, rather than going to sleep or being severely burned by sunlight. As part of this genetic enhancement, Shori is Black - a fact we find out relatively far into the novel's own text, although like Kindred before it, the marketing is likely to have given this away before the reader encounters it in the story. She is also, when we encounter her, an amnesiac, and through the novel's opening chapters we piece together the fate of her family and the challenge that now faces her to re-establish her own safety and right to exist against uncertain forces determined to wipe her out.

Like Lilith's Brood, Fledgling immediately engages the reader in a world where humanity encounters a more powerful alien force, one which fundamentally challenges specific biological truths we build our self-identity and social structure around. Complicating that alien interaction is, of course, a big helping of human prejudice, and both race and gender (particularly masculinities) sit at the heart of Shori's experience, and the experiences of her symbionts. In Fledgling's opening scenes, Shori is picked up by Wright, a human man who becomes her first symbiont before she's entirely aware of her own power and what she's doing. Wright is shown as being a decent person with a basically sound moral compass before he comes under Shori's influence, but his relationship to her as a symbiont, and his acceptance of the other symbionts she brings into their "family", is clouded by his conception of his masculinity and the expectation that his sexual relationship with Shori includes an element of ownership, at least where other men are concerned. The powerlessness that comes with being a symbiont, biologically unable to challenge a structure that he's intellectually resistant to, makes for a lot of interesting tension as the novel progresses and Shori's relationships with her humans and other Ina become denser. And then there's the impact of Shori's Blackness, and the challenge it presents to those around her trying to understand the truth of her family's murder. Because the Ina have never previously had races, her extended family strongly resist the explanation that the violence done to her was a result of racism, brushing it off as a human affliction and not something they would entertain. Unsurprisingly, the truth turns out to be rather different, and the challenge which Shori presents just by existing is treated delicately but unflinchingly within the story.

Fledgling is a fairly slow narrative: it has its action sequences, but a lot of its story simply involves exploring the society of the Ina and their symbionts, and Shori's journey to rediscover her heritage and come to terms with what was done to her. It doesn't pack the same level of punch as Kindred or the Parable books - and it didn't make me ache for lost sequels in the same way that Parable of the Trickster does - but for the kind of story it's supposed to be, Fledgling deserves to stand among the best reimaginings of the vampire mythology, one that pushes the psychological elements of the myth to fascinating new levels.

The short fiction in here is an intriguing mix (all of it originally published in the second edition of Bloodchild and Other Stories), and much of it also deals with the subject of humanity pushed beyond its biological "comfort zone" to a point where societies, or even survival, look very different. Sometimes, that's about contact with the alien: "Bloodchild", perhaps Butler's most famous piece of short fiction, is an alien symbiosis story in which humans are offered a home on the planet of the alien T'Lic, in return for carrying their eggs to gestation, while "Amnesty" posits an alien society of "Communities" which gain pleasure from contact with humans, and hold economic sway over earth. Both offer complex pictures of the choices their human protagonists make, though Xuan Hoa, in Bloodchild, is much younger and at a different stage of reckoning to Noah, the older and more resigned protagonist of Amnesty. In other stories - like the post-apocalyptic "Speech Sounds", or the story of a fictional degenerative disease and those who know they carry it that is told in "The Evening and the Morning and the Night" - the challenges are more internal, though no less overwhelming. The latter, in particular, stayed with me long after the curtain fell for its strange hopefulness in the face of the inevitable. Its protagonists, both sufferers of a disease that causes people to disassociate and compulsively self-harm in later life, bond and make plans for their future despite knowing it will end in violent, self-afflicted death; when it is discovered that there might be another alternative (one which relies on a well funded private healthcare institute of the kind unavailable to most sufferers), its a moment that opens doors without diminishing the impact of the disease on their autonomy and self-preservation. It's a weird effect, one which I struggle to put into words, but which really hit home for me and made this probably my favourite story of the collection. And while I had less luck with the non-alien stories, the non fiction pieces here are well worth reading for their insights into the life and challenges of a Black woman trying to push the boundaries of science fiction in a world that couldn't fathom someone like her doing so.

I'm excited to see where my Butler reading takes me from here: next stop, the world of the Patternist, beginning with chronologically-first Wild Seed. See you then!