A fish-out-of-water tale of a Crown Princess in a foreign court, beset by enemies occupying her land, and making plans for her future in her temporary home, whether she wants it or not 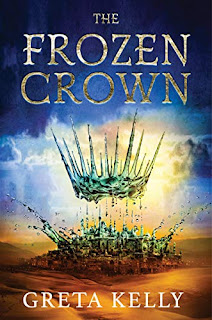 Askia, a fugitive princess far more capable with a sword than with a kind word, has a problem. The grasping, spreading Roven Empire has used soldiers and a grasping relative to take over her hands, her kingdom. Her only refuge is the only equal to the Roven Empire, the Empire of Vishir. But her past there is going to catch up to her, and even in the second power of the world, she cannot necessarily escape the Roven Empire, even as she strives for a way to oppose them to find a way to free her home.

To say nothing of a dread personal secret that nearly got her killed once before--Askia, you see, is a witch. And especially where she is going, there are many who look at fear to witches, fear that causes them to bloody action against them. It is a secret that Askia needs to keep, but the nature of her own magic makes it impossible for her to ignore it.

All of this is the matter of Greta Kelly’s The Frozen Crown.

While the novel starts us off with Askia on the run, on the edge of her former realm, the book hustles her to the site of the heart of the book in short order. It’s a good opening, showing the desperation and plight of the antagonist, and those around her. It's a good opening for establishing her bonafides, her character, and her aforementioned magical secret. It also shows the precariousness of her position and what she is willing to do to survive.

The real action and meat is when we get the fish out of water trip to the royal court of Vishir. While Askia IS half-Vishirian, and has spent time there in her youth, the consequences and history of which unwind and are revealed in the narrative, being thrown into a royal court where the rules and structure and setup and scaffolding of power are unknown helps reinforce the discomforting narrative. This is a novel that is all about discomfort, about being in a place unfamiliar, seemingly with enemies or at least neutrals all around, and a real lack of traction for her desires. And yet for all of that impotence, Askia strives her way forward by being who she is. Making Askia a hard character more comfortable with sword or her untrained magical ability than with court intrigues is a choice that always leaves the reader a little ahead of the character, since the author telegraphs some moves very cleverly that Askia herself is caught flat footed on.

This plotting, where the reader can be ahead of the main character is tricky to pull off. It’s not that Askia is incapable or weak, quite to the contrary. But to use a roleplaying game analogy, this is a character built for combat, and a potential for magic, and is thrust into a social, political situation that she doesn't have the basic skills for. She tries to learn and not sink, but its definitely far, far out of her comfort zone.

Beyond the twisting and intricate plotting, which really makes or breaks the book for a reader, and beyond Askia as a strong character, the novel carefully and engagingly builds up its world. Given Askia’s semi-outsider status, the classic technique of Askia not knowing the terrain and the populace is a well worn road that the author leverages rather well. Vishir contrasts with Askia’s own Seravesh, and as perceived, the Roven Empire. In some ways, this is really the epitome and classic “deadly decadent court”, complete with a monarch not fully in control, multiple centers of power, intrigue, and agendas. It will not surprise the reader that the Roven Empire has an ambassador to the Vishir court, and his interactions with Askia are appropriately full of menace and danger.

Of course having a foreign princess  wishing allies against the other major power in the world is a larger splash than Askia expects. (Again, a running theme of this book and this review--Askia has an inexperience (it’s not precisely naivete) with these matters that gets her into trouble, and helps drive the plot. It’s a train of worldbuilding and character that leads to tasty and interesting plot and engine. Things open up when Askia finds that there are other magicians in the Viskir Court, and her interaction with them provides opportunities for her to grow. At the same time, the fanatics with whom she has a past make their presence known, and the cycle feeds the worldbuilding and plot back into the character growth once more. This makes for a smoothly running narrative.

In addition to the smoothly running narrative, the author has a good sense of character and the internal thoughts of Askia. With the third person point of view focused on Askia, we are tied closely to her as a character and the author leverages that connection not only to give us a view on the world and explain the world but to bind us to Askia as a character. She is remarkable in being differently sided than a more typical protagonist might be, soft where others might be hard, and very hard where others might be soft.

It’s all very good...but sometimes I wish it was a bit more surprising. I am of two minds about this. In some ways it feels just a tiny bit shopworn, the beats, revelations and developments feel telegraphed and a bit overly familiar (this may also be a consequence of the amount of epic fantasy that I consume, or the breadth of that reading).  On the other hand, its very well written for what it is, and while it is familiar in many ways, it is well done and the book works for me as a comfort read. (Although very different in significant respects, Sarah Kosloff’s quartet also works in this regard--and people who like the one are going to like the other) and a reading experience for exploring the world and character that while I never had my jaw dropped, I got invested into the world and characters. The novel is the first in a duology, and it does end in a cliffhanger. You will most definitely not get a complete story here. However, despite its familiarity, the execution, right up to the cliffhanger, is engaging and makes the novel work.

Bonuses: +1 Strong writing and engaging as a comfort read

Penalties: -1 Sometimes the book runs on far far too familiar tracks and does not take enough chances with the narrative, worldbuilding or character

Nerd Coefficient: 7/10  an enjoyable experience, but not without its flaws