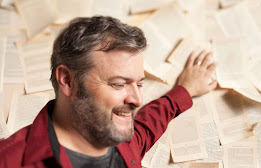 I've been following Matt Betts' career for a while now. From his pop culture short stories to his steampunk Civil War zombie thriller Odd Men Out, to his X-Men-but-darker urban fantasy Indelible Ink.  Betts writes quirky stuff that packs a wallop and then comes out of left field with a perfectly placed joke.  With a professional background in radio communications and side gigs in comedy, Betts is just the guy to pull you into any story.

Betts's newest novel Red Gear 9 has all the steampunk, airships, zombies, and wild imagination of it's predecessor Odd Men Out, along with James Bond style spyware and gadgets, and new characters and adventures.  If steampunk, humor,  and pop culture is your thing, this is the series for you!   Not familiar with Odd Men Out? The review I wrote at SFSignal can catch you up to speed without too many spoilers.

Betts has written novels, short stories, flash fiction, and has published two books of poetry.  His poem "Godzilla's Better Half" was nominated for a Rhysling Award, and his short fiction and poetry have appeared in Arkham Tales, Ethereal Tales, Bizarro Fiction!, A Thousand Faces, Star*Line, Kaleidotrope, and elsewhere, and his other novels include The Boogeyman's Intern and White Anvil: Sasquatch Onslaught.  You can learn more about Betts and his work by checking out his website, mattbetts.com, or by following him on twitter at @betts_matt.   He was kind enough to chat with me about Red Gear 9, and the fun of returning to world of Odd Men Out.  Let's get to the interview!

NOAF: What's the elevator pitch for Red Gear 9? And as much as I love the cryptic title, could you explain it?

Matt Betts: Red Gear 9 takes place just a few months after Odd Men Out ends. It opens with a Confederate spy named Reeves breaking out of Alcatraz after being stuck there for years. He and his fellow escapees find themselves in a new world of airships and hordes of the dead. As they prepare to make their way home to their families in the east, old contacts tempt them back into the life they went to prison for.

The crew of the Polk from the first book are hot on the trail of the escaped prisoners, and determined to keep the peace. Three of their best officers, Cyrus, Bethy, and Lucinda race to stop the convicts before the criminals either disappear into the vast reaches of the two Americas, or burn everything down.

The title is one of my homages to the spy genre of movies and books. As we go through the novel, we find it's the equivalent of James Bond's '00' designation. The Red Gears are the book's Confederate version of elite spies and clandestine operatives. In the story, I suggest that most of the Red Gears were rounded up after the truce, captured during the war (with some still languishing in prisons) and others dead. I tried so many different titles for these undercover soldiers but none of them stuck, but when I came up with Red Gears, I figured that was a pretty excellent title for a steampunk novel. 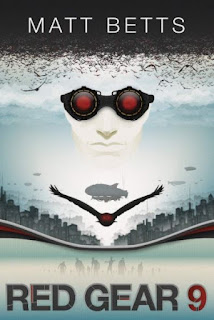 NOAF: Odd Men Out came out in 2013, and has meta pop-culture references that all these years later, I am still giggling about. When did you get the idea to write the sequel, Red Gear 9, and what was it like to return to this world?

MB: I really loved the world, too. When I finished with OMO, I really wanted to revisit it, but I was kind of burnt out with all the writing and revisions. So I wrote a couple of other books and outlined three books in the same world as OMO. Once I got started on Red Gear 9, I ended up combining two of the stories I outlined and making it one. On their own, the plots were too thin, so I took the best of each and they worked well together.

I do include a pop culture reference or two in this book as well, but nothing quite as overt and fun as the one you like from the first book. I really had fun creating the main character, Reeves. I made him a combination of Boyd Crowder from the Justified TV show, Tom Cruise from the Mission Impossible movies and James Bond. He's a Confederate spy who's been in prison for years, so when he breaks out, he's a little rusty, but still somewhat savvy. He was in prison when the chewer outbreak started and wasn't prepared for it. I equip him with various cool (for the era) gadgets and a network or sort of trustworthy people. He was fun to create because I really got to channel those inspirations to ask "How would Ethan Hunt handle this... if he were in Civil War-era America?

NOAF: Can readers who are new to the series start with Red Gear 9, or is it imperative that they read Odd Men Out first? For the newbies who are starting with Red Gear 9, what should they know about this world, before diving in?

MB: I've had that conversation with a couple of my beta readers. They were split on whether they thought it could stand alone or if you needed to read them both. I think they finally came down to the thought that it could stand on it's own, but reading OMO would certainly enrich the reading of RG9.

To catch anyone up that hasn't read the first... It's set in a world where the Civil War ended in a treaty so that both sides could fight off an outbreak of men who've come back from the dead. The story itself begins long after the truce, where we find Cyrus and his friend Lucinda joining a peace-keeping force called the Office of Military Operations. The group was created to keep the peace, but in the course of the novel they also fight rebels, chewers, circus folk and other surprising enemies. 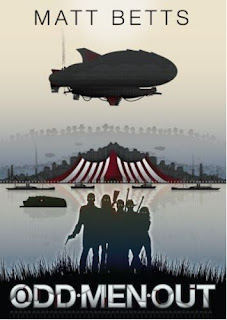 NOAF: This series takes place in the 1860's, and writing alternate history can be tricky. What research did you do for the historical aspects of this story? How did you decide what historical aspects to stay true to, and which to play fast and loose with?

MB: The research and those kinds of decisions are so much fun when writing alternate history. I started by asking what would happen if the Civil War was interrupted by a zombie outbreak. What would change as far as the war is concerned? As far as the rest of the world?

I used the internet quite a bit for things like Civil War battle maps, fort locations, personnel lists and firearms. I hit the bookstores and libraries to check out other details I might want to pursue. I enjoyed the illustrated books I found with colorized pictures from the Civil War. Those brought some ideas to life for me and humanized the officers a little more. For Red Gear 9, I contacted park officials at Alcatraz Island and they were very helpful in pointing me to Civil War-era maps of the place. I also used my family history records when writing OMO. We were lucky enough to have a good stack of information about one of our relatives who was shot during the fighting. I borrowed a few details from his medical records and muster rolls, which was fun.

As for what to keep and what to change, it really depends on what I needed for the story. I did research on various weapons and where they were used during the war, then I looked a little further ahead in history to see when certain innovations came about. If they were pretty close together I figured the fight with the chewers could accelerate the research for those items. In fact, one of the plot points in Odd Men Out involved a warehouse of things a scientist was developing. In RG9, there's a scene where several men are walking through these weapons, and trying to figure out how they all work. Another thing that caught my eye in research was the fact that both sides in the war had used balloons for one thing or another. This helped me design how the airships in my books might work and how they got started.

MB: I think the new character, Reeves, was the most enjoyable to write. There are several new characters in this book, but he was the most fun to figure out. The returning characters from the first book felt like they were ready to go, broken in already. These new ones, especially Reeves, took a little while to figure out, and really weren't crystal clear until maybe the final draft. There were so many questions that he left hanging for me until I actually wrote him into the manuscript, where I would think "OH! That's why he would do that." or "That's how that situation might resolve itself better." Being this amalgam of spy tropes in my head made me want to push him into more and more interesting and difficult situations. I have at least two scenes that I was sad to cut, but they served no other purpose than to show off his spy skills and how good he was at his job.

NOAF: Without giving any spoilers, can you tell us what scene in Red Gear 9 was most challenging to write, and how you got through it?

MB: Without spoilers... There's a big fight toward the end that involves almost the whole cast of characters. I think the challenge, was to make it interesting and clear. I didn't want it to be "this person shoots this other person, so that guy punches this guy..." through the whole scene. I think what got me through it was figuring out who the most important person was as the scene progressed. Since I use different points of view for each chapter, I had to know who had the most to lose or gain as the fight went on. So, once that was figured out, it hopefully clarified things for me as the storyteller and for the reader. I may even admit to using action figures and whiteboards to block out the fighting, much as a director might do for a play. I needed to know where everyone was throughout the airship at any given time, and that seemed like the best way!

NOAF: Who are some of your favorite writers? How has their work impacted you as a writer, and as a reader?

MB: I'm a big scifi fan, but I have to admit I probably read more crime novels than anything. I love Elmore Leonard's work. He told the best stories of criminals, while also giving them unforgettable personalities. His dialogue is something I try to emulate as much as possible - believable conversations. He liked to keep things simple and brief without a lot of embellishment. I also like Carl Hiaasen for the same reasons.

I've also read a lot of Stephen King. In fact, I started writing because after reading some of his work, I said "I can do that." Eh, it wasn't so easy. The thing about King's earlier work is that he makes them seem pretty simple. The plots aren't terribly intricate, but his characters, his details and nuances make the story have some emotional resonance with the readers. And that makes his work more accessible to me than some other authors I've read.