Two Ships in the Night

Every few months, someone tweets/posts/whatever something along the lines of "why are there even sex scenes in movies/shows/books" and then everyone feels the need to pile on because it's a bad take and piling on bad takes is fun and easy. There are a innumerable silly debates regarding media, particularly when it comes to sex and relationships. The TL;DR of it is that all of them can be with merit and worrying about if they are needed is an exercise in futility.

There is one relationship that I don't believe gets enough attention, and that is simple, healthy friendship. Obviously, there are multitudinous platonic relationships in every form of media out there - fine and good. But I was struck watching, of all shows, Sons of Anarchy, by the sheer number of times some form of "I love you" was said. Not in a romantic sense, but simply one man to another.

It's interesting, in a show that is about a LOT of complicated relationships, most them fantastically unhealthy, that affection is expressed so directly - especially by men. Because, yes, there is no shortage of male friendships in media, and certainly no shortage of bro type movies, and the term bromance is a thing, yet men are still expected to have this hypocritical and harmful notion of masculinity.

"Sex sells" is the common refrain. That's true - "shipping" is a whole... thing. Which, again, fine- it's not unworthy, and it's definitely a fun exercise. But media is simultaneously a reflection of society, and a driver of it, and in a world where men are often taught expressing emotion or affection somehow makes you less of a man, that you shouldn't act or dress in certain ways - let's normalize all that.

For all the failures of the Star Wars 'Sequel Trilogy', this wasn't one of them. Poe and Finn had an earnest, deep connection. The ship crowd definitely ran with it, and while I would have 100% loved for Star Wars to provide representation on the big screen for a historically underrepresented demographic - I loved that they were friends, that they cared about each other, and they expressed that in tangible ways.

If I have a point to make, it's this: take the time to tell the people you love that you love them. Be yourself, let your feelings show. And if you write books, movies, video games, comics, whatever - give a moment to ponder the sincerity of the friendships and relationships in your work. 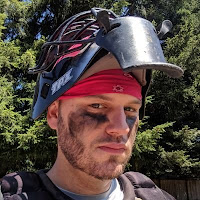 Dean is the author of the 3024AD series of science fiction stories. You can read his other ramblings and musings on a variety of topics (mostly writing) on his blog (which he hasn't updated in, like, forever). When not holed up in his office  writing, he can be found watching or playing sports, or in his natural habitat of a bookstore.
Posted by Dean E.S. Richard at 12:00:00 AM

Email ThisBlogThis!Share to TwitterShare to FacebookShare to Pinterest
Labels: Dean is angry again, Dean Smith-Richard, probably not as nerdy as it should be, Star Wars
Newer Post Older Post Home