Microreview [book]: A Song with Teeth by T. Frohock

The conclusion to Los Nefilim harkens back and ties up plots and characters, including those from the previous novella trilogy, in a winning and engaging fashion. 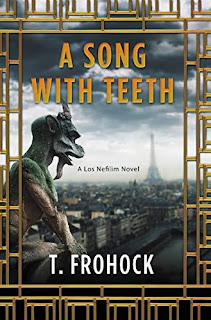 T Frohock’s Los Nefilim Trilogy follows the story of a group of angel and demon descended beings who reside in Spain. The Los Nefilim, as befits their supernatural nature, are born and reborn again and again, and have a society and social structure, conflicts, power plays and relations with unknowing humanity. It’s like World of Darkness’ Masquerade, but with beings more in line with In Nomine.  In the first two novels, starting with Where Oblivion Lives, we saw how various factions of Los Nefilim took on opposite sides of the conflict that became the 1930’s Spanish Civil War. This is not a world where Los Nefilim control and subjugate humanity secretly, the horrors of humanity are firmly caused by humans, but they do indeed influence and bring out the best and worst in people. By the end of the second novel, Carved From Stone and Dream, many of the Los Nefilim have had to abandon Spain and the darkness of Franco’s regime, for France, just in time for the Second World War.

Now, in A Song With Teeth (with the side exception of a brief opening in 1942), the year is 1944. France is under the Axis heel, the Allies hopes of an invasion are stymied because of supernatural help to German defenses. The remnants of the Spanish Los Nefilim, living in France in exile from Franco’s rule, and dodging the Axis occupation, do not have a lot of room to maneuver to try and help, even though they try. There are the Daimons, the demon descended members of their species, corrupting, dangerous, self interested.  The local French Les Nefilim, devastated by the German occupation.  And the German Los Nefilim, Die Nefilim, are out and out working with the mortal Axis Germans. The greatest test for Los Nefilim: Diago, Miquel, Guillermo, Ysa and all the others, is here and now, in the stews of war and occupation, in France.

The novel does a great job out of the gate doing something that is out of fashion among many fantasy novels, and that is recapping previous events in an expository fashion before we dive into the narrative. I think more novels could take a page from Frohock here and take this tack, especially for very complicated worlds, character threads and overarching plots that either require a photographic memory on the part of the reader, or a lot of snow shoveling of recollection on the part of characters--Frohock does do calling back all the way to the original trilogy of novellas, trying and binding the threads, personal and overarching, that have been part of the narrative since the beginning. Readers who have read In Midnight’s Silence, Without Light or Guide, and The Second Death will find additional enrichment in this volume, particularly of the new trilogy as there are plenty of callbacks to the events of the novellas, but readers who started off with this trilogy or even this volume are well taken care of in learning who is whom and what is going on.

A real source of strength and power in these novellas is the use of characters. We’ve followed as readers Diago, Miquel and those around them for several books and novellas now, and there is real joy in the character development and character interactions that Frohock has brought to the series. There is real triumph and tragedy when family members, on opposite sides of conflict, must choose how to deal with one another, this is compounded by the fact that, generally, you will meet again in future lives. (although the threat of extinction, the Second Death, is the ultimate and most devastatingly card to play that even the antagonists of the book will not use except sparingly) , The queer Miquel and Diago relationship, and their relationship with Diago’s son Rafael, finds it final and ultimate flowering in this book. Guillermo’s relationship with his adversary, his brother, Jordi, shows the promise and peril of a fraternal relationship where siblings both hold power and cannot abide the plans of the other. Guillermo’s daughter Ysa really comes into her own in this novel, becoming a full fledged and fully take charge member of Los Nefilim. Aside from the Diago-Miquel-Rafael trio, hers was the story I felt the most resonance with, and I felt that the author poured a lot of heart and soul into Ysa’s story.  It is these sorts of characters, their relationships, how those relationships make and drive the plot, is the reason, I feel, to immerse yourself in the author’s work.

The overall plot, then, is much more born of these relationships than a grand meta-plot of events grinding, although, like the previous novels, she has a hell of an engine for that--the Second World War here (as opposed to the Spanish Civil War in the first two novels). Los Nefilim sympathetic to the allied cause are trying to undermine the Germans, trying to help paver the way for the eventual liberation of France, but the various factions all have personal and individual things to bring to account.But, again, it’s the personal relationships and what they do, sometimes harkening back to previous lives long ago, that really drives the narrative and the overall plot. This novel is a little looser than the previous two (which dealt with a power struggle in the first book, and an exodus in the second book) in that overall structure, but wrapped up in the characters, the relative lack of a superstructure is not a weakness.

I want to highlight a more granular level of joy in this book (and Frohock’s writing in general) and that is the use of sensory description. There was a bit of a debate on twitter between authors who “Describe food” versus “Describe fashion”. And it is true that in fantasy that authors tend to fall into particularly types of description and descriptors and ways of invoking the environment. Various authors invoke and evoke the world of their novels through particular stratum or entry points. L.E Modesitt, for example, can be counted on to have vivid and descriptive descriptions and recountings of food, be it in Recluce or in his science fiction (no “food pills” for HIM). But what Frohock does here in this novel and in all of her writing is to work the senses, and not just one, like sight. No, she mixes sight, and sound, and smell, and taste and touch and effectively brings place, and feeling and emotion in her writing in a vivid way. Frohock’s stories never suffer from white room syndrome, and she does it by mixing up and varying which senses are brought to the table. It really helps me immerse myself into what the characters are experiencing, and more authors could take lessons on how to do that by studying her writing.

Overall, it's a fantastic ending to a series of three novellas and three novels. There is one little bit I would have liked to have had the author tie in. Way back at the beginning of the sequence, the overarching concern was the potential gift of a superweapon from the infernal realms to powers here on Earth. Keeping that weapon out of the hands of those who would do horrible things with it has been one of the voices in the fugue that is the Los Nefilim sequence. I would have liked a little more touching back to that thread (it gets mentioned, but not quite as deeply or resonantly as it might deserve)

In this world and moment in global history where authoritarians and fascists rise to try and overturn the results of Democracy, the story of the Los Nefilim is potent, resonant and a story that needs to be told. Not only as a warning and as a cautionary tale of where societies can go in the darkness of evil, but the good things and the positive things that are worth fighting for. Love, be it straight, queer or platonic. Friendship. Loyalty. Family, found and by blood. Doing what’s right and trying to build a better world, even while standing in the ruins of the old.

I look forward to what Frohock writes next. T., I will watch for you.

Bonuses: +1 for well researched and resonant historical grounding and background for her secret fantasy history.

+1 for vivid, emotion packed and sensory rich writing that draws the reader into the world and characters.

Penalties: -1 A couple of plot beats of the series and arc don’t quite resolve satisfactorily