The Scholomance's potential is squandered in the dead angles of its worldbuilding. 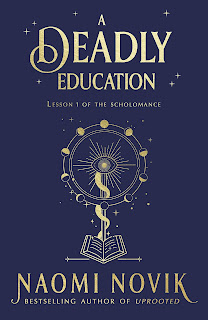 Sometimes, books are very easy to talk about, and reviews write themselves: things are great (or maybe not great, but still notable), and I am very excited to point them out! Other books are not easy to talk about, and when that happens it's usually a failure to connect: a book that was probably fine, but which left me without much that I'm desperate to convey about it, and looking for the right words to describe the experience is a more active challenge. And then... then you get books like A Deadly Education, Naomi Novik's latest offering. This book is hard to talk about because, wow, where do I start.

Well, let's start with the basics. A Deadly Education is set in a magic school with the horror dialled up to eleven: set in the Scholomance, a school which annually scoops up a mostly-preselected group of magical teens from around the world and dumps them in an educational facility mostly located in a void dimension (which, in turn, is located in the UK, because where else would a magic boarding school be??). There appears to be a fully fledged, functioning society beyond the walls of this magic school, but we only catch glimpses of it through flashback, because for four years the students of the scholomance are locked in without adults, holidays or even any school supplies that aren't either brought in through freshers or provided at the whims of the school's magical replenishment. This is because in this version of our world, magical kids are walking magnets for various magical monstrosities which view them as soft, tasty targets to devour. The school is supposed to protect them from this fate, but monsters are nothing if not persistent, and every year only a fraction of the top class gets the opportunity to graduate, and an even smaller percentage makes it through graduation, because graduation (you guessed it) involves even more monsters.

The reader is guided through this nightmare scenario - in a lot of descriptive first person prose - by El Higgins, a Junior year student (sure, this international magical boarding school in the UK has an internal structure based on the US high school system, why wouldn't it) who is fighting an uphill battle not just to stay alive against the monsters, but to do it alone, while trying to control a magical aptitude that wants to push her towards being mana-sucking evil sorceress with an arsenal of destructive spells. El hasn't made any friends during her stay at the Scholomance so far, but she's biding her time for a big magical gesture that will make everyone around her pay attention and ask her to join their team for graduation, maybe even getting her into a wealthy, protected magical enclave in the process. Complicating this plan for survival is Orion Lake, her year's big superstar, whose own affinity means that he's saved an impressive proportion of his own year from being snacked on by monsters before graduation. That's great news for everyone who hasn't been a monster snack, but bad news for the class about to graduate, who are facing an unusually busy and hungry graduation "ceremony" when they leave the school.

El is a rather dense and self-sabotaging protagonist, so when Orion starts showing an interest in her - first as a suspect in another student's murder, but then as, shock horror, an actual friend - she decides this is terrible, actually, and spends a lot of time trying to shake him off. But it's too late: Orion's interest in her gets El noticed by the wider student body (especially the students of the elite New York enclave to which Orion belongs) and also pushes her to start thinking about choosing her own friends, notably artificer Aadhya and dark-mage-gone-clean Liu. Readers who are wondering if maybe this is the book where Novik will push these interesting female relationships into the foreground over having the day saved by heterosexual attraction: sorry, nope. El's chosen friendships do play an important role, but they're ultimately second fiddle to her relationship with Orion and the plots surrounding that, and it's El and Orion - from among the main cast, at least - who end up saving the day.

This book has been strongly criticised for its handling of race, and particularly one thoughtless (by the author's own admission) and racist passage involving Black hair. Beyond this, there's been a range of reactions, both positive and negative, from reviewers of colour reacting to the broader setting and how the international setting of the Scholomance is handled. As a white reviewer, it's not my place at all to pass judgement on the points raised, but there's no escaping the fact that El's world is a mix of the kind of diversity you get on Captain Planet or the Star Trek bridge, with students from every continent and culture apparently converging in this corner of Void!Britain and slotting into a mostly homogenised school culture. Language is a big part of spellcasting, and most students, El included, have a curriculum focused on learning as many languages as possible in order to cast spells in them. There's also a very obvious but unremarked upon prevalence of white characters in the key positions of power (the New York and London enclaves) that El finds herself butting heads with. El herself is mixed race, but was raised by a white British mother and rejected by her Indian relatives due to her magical affinity. There's nothing inherently problematic about that - characters of colour shouldn't have to justify themselves with some threshold of cultural performance to exist, and there are plenty of mixed race and diaspora people who grow up without strong cultural connections to some or all of their heritage. But it's impossible to ignore the fact that real world prejudices and inequalities do appear all around this worldbuilding, even if the setting is supposed to be divorced from that context.

As a reader, my reaction to those prejudices being replicated in an ostensibly representative text is to look to whether I trust the author to be doing something intentional and therefore potentially worthwhile: is this book trying to say something, or am I just experiencing the author's dead angles replicated on the page? Passages like the description of locs, or another moment where El identifies a language worksheet as being "modern" Arabic because it has cartoon depictions of terrorist acts on it, make it really hard to interpret A Deadly Education as doing anything but the former. And, sure, there's a lot of books and authors out there doing worse things, and caring a lot less - and in many ways, it's A Deadly Education's commitment to trying to imagine a genuinely diverse, international magic school that makes its dead angles so obvious - but that doesn't make the failings here less disappointing, especially as this is a book that had resources for sensitivity reading.

Frankly, this kind of thing leaves me tired. The Scholomance is an interesting take on a trope that still has great potential, but I don't want to read about societies of international sorcerers, and their special magic schools in a story that expects white wizards of the US and UK to be the centre of power within that international system. It doesn't help that, despite enjoying her previous work, there are other elements in the kinds of stories Novik seems to want to write that are exhausting to me too: I am tired of having interesting relationships between women dangled in front of me and then pushed aside for heterosexual pairings that are at best "meh" and at worst super creepy, and I'm tired of stories that subvert their subgenres on the surface while still being tied to the same patriarchal nonsense as their predecessors. A Deadly Education is, in many ways, an enjoyable book: a bit grim, a little slow to start, and very invested in its explanations, but ultimately a lot of fun. But as a multiple award winner and nominee, I think Novik's work asks to be held to higher standards than that, and this is a book that falls short in a number of unfortunate ways.

Bonuses: +1 El is an entertaining, if dense, narrator to follow around the Scholomance, and her relationships with Aadyha and Liu are fun to watch

Penalties: -2 racist slip-ups and apparent unconscious biases make it hard to trust where this is going; -1 I simply did not ask for another Naomi Novik book where the main character gets into a heterosexual romance with the embodiment of the patriarchy