Microreview [book]: Give Way to Night by Cass Morris

The follow-up to From Unseen Fire continues the story of the Vitellae family in an alternate Rome with magic. 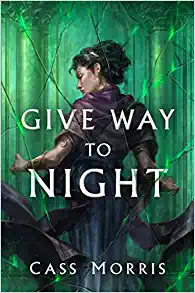 In Cass Morris From Unseen Fire, we were introduced to Vitella Secunda (second daughter of the Vitellae family), Latona, her sisters, and the world of Aven. “Alternate Rome with Magic” is a shorthand for Aven that works to a point --history doesn’t quite match up perfectly, although it certainly rhymes with the Roman Republic we do know. With the death of the Dictator (a Sulla analogue), Aven is in a precarious political position. Sempronius Tarren, a composite of Gaius Julius Ceasar and Pompey, has ambitions of his own, and soon finds himself connected with Latona and her family as they all fight to keep Aven together, both in the city and abroad. That novel ended with Tarren and Latona having blunted the immediate threat, and Tarren headed off to Iberia to deal with an uprising, and Latona in Aven dealing with her burgeoning powers.

Give Way to Night continues all of these stories and splits the narrative between Iberia, where Tarren has gotten a command (and the Vitellae son, Gaius has been there since the first book), and Aven itself, focusing on Latona and her magic-less elder sister Aula, and her younger sister, Alhena. Like Latona, Alhena is a mage, too, although with very different, more prophetic gifts, which grow in potency and power as the novel unfolds.

The first book did a lot of the groundwork that this novel takes full advantage of. We learned about Aven and its late Republic Rome analogues (often really on the nose, even using the same terms for the political factions) and introducing us to the set of characters that take stage in this novel. With the slow build gone and things ramping up, this novel launches into a two headed narrative feet first (making this novel not a good way to start the series, it fully assumes you have read the first novel and while it touches on events of the first novel, that laid down worldbuilding and setup are indispensable) . The novel takes place in Aven (or more generally, Truscum (Italy) and in Iberia (Spain) in a pair of narratives with Latona and Sempronius as the major viewpoint characters, but with a spread of other points of view on both sides of the conflicts. Morris is definitely of the school that “POV solves everything” and carefully uses viewpoint to show all facets of what is going on, and develops a range of character personalities, problems, and voices thereby.  Things escalate quickly, and while there are chances and places for the reader and the characters to catch their breath now and again, this is very much a novel where the protagonists are backfooted by their foes over and over again.

The forces of Chaos (in a Moorcockian sense) definitely press matters as much as they can. In that, we get battles, dark magic, battles, magical entanglements, political scheming, and personal struggles. I cheered when a character finally made a personal choice that I wondered when it was going to happen since the start of Unseen Fire, and in general, character growth is something the Vitellae women in particular get a fair amount of. The men in the novel are a little less well run down the tracks that way (although they do go through challenges). This is a novel which, like the first, centers on its female characters and develops and grows them throughout the novel.

I have spoken in many reviews about the idea of an off-ramp for a first book, a way to stop the reading of a series in a neat way at the first book, but with the opening of going on to the second book there. This second book, however, takes no such pains to provide an off-ramp for the reader, and in point of fact ends in a rather startling, shocking and suspenseful cliffhanger for the fate of a major character. The plot lines of the novel do resolve well, but it is the personal plots and drives that do not tie off, casting off into the future of the third novel. In point of fact, aside from the cliffhanger, a number of characters come to rather pointed crossroads or changes that look to drive the third novel. This again is in keeping with the aforementioned character growth.

That is the ultimate strength of the first and now the second novel. It’s not an expy copy of Rome and the events of the rise of Gaius Julius Ceasar, and the author is not trying recapitulate those historical beats (even if you substitute Iberia for Gaul). These novels, Give Way to Night in particular as the series gets into high gear, is a much more personal and character driven set of narratives. Not only the protagonists, the Vitellae family, and Sempronius, but also the two sets of antagonists--the ultimate foe within Aven, and Ekialde, the chieftain of the Lusetani, who really sets himself as the antagonist against the forces of Aven in Iberia, they all have very personal drives, wishes, hopes and desires that don’t always orthogonally fit in with a black and white narrative. Neitin, Ekialde’s wife, clearly comes in here for Morris’ use of her point of view to provide a conflicted point of view on the “enemy camp” - she supports and loves her husband, but the methods he turns to in his quest to drive back the outsiders causes her to doubt and reconsider the wisdom of those methods. But again, its not just an intellectual exercise--its tied to her love for her son. And given what we learn about the force behind the antagonist in Aven, I could find sympathy even there, for reasons the characters within the novel might not understand, but I, as a reader, do.

I had high hopes but also slight fears when I picked up Unseen Fire, and I did wonder about the roughness of a bit of the aspects of that novel and a couple of missed opportunities. This novel builds on the foundations of the first novel as things kick into high gear. It’s an improvement on all fronts, taking the sturdy but sometimes imperfect standard of the first novel and moving forward strongly on nearly all fronts. (Some of my criticisms of the first book DO apply but the verve of this book as opposed to the slow build of the first did make me think about those flaws much less). The brick city that Morris built in the first novel is starting to transform itself into marble, and I fully hope that the third book completes that transformation.

Bonuses : +1 for a character focused reading experience that is strong and plot driving

+1 for more excellent worldbuilding that makes for an epic historical fantastic reading experience that is rich and rewarding.

Penalties: -1 some of the unexamined social ideas in the first novel are still left disappointingly untouched.