Microreview [book]: Queen of None by Natania Barron

Natania Barron’s Queen of None explores a highly underutilized, if not outright forgotten figure in Arthuriana, to create a potent story from a new and fresh perspective. 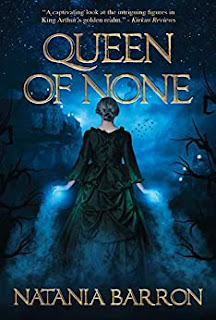 It emerges, if you read the early sources, there are other figures in Arthuriana that did not extend into the later takes on Arthur. Not only the Welsh stuff, but it turns out that Geoffrey of Monmouth, author of the History of the Kings of England, stated that Arthur had another, full sister, Anna. This is a character that disappears from later Arthur texts, or gets melded into characters like Morgause. But what would she have been like if she was a character in full flesh and form, coming back to Camelot after being married to King Lot of the distant Orkney islands, but now returned to Arthur’s Court?

Anna’s story is the heart of Queen of None, by Natania Barron.

Natania has a MA in English with an emphasis on Medieval Literature, so tackling Arthuriana is in the very center of her wheelhouse. I had never heard of Anna before this book, and with such scant text on her as her before she gets dropped, combined with other characters, transmorgified, or plain forgotten, the author’s tack on the character is delightfully metatextual: Anna, you see, is given a prophecy by Merlin that she will be utterly forgotten. And when she comes back from the end of nowhere, the Orkney islands, with her dead husband’s crown to lay at Arthur’s feet, her goal is to avoid that erasure from the world and history.

This character oriented plotting, a hallmark of Barron’s fiction, gets a full Arthurian workout as we get a unique perspective on Camelot (here, Carelon). Gawain here is Anna’s son, for instance, and the author explores how Anna relates to the other women in Arthur’s court, and those who come to court. This is a novel that makes me think of The White Princess TV series, where we see a story that we know from a strongly female oriented perspective, giving new light, new life and new interpretations of various characters and relationships.

One way in which Barron does that that I want to highlight and talk about briefly, is how the author decidedly queers Camelot. The center of this, is Anna’s realization that, as the novel progresses, is that her brother has her re-married to Lance because he wants to keep Lancelot in his Court, not only because of his sword arm, but because he lusts after him as well. Lanceloch (Lancelot), whose vows of chastity has made his own martial bed with Anna a cold one at best, and is thus caught on the horns. There is other queer eye in the novel, but having the Arthur-Anna-Lanceloch relationship firmly queer is a strong and bold choice that helps drive the character relationships and the plot and fleshes out the world.

And such a world. Carelon straddles lines and boundaries. It’s not the gritty, end of Roman Ages Britain Camelot that is popular nowadays, and it is not the fully romanticized view of those times, turning them into faux Medieval times, either. Magic is strange, dangerous and relatively “low” - very much in the sword and sorcery sort of mold. Anna herself has been using magic, even without her knowing, subtly.. As the novel progresses and her desire to escape the prophecy of Merlin, and her opposition to Merlin, she winds up making a choice to learn even more magic, a magic that will eventually change the face of her, Merlin and Carelon.

And it is that slow burning campaign and the magic that she weaves of Anna’s that is the real story of the novel. For, you see, Anna realizes that to tangle with Merlin, she needs to become someone else, and so she crafts a magic that allows her to slip into another person, a new person, a person who might get close enough to Merlin in order to exact her retribution.

You already know the name, if you’ve read the Arthurian mythos. Anna creates, and inhabits a young woman named Nimue.

The author relishes in Anna/Nimue’s world and her, THEIR, interactions with the characters and giving us a full and rich picture of her life, but the novel has a slow and building tempo that accelerates as Anna’s goals start to become within reach. But as Anna and Nimue continue their slow approach, the boundaries between the two become blurred and just who really is the real person, the real force at court becomes not at all clear, even for Nimue supposedly being Anna’s servant. The use of point of view, switching between Anna’s first person and Nimue’s third person, is a masterful use of language to their stories as they wind up their plot.

Along that way, intersecting stories of the rest of the Court, come in and out. This feels like the inverse of a typical Arthurian novel, where Arthur and Gwen are a center and side characters’ stories intersect tangentially with theirs. Here, the tangents are elements of the Arthurian mythos that are more typically foregrounded. The novel spans years, decades, even in this under-represented pair of perspectives and Barron makes Carelon and it’s cast of characters seem as new and untrodden as when I first saw the banners of the knights of the  Round Table at the Metropolitan Museum of Art Arms and Armor wing and asked what they were. That is no mean feat.

Bonuses: +1 for a unique and amazingly vivid perspective on Arthuriana that rewards readers familiar with the mythos.

+1 for excellent use of language and point of view to immerse the reader into the characters and story.

Reference: Barron, Natania. The Queen of None [Vernacular Books 2021]