Microreview [book]: The Mask of Mirrors by M A Carrick

An epic fantasy that sets a high bar for itself, and winningly meets its own standards. 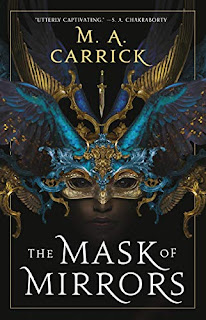 On the mean streets of the Venice-inspired city of Nadezra, young Ren’s life is not a good one. Under the thumb of the criminal Ondrakja, her existence is precarious and dependent on her capricious moods. Is it any wonder that she takes decisive action to get her and her siblings to escape, by poisoning her?

Now, years later, Ren is back. Now she’s an adult, and with Tess, her skills have morphed into con artistry of a high order. She has a plan for wealth and power by targeting the weak and precarious noble family of Treamentis. Once the Treamentis was one of the leading families of Nadezra, but they have fallen on very hard times, a crumbling ruin of their former glory. But by posing as Renata Viraudax, a daughter of Letilia, a family member who fled long ago, Ren can infiltrate herself into high society and make some good coin. She has enough inside knowledge of “Renata’s” mother that she can socially engineer this. And as the Gods as her witness, she will never go hungry again. But it is a tough assignment, the Treamentis family are wary even given Renata’s polished patter, a local crime lord turned respectable businessman is suspicious of Ren, and just what are a number of the city nobles up to?

But that's not all by half. Ren’s major problem, unbeknownst to her, is that as she tries to infiltrate and fleece the family, she will be drawn, despite herself, into a plot that could topple the entire city, and everyone, including Ren, within it. There are dark forces afoot indeed. Ren is no hero, but when the city of her birth is existentially threatened, she might have to become one, like it or not.

This is the story of M. A. Carrick's - the pen name for authors Alyc Helms and Marie Brennan - The Mask of Mirrors.

Let’s set this up as a three card spread of Pattern Reading. In Nadezra, the tarot-like cards are used for fortune telling. There is the standard nine card spread, and then there is the simpler and more straightforward three card spread. The book goes into detail regarding this, as it forms a strong strand of the worldbuilding and the plot as well. Cards have positive and negative aspects, adding to the complexity of a potential reading, and providing maneuver room for interpretation. So where did this book come from, where does it stand in the course of this review, and where is it going? 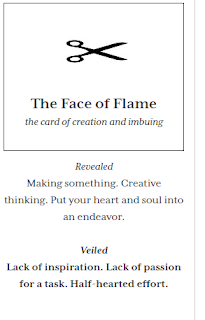 The Face of Flame:

Making Something, pouring their heart and soul in the endeavor

This book is, very clearly, a labor of love from the two authors. This is the authors giving their all to characters and a world, not stinting on any of the good parts, putting it all out there and hoping that it is good enough and that it will resonate with readers. From the complex and complicated worldbuilding, to the richly described verse we have here, to the strong central character of Ren, it is clear that the authors decided to shoot for the moon. 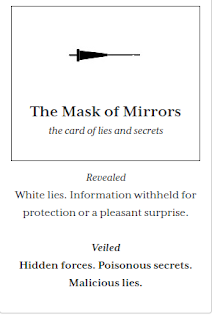 The Mask of Mirrors.

And here we come to my review and a rather appropriate card, being the title of the book itself. There is a lot I want to talk about in this review, and yet there is a lot I feel I should withhold, as that pleasant surprise for readers. There are plenty of pleasant secrets, lies, revelations, and things uncovered in the novel that it would be difficult for me to spoil everything and everything about it. 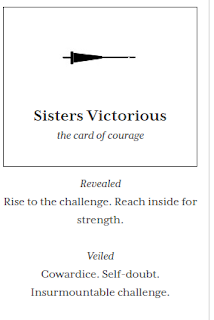 Rise to the Challenge. Reach inside for Strength. The negative side works well to talk about here. This book started as something that seemed insurmountable--something written for fun between Alyc and Marie. It was not something that I think anyone imagined could become a real life book--and yet, they rose to the challenge, reached inside for strength and now have a series to write. Can they build on the success of something they started for each other for fun into a series?

I’ve already mentioned Ren in the context of her posing as Renata Viradaux, but Ren is a complicated character. In the keeping of “threes” as being a foundational number, there are really three Rens.. There is the Ren of her youth, the thieving urchin. There is Ren in her guise as the noble Renata. And then there is her alternate  guise as Arenza, a fortuneteller of the Pattern. Her deck of cards, the only thing she has of her deceased mother, is not only a totemic object for her, but it seems that it has power of its own--or is it that Renata herself does? As the titular Mask of Mirrors card indicates, there are plenty of secrets and revelations in this novel. Many of them swirl around Ren, and we get flashbacks to her life on the street in addition to the opening sequence that sets her early life in the city, and provides the foundation for both of the present day Rens...and more than harkens back to her past in current events.

Three is indeed a magic number. Three members of Ren’s adoptive family (herself, Tess and Sedge -- and can we talk about the interesting worldbuilding we have in this novel about families, both by blood and by choice) Three cards to the short spread. Nine (three threes) for the longer spread. Three living members of the Treamentis family that Ren is trying to infiltrate--Matriarch Donaia, and her children Leato and Giuna. Other numbers, particularly two and five, resonate throughout the novel. The authors do a great job with these patterns and structures and the more I read, the more I found, and I encourage you to do the same. Quaerendo Invenietis!

So let’s talk about Nadezra and the world the authors have created. Nadezra has a base chassis that is definitely meant to invoke Renaissance italy. Canals, masks (an important part of the culture), an entrepot of a port that connects far flung places, a oligarchy of powerful families in control, (a moon to the distant sun of other powers, Nadezra starts off with that chassis and then runs with it in fantastic invention. There are a number of magic systems and magic elements to the city--from the aforementioned Pattern cards through relatively inexpensive magics common to the city, to curses (and their removal)  to the geometric numinatria, geometric magics that range all the way from the small to complex and strange rituals that can affect the entire city. There is no one single magic structure here, there is a variety of them coming into contact, a reflection and a metaphor for the two cultures and peoples that make up the city. The authors reflect the worldbuilding of the local population and the ruling elite and their relationship and cast that across not only social relations, but magic, belief systems, and more. Nadezra is a much more socially complicated place than that original inspiration of Venice (or, frankly, a lot of other fantasy cities which are also inspired by Venice). The undercurrents of competing cultures and power create a rich tapestry for the city and its characters.

And such characters. Ren with her tripartite aspects is the center of the novel, and forms a trio with her found family Tess and Sedge. The Treamentis form another nexus of characters, in and of themselves even beyond Ren’s attempt to insert herself into that family. Then there is Vargo, a criminal gangster turned respectable businessman, or attempting to be the same. He is very much like a Wilson Fisk character who is trying to shed his disreputable past and insert himself in the upper echelons of society. He has an uphill climb, not only because he is a lower class Vraszen trying to be part of the dominant minority Liganti upper crust and so there is a double barrier there to his rise. Vargo was for me the most fascinating character beyond Ren herself, and he has complexity and depth to match. A novel of the events here with him as  primary, rather than secondary point of view would be fascinating (although it would prematurely reveal some of the mysteries about him that we get as the novel unfolds). The authors provide a variety of other characters from across the spectrum of societies, with interlocking and interdependent relationships. The world of the novel is very queer friendly as well, and this is a tolerance that is baked in on all levels of society. This is simply a world where queerness is normalized and accepted.

The plotting is clockwork. While our entry into the world is Ren's impersonation, it is through that and the other characters that the greater overarching plot, and its elements, slowly become clear, an interlocking series of gears. By the time the reader (and Ren) is immersed into her own plot, she is also interlaced into the main plot, and with the reader joins the main story, and takes action. There is plenty of action and adventure to go along with the social maneuvering. As I mentioned above, the authors shot for the moon in putting everything they love--worldbuilding, characters, action, adventure, intrigue, grand plots, petty criminals and much more. And it all works together. It could have been easily a farrago but under the skilled writing here, it comes together into a wonderful package.

I do admit that with such a large cast on display, a couple of secondary characters could possibly have used another beat or two of character development (Tess, I am looking at you) and this is a complex secondary world fantasy that I would not hand to someone new to the genre. Otherwise, however, this is a collaboration that hits all the marks that I had hoped it would given the track record of the collaborators. It is clearly the first of a series, but it provides a solid complete story here that you can off ramp should you decide that you only want a one book visit to Nadezra. As for me, I look forward to what subsequent volumes will bring. M A Carrick, in the personage of Helms and Brennan, are really just getting started.

+1 for an intriguing and central main characters, whose strengths, flaws, character arc and depiction are all top notch.

Penalties: -1 A couple of the secondary characters could have used a tad more fleshing out. Hopefully book two will provide this.